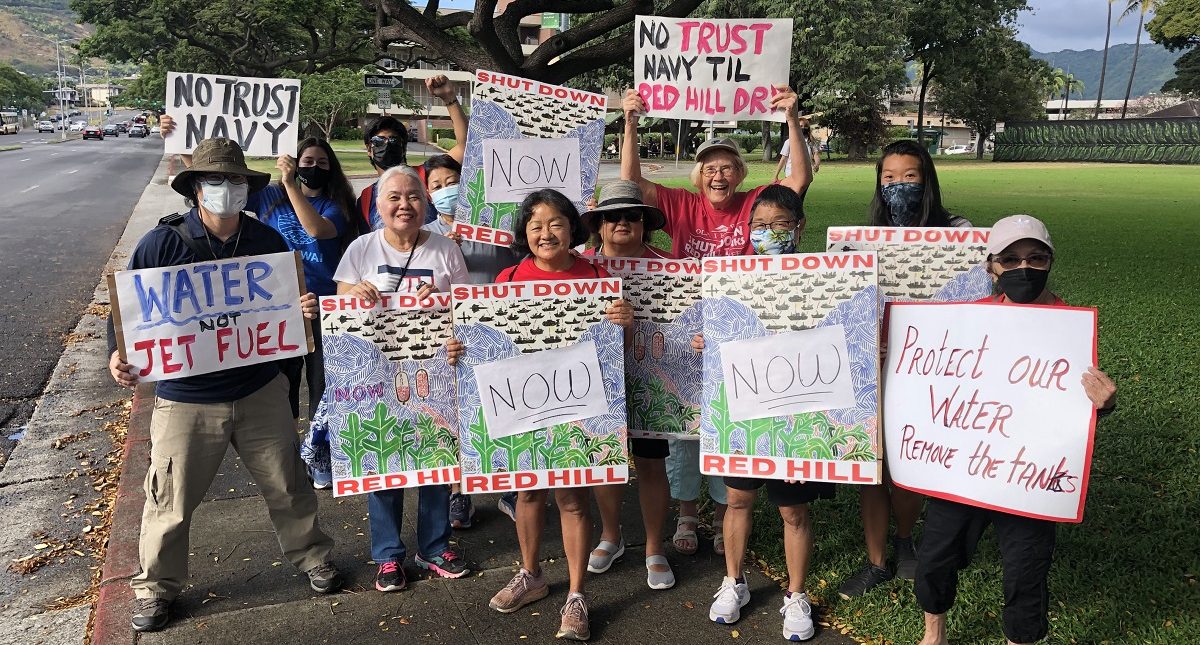 $1.1 Billion And Counting For Navy’s Obstinance In Shutting Down Fuel Tanks

Total Congressional funding for all aspects of the Navy’s Red Hill water contamination debacle is now over $1.1 billion according to Hawai’i Congressional representative Ed Case and billions more are needed to complete clean-up, defueling and closing of the massive leaking Red Hill jet fuel storage facility.

In a news release on March 9, 2022, Rep. Case said, “These funds ($700 million)  are in addition to the $403 million in emergency funding we obtained in another bill we passed just weeks ago, bringing Congress’ total funding for all aspects of Red Hill in the current fiscal year alone to over $1.1 billion.  But billions more will be required to complete all aspects of the cleanup, stabilization, defueling and closing of Red Hill and the relocation of its fuel and build fuel storage capacity elsewhere.”

The Red Hill funding appropriation includes $50 million to the Navy for planning and design of future water treatment and distribution infrastructure projects to address the Red Hill drinking water contamination.

A paltry $5 million was included for the improvement of the safety of underground fuel storage tanks at Red Hill as the Navy works to defuel the facility.

The majority of the Red Hill funding includes “$686 million for continued support to displaced service members, civilians and their families.” Thousands of military families were housed in Waikiki hotels for up to three months and were provided temporary living allowances for food and other services.

The appropriation requires the Pentagon give Congress a report within 90 days that would identify future military construction and remediation requirements for Red Hill’s permanent shutdown.

While the Red Hill water crisis strained relations between military leaders and lawmakers, Hawaii’s congressional delegation has lobbied their Congressional counterparts to increase military budgets and operations in Hawaii and the Pacific, not only for Red Hill issues, but other military items, including the “will-it-ever-die” Homeland Defense Radar and Pearl Harbor shipyard.

After two months of military teams “flushing” main pipes and household water taps in the affected areas and testing of only 5% of the 9,715

homes, on March 17, 2022,  the Hawai’i State Department of Health cleared the drinking water for the last of 19 zones that contained military and civilian family housing and Navy operational buildings that were contaminated by jet fuel.

With the amendment of the health advisory, the military housing offices for the residential areas notified by email residents from the Joint Base Pearl Harbor-Hickam (JBPHH) commanding officer stating their water is safe to drink.

The families who are still occupying temporary alternate lodging are expected to return to their residences within two days.

Military families who have returned to their homes are reporting air contamination in their homes with many persons having headaches and needing to leave their homes for fresh air.  Tap water poured into pans is still showing sheens of fuel. Pets are still refusing to go into yards that have been sprayed with water from sprinkler systems.

Additionally, three months into the health crisis, the military has still not sent a toxicology team to the military medical facilities to help address the long term health concerns of the families.

The Honolulu Board of Water Supply has now appealed to Oahu residents and businesses to voluntarily reduce their water consumption with 20% of Honolulu’s drinking water wells offline in an attempt to reduce the jet fuel plume from moving into more of O’ahu’s aquifer.

Should voluntary water reduction not work, a mandatory reduction will occur in the summer months.

Citizen activism continues to shut down Red Hill in less than the projected one year The Department of Defense projects.   The possibility of further major leaks remains a possibility as long as the massive 20 story jet fuel tanks contain fuel only 100 feet above Honolulu’s water supply.

Many Native Hawaiians say the success in the shut down of Red Hill fuel storage facility may be a turning point for the wider island community to join Native Hawaiians in challenging the military’s role in Hawai’i.

University of Hawaiʻi Professor of Hawaiian Studies Kamanamaikalani Beamer said at the heart of that conflict is the military’s terrible record of care of Hawaiʻi’s natural resources.

“Trust is based off of historical relationships and evidence and people’s behavior and all we really have to go off of here in Hawaiʻi, unfortunately, is a series of actions that have been negligent to our islands’ resources,” Beamer said.

Healani Sonoda-Pale, a Native Hawaiian community leader, said, “It’s unfortunate that this crisis happened, but the silver lining is being able to raise the consciousness of other communities and groups that otherwise would never actually critique the role of the military here in Hawaiʻi.”

The water contamination at Red Hill brought together federal, state and local officials as well as a large and vocal group of citizens in opposition to the massive jet fuel storage tanks remaining open.

Sonoda-Pale said the “community’s perception of the military will play a critical role in conversations around its soon-to-expire state land leases, such as the Pohakuloa and Kahuku training areas.”

The strained relations of the Hawai’i public with the U.S. military caused Rear Admiral Tim Kott, Commander of the Navy Region Hawaiʻi, to issue a statement that the Navy is deeply committed to restoring the trust of all people of Hawaiʻi, including Native Hawaiians.

“We know, however, that process will take time and must be earned through our actions not just words. We’ve committed to the closure of Red Hill and have made great strides to return safe drinking water to families in military housing; however, much work remains.”

“As we continue our efforts to close the fuel storage facility, we hope to work with the Native Hawaiian community to help guide us towards a better future that balances the interests of the environment, the native host culture, as well as the nation,” Kott told Hawaiʻi Public Radio.

Ann Wright served 29 years in the US military and retired as a Colonel. She was also a US diplomat and served in US Embassies in Nicaragua, Grenada, Somalia, Uzbekistan, Kyrgyzstan, Sierra Leone, Micronesia, Afghanistan and Mongolia. She resigned from the U.S. government in March 2003 in opposition to the U.S. war on Iraq. She is the co-author of Dissent: Voices of Conscience.