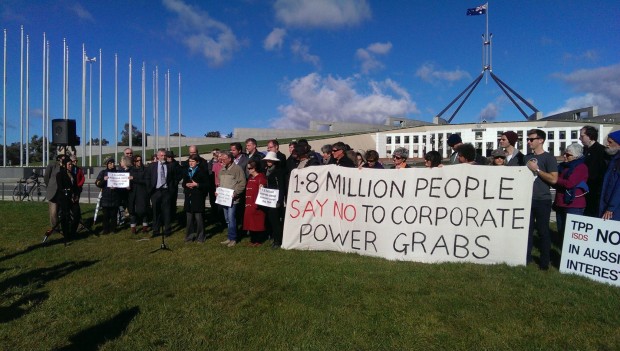 1.8 Million People Call For TPP To Be Made Public

A petition of more than 1.8 million people worldwide, calling for the controversial Trans-Pacific Partnership (TPP) to be made public has been delivered to Australia’s Parliament this morning.

Australian Parliamentarians and representatives from a range of Australian and international organisations, including 350.org, Avaaz and SumOfUs, have joined forces to call on the negotiating Governments to disclose the details of the TPP.

The TPP is a highly secretive and expansive free trade agreement between the United States and twelve countries in the highly biodiverse Pacific Rim, including Australia, Mexico and New Zealand. To date, it has been negotiated in secret with no external input other than that of 600 corporate lobbyists.

Leaked text reveals that the deal would empower corporations, including big oil, coal and gas companies, to directly sue governments in private and non-transparent trade tribunals over laws and policies that they allege reduce their profits.

“The TPPA will undermine decades of work by progressive governments, citizens and NGOs to protect our climate and environment from exploitation. In particular, efforts to move our economies beyond fossil fuels will face major obstacles, as the TPP grants the fossil fuel industry new rights to ignore legislative wins we secure to limit fossil fuel investment and expansion,” said Charlotte Wood, 350.org Australia Campaigns Director.

Policies designed to address climate change, curb fossil fuel expansion and reduce air pollution could all be subject to attack by corporations as a result of the investor-state dispute settlement clauses (ISDSes) currently contained within the TPP. Additionally, the deal could criminalize internet use, undermine workers’ and human rights, manipulate copyright laws, restrict government regulation of food labeling and adversely impact upon subsidized health-care.

ISDSes in existing US Free Trade Agreements, have enabled companies like Exxon Mobil and Dow Chemical to launch more than 500 cases against 95 governments. Over $3 billion has been awarded to corporations to settle these cases, 85% of that money going to oil, gas, mining and natural resource industries. Currently, Canadian oil and gas company Lone Pine is suing the Canadian government for $250 million over Quebec’s moratorium on fracking.

“With climate change accelerating at an ever-increasing pace and our communities and ecosystems under attack from coal, oil and gas extraction, the TPP would deliver a massive free-kick to the fossil fuel industry to ramp up its radical expansion agenda. It is incumbent upon our governments to release and then stop this damaging deal and put people and the planet ahead of profits,” said Wood.