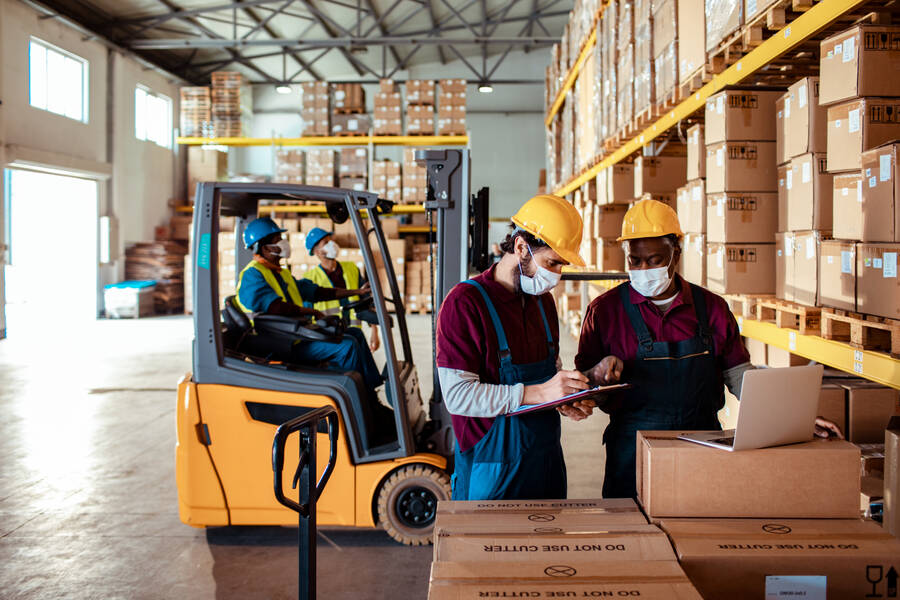 Above Photo: Close up of a group of workers working in a warehouse. Marko Geber Via Getty Images.

A stunning 24% of workers in the temp industry say they have had their wages stolen from them by their employers, according to a survey, released Feb. 3, that examines cycles of poverty and precarity for the industry’s disproportionately Black and Brown workers.

The findings are based on surveys carried out by seven worker advocacy groups, including the National Employment Law Project (NELP) and Temp Worker Justice, across the country. In the study, 1,337 temp workers in 47 states answered questions about pay, safety, job mobility, workplace discrimination and employer retaliation.

Temporary staff, or temp workers, are hired by staffing agencies to work at a worksite run by a host employer. They typically do the same jobs as their direct-hire counterparts, but often receive less pay and few to none of the same benefits, according to the report.

Today, temp workers in the United States are some of the least protected in the world, even with record-high staffing agency profits and an accelerating demand from companies for temp workers during the pandemic. From April 2020 to November 2021, the volume of temp jobs grew at 2.5 times the rate of jobs in all other private sector industries, according to the report.

Despite already low wages, 24% of workers surveyed reported their wages were stolen either through an employer that paid less than minimum wage, failed to pay overtime, or didn’t pay employees for all hours worked. Wage theft is so common in temp work that it is consistently categorized as one of fifteen industries on the Department of Labor’s list of “Low Wage, High Violation” industries.

While wage theft in temp work is rampant, it’s not limited to this industry. A 2017 study found that, in the 10 most populous states in the country, 17% of low-wage workers say they were paid below minimum wage. And a September 2021 study from One Fair Wage, a workers’ rights group, found that 35% of tipped workers had suffered wage theft over the last year.

A lack of transparency around industry practices and outcomes has kept workers and advocates in the dark and hindered efforts to improve working conditions, said Dave DeSario, a former temp worker and now director at Temp Worker Justice, one of the groups that worked on the survey. The report is a first step toward debunking myths about temp work that sustain unequal pay and unjust working conditions.

“The only reason people work these, you know, poverty-wage jobs that could be paying a lot more is because they believe that if they work hard, they’ll get something better,” DeSario said. “We as workers, need to take a critical look at this industry and put out the truth about what is going on.”

Staffing agency profits come from the markup, or the difference between what the agency bills the host employer and what they pay the temp worker. According to the report, markups can range widely, from 30% to 150% of temp worker hourly wages, which can create a race to the bottom and drive temp wages down.

In addition to wage theft, the industry is plagued by low pay. Al White, 60, had worked as a temp in Chicagoland warehouses for over three years. He says at all of his assignments, he not only made barely over minimum wage, but also made $4 to $6 less per hour for the same jobs permanent employees were doing.

White described the wages he made as “just making just under broke, you know. It’s just enough to pay the bills.”

Temp agencies may target people who are undocumented or reentering the workforce after incarceration and have limited work prospects, according to the report. Although White had little choice but to work as a temp because of a conviction record, he was told the temp work would be a path to permanent employment. He was wrong.

“I think they misled us because, constantly, every new assignment you get, they tell you that you have the possibility of getting hired full-time,” said White, who never got any call backs about permanent roles, even after applying for roles at host employers that he had worked as a temp for over a year.

“You’re always eligible [for a permanent job], but you never get the job,” he said.

Unfortunately, White’s experience is similar to most temp workers. The survey finds 72% of workers were misled about an aspect of the temp assignment or the likelihood they would be converted to a permanent hire, and over 70% of workers surveyed had never been hired into a permanent position after working temp jobs.

Some agencies intentionally deter employers from hiring temp workers by writing into their contracts provisions like “no poach” clauses, barring an employer from hiring temp workers, or “conversion fees” that require companies to pay high fees to hire temp workers, according to the report. The economics of ‘permatemping’ are straightforward for staffing agencies, said DeSario. “The longer someone works as a temp, the higher the markup rate.”

Although some ‘permatemps’ work for years on end at the same job, few receive the same benefits — only 6% of all temp workers surveyed reported having access to paid vacation days and 4% reported their staffing agency makes contributions to a retirement account.

Lax workplace training policies for temp workers can also leave them more vulnerable to injury or illness. Almost 20% of workers surveyed reported they never received safety training and another 23% reported they “only sometimes” did. At the onset of the pandemic, 43% of temp workers reported they received no new training on how to stay safe from COVID.

The report includes recommendations on how to improve conditions for temp workers from both a policy and organizing standpoint. Several of the policies suggested, like pay parity mandates and strict limits on the duration of temp work, have already been implemented in other countries.

Organizing temp workers alongside their direct-hire counterparts can be mutually beneficial, according to the report. 80% of workers surveyed were interested in joining a union in order to improve their working conditions, a finding that dispels a stereotype in organized labor that temp workers are anti-union. Temp workers have historically been used by employers to divide workers and break up unions, but that’s not because the workers themselves are opposed, said DeSario.

“They’re not there because they want to break the union. They’re there because management wants to, and is taking advantage of workers that desperately need work,” he said.

Jannelle White works to bridge the gap between organized labor and temp workers as the director of the Temp Worker Union Alliance Project. She believes the survey’s findings reflect the attitudes of the many temp workers she’s had conversations with.

“You have temp workers that are ‘permatemps,’ that have been temping for years and really take pride in the work they do,” she said. “At the end of the day, they just want to be treated with respect and learn a living wage.”

For Al White, that’s exactly why he started organizing through Warehouse Workers for Justice and is speaking out about his working conditions as a member of the National Temp Worker Council at Temp Worker Justice.

“I don’t plan on changing anything as an individual,” said White. “But, collectively, through the organizations I support collectively, we’re trying to get temp workers paid fairly and be able to organize their workplace.”