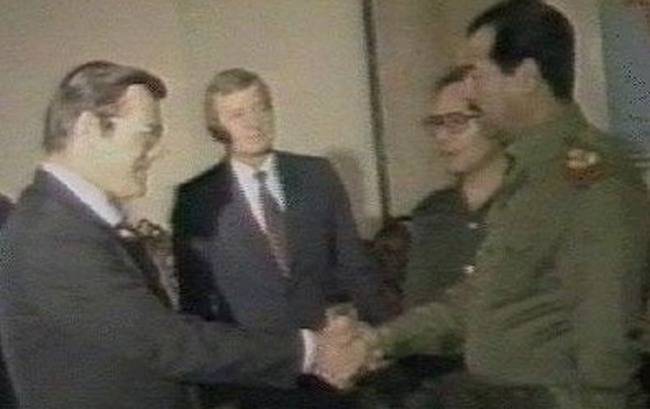 Washington doesn’t merely lack the legal authority for a military intervention in Syria. It lacks the moral authority. We’re talking about a government with a history of using chemical weapons against innocent people far more prolific and deadly than the mere accusations Assad faces from a trigger-happy Western military-industrial complex, bent on stifling further investigation before striking.

Here is a list of 10 chemical weapons attacks carried out by the U.S. government or its allies against civilians.

During the Vietnam War, the U.S. military sprayed 20 million gallons of chemicals, including the very toxic Agent Orange, on the forests and farmlands of Vietnam and neighboring countries, deliberately destroying food supplies, shattering the jungle ecology, and ravaging the lives of hundreds of thousands of innocent people. Vietnam estimates that as a result of the decade-long chemical attack, 400,000 people were killed or maimed, 500,000 babies have been born with birth defects, and 2 million have suffered from cancer or other illnesses. In 2012, the Red Crossestimated that one million people in Vietnam have disabilities or health problems related to Agent Orange.

White phosphorus is a horrific incendiary chemical weapon that melts human flesh right down to the bone.

In 2009, multiple human rights groups, including Human Rights Watch, Amnesty International, and International Red Cross reported that the Israeli government was attacking civilians in their own country with chemical weapons. An Amnesty International team claimed to find “indisputable evidence of the widespread use of white phosphorus” as a weapon in densely-populated civilian areas. The Israeli military denied the allegations at first, but eventually admitted they were true.

After the string of allegations by these NGOs, the Israeli military even hit a UN headquarters(!) in Gaza with a chemical attack. How do you think all this evidence compares to the case against Syria? Why didn’t Obama try to bomb Israel?

In 2004, journalists embedded with the U.S. military in Iraq began reporting the use of white phosphorus in Fallujah against Iraqi insurgents. First the military lied and said that it was only using white phosphorus to create smokescreens or illuminate targets. Then it admitted to using the volatile chemical as an incendiary weapon. At the time, Italian television broadcaster RAI aired a documentary entitled, “Fallujah, The Hidden Massacre,” including grim video footage and photographs, as well as eyewitness interviews with Fallujah residents and U.S. soldiers revealing how the U.S. government indiscriminately rained white chemical fire down on the Iraqi city and melted women and children to death.

4. The CIA Helped Saddam Hussein Massacre Iranians and Kurds with Chemical Weapons in 1988

CIA records now prove that Washington knew Saddam Hussein was using chemical weapons (including sarin, nerve gas, and mustard gas) in the Iran-Iraq War, yet continued to pour intelligence into the hands of the Iraqi military, informing Hussein of Iranian troop movements while knowing that he would be using the information to launch chemical attacks. At one point in early 1988, Washington warned Hussein of an Iranian troop movement that would have ended the war in a decisive defeat for the Iraqi government. By March an emboldened Hussein with new friends in Washington struck a Kurdish village occupied by Iranian troops with multiple chemical agents, killing as many as 5,000 people and injuring as many as 10,000 more, most of them civilians. Thousands more died in the following years from complications, diseases, and birth defects.

5. The Army Tested Chemicals on Residents of Poor, Black St. Louis Neighborhoods in The 1950s

In the early 1950s, the Army set up motorized blowers on top of residential high-rises in low-income, mostly black St. Louis neighborhoods, including areas where as much as 70% of the residents were children under 12. The government told residents that it was experimenting with a smokescreen to protect the city from Russian attacks, but it was actually pumping the air full of hundreds of pounds of finely powdered zinc cadmium sulfide. The government admits that there was a second ingredient in the chemical powder, but whether or not that ingredient was radioactive remains classified. Of course it does. Since the tests, an alarming number of the area’s residents have developed cancer. In 1955, Doris Spates was born in one of the buildings the Army used to fill the air with chemicals from 1953 – 1954. Her father died inexplicably that same year, she has seen four siblings die from cancer, and Doris herself is a survivor of cervical cancer.

The savage violence of the police against Occupy protesters in 2011 was well documented, andincluded the use of tear gas and other chemical irritants. Tear gas is prohibited for use against enemy soldiers in battle by the Chemical Weapons Convention. Can’t police give civilian protesters in Oakland, California the same courtesy and protection that international law requires for enemy soldiers on a battlefield?

7. The FBI Attacked Men, Women, and Children With Tear Gas in Waco in 1993

At the infamous Waco siege of a peaceful community of Seventh Day Adventists, the FBI pumped tear gas into buildings knowing that women, children, and babies were inside. The tear gas was highly flammable and ignited, engulfing the buildings in flames and killing 49 men and women, and 27 children, including babies and toddlers. Remember, attacking an armed enemy soldier on a battlefield with tear gas is a war crime. What kind of crime is attacking a baby with tear gas?

8. The U.S. Military Littered Iraq with Toxic Depleted Uranium in 2003

In Iraq, the U.S. military has littered the environment with thousands of tons of munitions made from depleted uranium, a toxic and radioactive nuclear waste product. As a result, more than half of babies born in Fallujah from 2007 – 2010 were born with birth defects. Some of these defects have never been seen before outside of textbooks with photos of babies born near nuclear tests in the Pacific. Cancer and infant mortality have also seen a dramatic rise in Iraq. According to Christopher Busby, the Scientific Secretary of the European Committee on Radiation Risk, “These are weapons which have absolutely destroyed the genetic integrity of the population of Iraq.” After authoring two of four reports published in 2012 on the health crisis in Iraq, Busby described Fallujah as having, “the highest rate of genetic damage in any population ever studied.”

9. The U.S. Military Killed Hundreds of Thousands of Japanese Civilians with Napalm from 1944 – 1945

Napalm is a sticky and highly flammable gel which has been used as a weapon of terror by the U.S. military. In 1980, the UN declared the use of napalm on swaths of civilian population a war crime. That’s exactly what the U.S. military did in World War II, dropping enough napalm in one bombing raid on Tokyo to burn 100,000 people to death, injure a million more, and leave a million without homes in the single deadliest air raid of World War II.

Although nuclear bombs may not be considered chemical weapons, I believe we can agree they belong to the same category. They certainly disperse an awful lot of deadly radioactive chemicals. They are every bit as horrifying as chemical weapons if not more, and by their very nature, suitable for only one purpose: wiping out an entire city full of civilians. It seems odd that the only regime to ever use one of these weapons of terror on other human beings has busied itself with the pretense of keeping the world safe from dangerous weapons in the hands of dangerous governments.