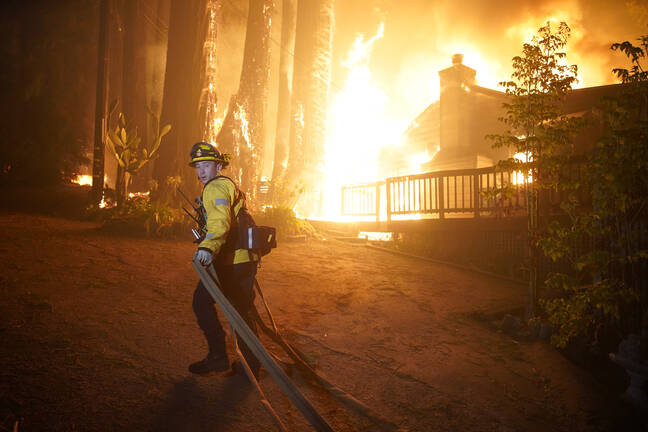 Above: Firefighters work to protect homes surrounding residences engulfed in flames in Boulder Creek, California, on Saturday, August 22, 2020. Dylan Bouscher for MediaNews Group and The Mercury News via Getty Images.

From Record Heat To Wildfires To The One-Two Punch Of Hurricane Laura.

Pick almost any slice of time in the recent past and you can find clues to how climate change is jacking up dangerous weather extremes. Because of greenhouse gas pollution, this year will end up as one of the hottest three on record. In the last 30 days, all-time high-temperature readings in the United States outnumbered record lows 86 to zero, and for the year-to-date, the ratio of heat records to cold records is 212 to 11. In the 1950s, the ratio was one-to-one.

Given these trends, it’s no surprise that one of the recent record highs may end up being the hottest temperature ever reliably recorded on Earth, 129.9 degrees Fahrenheit, on Aug. 16 in California’s Death Valley. Maxx Dilley, climate program director with the World Meteorological Organization, said the potential record is still being investigated, but it’s clear that, with global warming, many more such records will be set in the years ahead.

“We’ve got this closed system. We’re on a ball floating through space, with a thin skin of gas around us,” he said. “We’re changing the composition of the atmosphere with pollution in a way that traps more heat. This is going to continue as long greenhouse gases continue building up.”

In the 10 days after the potential global heat record in Death Valley, an unusual lightning storm blasted California with more than 11,000 lightning strikes that sparked hundreds of fires; more heat records were set in the Northern and Southern Hemispheres; unprecedented flooding in Asia washed away villages and threatened China’s Three Gorges Dam; and twin hurricanes threatened the Gulf of Mexico, with Hurricane Laura generating a storm surge as high as 11 feet that pushed far inland along the Texas and Louisiana coast.

Here’s how these extreme events unfolded over a 10-day period. 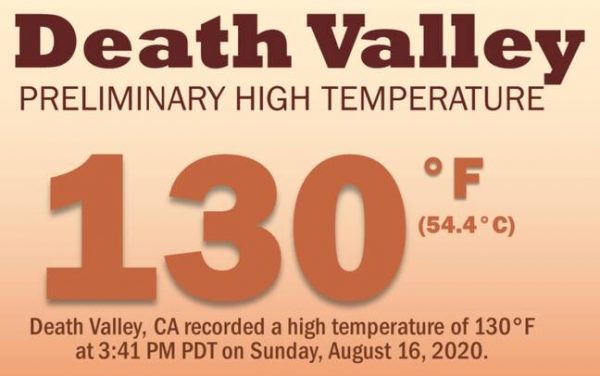 “It’s very reminiscent of the summer of 2018, with record heat across the Northern Hemisphere all summer long,” she said. “Even without triggering any tipping point we see pretty intense impacts of climate change right now. These heat waves are not very rare in the world we live in today, and the common thread is climate change.”

Heat extremes can fuel other extremes, and on the night of Aug. 16, the hot, dry air from the deserts clashed with moisture from the northward-drifting remnants of Tropical Storm Elida in the skies above Central California and triggered “probably the most widespread and violent summer thunderstorm event in memory for Bay Area,” climate scientist Daniel Swain said on Twitter.

More than 11,000 strikes of lightning sparked hundreds of fires, some of which combined into extreme conflagrations, threatening towns, forests and water supplies. According to NASA, global warming may result in fewer lightning storms overall in the West, but a 25 percent increase in the strongest storms, with a 5 percent increase in lightning. More lightning during the West’s dry season means more wildfires.

As California started burning, Japan, on the other side of the Pacific Ocean, was also experiencing extreme heat, tying the national record of 106 degrees Fahrenheit that was set just a couple of years ago, in 2018. The concern in Japan isn’t wildfires, but the combination of heat and humidity. Recent research shows that parts of Asia, in particular, are close to a deadly climate threshold that will test the limits of human survivability.

By Aug. 18, at least 15 large wildfires were burning along the length of California, from coastal forests in the North, to the mountains east of Los Angeles, in an unusually early onslaught of flames. Global warming causes “whiplash weather” in the state, Swain found in a 2018 study that described sudden shifts between extreme heat and drought and extremely wet years. This year, grasses and shrubs grew quickly with abundant spring rains, then dried up to become fuel for fires under a series of withering summer heat waves. Those extreme swings will increase by 25 percent statewide and as much as 100 percent in Southern California in the second half of the century, the study concluded.

A summer of flooding in China peaked with concerns about the potential failure of the recently completed Three Gorges Dam, the world’s largest hydroelectric facility. Record rains fell during the intense monsoon season, displacing millions of people. Global warming will drive even more intense rainfall in the future, because a warmer atmosphere holds more water (7 percent for every 1.8 degrees Fahrenheit warming). And scientists have also documented how ocean currents that transport heat energy, moisture and stormy weather are shifting closer to southeastern Asia. Extreme rainstorms have contributed to other recent dam failures in California and Michigan.

If Three Gorges Dam fails…. besides millions of lives lost, it would be catastrophic for the ENTIRE world, particularly the US.

See later in thread for simulation of dam fail.

BC its China, how desperate the situation is is unknown.https://t.co/sVLViw2tQS

What happens in the tropics doesn’t always stay in the tropics. On Aug. 20, Tropical Storm Kyle, which formed off the East Coast of the United States, merged with another storm and hammered southwestern Ireland with hurricane-force winds. Such systems are not unprecedented in Ireland, but this one came much earlier in the year than normal, with record-strong August winds. Research shows that the paths of destructive tropical storms could shift significantly in the decades ahead, potentially putting the Northeast coast of the United States at much higher risk.

Until recently, the relatively cold waters of the North Atlantic have buffered northwestern Europe from tropical weather systems, but that may be changing, said Anders Levermann, a climate scientist with the Potsdam Institute of Climate Impact Research. “If we increase the temperature of the Atlantic further, Europe loses its shield, its cold barrier against hurricanes,” he said. “This is also physics that is quite straightforward, and we see it already happening. Global warming is slowly eroding this protective barrier.”

Even as California’s fires were exploding at a record pace, burning across nearly 1 million acres, a new climate threat was forming on the other side of the country. Twin hurricanes taking aim at the Gulf of Mexico at about the same time is something even long-time hurricane experts have not seen. Yet experts have been warning for years that the overheating oceans will provide more fuel for storms. Some storms are intensifying faster than ever before, and there have been record-setting hurricanes in most ocean areas in just the last five years.

I’ve never seen two hurricanes forecast to cross paths ~36h apart in the Gulf of Mexico. #Marco and #Laura are serious concerns for the next several days. US Watches possible later today – for two different areas. Incredible (and not good!) 🌀🌀 pic.twitter.com/cMj6uU0ZHv

In between the wildfires and the tropical storm threats, a 2,000-mile swath of the United States extending from Seattle to Dallas was gripped in drought. All of Nevada, as well as Arizona, New Mexico, Utah and Colorado, reported drought conditions. In late August, the persistent dryness helped propel the Western Colorado Pine Gulch Fire to become the largest on record in the state.

The Drought Monitor map is updated every Thursday to show drought conditions across U.S. https://t.co/1PTGCkIOzM pic.twitter.com/Nmg8C1WpIk

The states that come together at the Four Corners are at the center of the longest drought on record in the modern era, one that shows no signs of ending. Arizona’s big cities have been plagued by extreme heat, with 50 days of temperatures of at least 110 degrees Fahrenheit. In fact, global warming is probably pushing the region toward a so-called megadrought that could last centuries. And the heat-drought cycle is one of the climate’s clearest self-reinforcing feedback loops—extreme heat dries up soil, which then heats up more than moist soil because the sun’s incoming energy goes to warming rather than evaporation.

Meanwhile, on the opposite side of the planet, tropical northern Australia also reported record high temperatures for the month of August. For the first time on record, a winter heat wave broke the 40 degree Celsius (104 degrees Fahrenheit) mark, continuing a remarkable run of exceptionally hot years and seasons in Australia. Just like in the United States, the changing climate has been linked with extreme and destructive wildfires, including some that burned in areas that are not adapted to burning.

Widespread heat continued across the Northern Hemisphere, including the United States, where 361 daily high temperatures were tied or broken in a single day, from far northern Montana to the Mexico border, through the Rocky Mountains and Northern Plains into the Midwest and even New England. Only six low temperature records were tied or broken.

All eyes watched Hurricane Laura approaching the Texas-Louisiana border with winds up to 150 mph. It was the third major hurricane to make landfall along the Gulf Coast in the last three years. As early as March and April, there were reports that the Gulf waters were record-warm. Sea level is rising faster than the global average along parts of the Gulf Coast, which also increases the threat of hurricane driven flooding, as the sea surges inland and swollen rivers discharge near the coast.

Hurricane Laura intensified rapidly from a tropical storm to a major Category 4 storm in the last 24 hours before landfall, following a “highly unusual” upward trend in rapid intensification of Atlantic hurricanes in recent decades that can only be explained by global warming as a contributing cause, according to a 2018 study led by researchers with the National Oceanic and Atmospheric Administration.

A Storm Surge Warning is in effect from San Luis Pass, Texas to the mouth of the Mississippi River. The surge could be as high as 9-13 ft above ground level along the southwestern Louisiana and far southeastern Texas coasts and could penetrate as far inland as 30 miles.

Otto, the Oxford climate researcher, said the heat ties all the extremes together, but also represents the biggest danger on its own.

“Heatwaves are not just interesting or uncomfortable, they are really dangerous, and we’re nowhere near being prepared for the heat waves in a world that has warmed by 1 degree Celsius (1.8 Fahrenheit), let alone 1.5 or 2 degrees,” she said. “Climate change is an absolute game-changer. These are events that you would expect to see frequently in the climate of 2080. And we haven’t really understood what it means to have compound extremes, like what does it mean to have extreme heat waves every summer.

Levermann, with PIK, said basic physics is the simplest way to explain how climate extremes are linked with global warming. The climate system is fueled by heat, and global warming has been cranking up the dial.

“Take a hurricane that exists now, let it take the same path over a 2-degree warmer ocean or a five degree warmer ocean and you can say what will happen, and it’s the same with extreme rainfall,” he said. “It’s a simple thread, but terribly robust. The ones that worry me are what we don’t understand yet, like winds, and also hurricanes on new paths.”