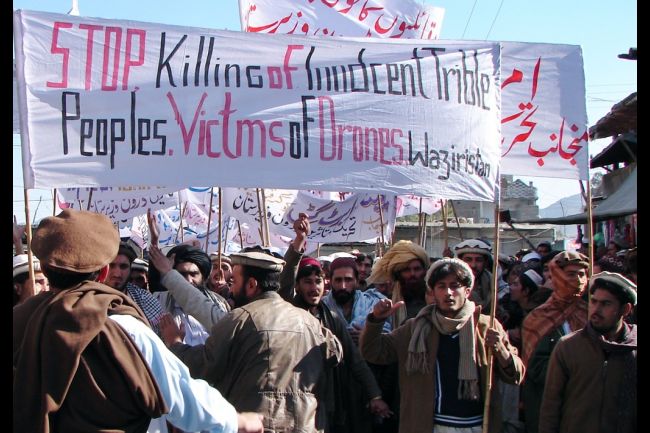 10 Ways You Can Join the Fight Against Drone Warfare

Everyone has a responsibility to seek justice for drone victims.

“Nobody has ever told me why my mother was targeted today.…All [media] reported that three, four, five militants were killed. But only one person was killed that day: Momina Bibi, a grandma, a midwife…not a militant but my mother.”

These are the words of Rafiq ur Rehman, whose 67-year-old mother was killed in Pakistan by U.S. drone in October 2012. Rehman told this story at a congressional briefing on Tuesday, accompanied by his two children, Nabila, 9, and Zubair, 13, who were injured by drones. Rehman’s other child Asma, 5, and his five nieces and nephews were also injured. The briefing, organized by Congressman Alan Grayson (D-Fla.), was the first time lawmakers heard from drone strike survivors and drone victims’ families.

“The string that holds the pearls together,” Rehman said. “That is what my mother was. She was the string that held our family together. Since her death, the string has been broken and life has not been the same. We feel alone and we feel lost.”

There is an estimate of 2,600 to 3,400 people killed by drone strikes in Pakistan, only 2 percent of whom were on the U.S. government’s high-value target list. Most of the rest go unnamed and unacknowledged by the U.S. government, though there are estimates of at least 400 to 900 confirmed civilian deaths and 200 deaths of children. The media reports that drones are constantly killing militants, mainly because President Obama redefined the term “militant” to mean every man of military age. Drone strikes have also been reported in Yemen and Somalia.

A recent Gallup poll found that a majority of Americans, 65 percent, support the use of drones. Ninety-seven percent of Pakistanis oppose drone use, while 74 percent consider the U.S. an enemy of their country. These growing numbers discredit the claim that our wars overseas are making us safer.

Stopping drone strikes will take collective action. Here are a few ways you can fight back against drone use.

There are 64 drone bases, and 22 planned bases, on American soil. Last year, Public Intelligence, a non-profit that advocates for free access to information, released a map of current and future bases. You can locate a base near you and organize a protest near the base or block its entrance to hinder operations. Activists in upstate New York have interrupted operations at the Hancock Field Air National Guard Base near Syracuse, NY several times. Last week, five members of the Upstate Coalition to Ground the Drones and End the Wars wereacquitted of disorderly conduct after blocking the gates to the base earlier this year. The activists have continued to protest the base.

Perhaps the best way to fight drone use is to stay informed and talk to others in your community about the issue. After all, a majority of Americans still support drone use. A great way to begin a dialogue is through film screenings. Robert Greenwald’s new documentary, Unmanned: America’s Drone Wars, is an excellent option. The documentary investigates the impact of U.S. drone strikes at home and abroad. Greenwald speaks with drone survivors, families of drone victims, a former drone operator, former government officials and others. Watch the trailer here. Sign up here to receive a link to the documentary for free, or visit the website for updates on the film’s screenings. Then organize a screening in your community, and make sure to plan time for discussion afterward.

On Nov. 16-17, CodePink, a grassroots organization working to end U.S.-funded wars and occupations, with host a drone summit in Washington, D.C. “Drones Around the Globe: Proliferation and Resistance” will bring together concerned citizens as well as drone survivors and families of drone victims from Pakistan and Yemen. This is a great way to get a crash course on drones and their effects. You can learn more here.

4. Protest to take drones out of the CIA’s hands.

The CIA’s covert use of drones in Pakistan, Yemen and Somalia has killed at least 3,000 people, including noncombatants, children and American citizens. Drones Watch, a campaign to monitor and regulate drone use created by CodePink, has called on Dianne Feinstein, chairperson of the U.S. Senate Select Committee on Intelligence, to take drones out of the CIA’s hands. They argue that there is already a transparency issue with drones and having these weapons used by a program designed to operate in secret is troubling. You can sign their petition here, or better yet, if you live in California, protest outside of Feinstein’s house or office. CodePink has held die-ins at both to illustrate the lives lost in drone attacks.

5. Protest your representative on the congressional Unmanned Systems Caucus.

Fifty congressmembers make up the Congressional Systems Caucus that advocates for the use of drones and other unmanned system. Members openly work with drone manufacturers on policy, which have given caucus members a total of $8 million in contributions. Find out if your representative is on the committee and demand they stop taking money from drone manufacturers as well as stop advocating for drone use.

The Association for Unmanned Vehicle Systems International is an organization working to advance the use of drones and other unmanned systems. AUVSI doubled its lobbying budget to nearly $300,000 in 2011. AUVSI holds numerous events throughout the year and across the country. Make sure to stop by and protest outside these events that attempt to mask the violence caused by drones.

Last week, two human rights groups, Amnesty International and Human Rights Watch, released reports on how drone strikes kill civilians in Pakistan and Yemen. Amnesty International’s report, “Will I Be Next? U.S. Drone Strikes in Pakistan” is based on interviews with 60 survivors and eyewitnesses to drone strikes. Human Rights Watch’s report, “Between a Drone and Al-Qaeda: The Civilian Cost of U.S. Targeted Killings in Yemen,” examines six U.S. targeted killings in Yemen. You can organize a report reading or presentation in your town. After a discussion, you can sign Amnesty’s petition urging Obama and Congress to investigate unlawful drone deaths and then think of other ways to organize.

Too often a drone victim’s life, and death, become just a number, a statistic in our fight against drone use. But it’s vital to humanize these victims and bring them to life. In attempt to reverse the “othering” of victims overseas, you can organize a storytelling session in your community. Each person signs up to research and learn about one drone victim’s life and death, and then plan a time to come together and share their stories.

Organize a book discussion in your neighborhood for readers who want to delve into the complex world of drones. Read Medea Benjamin’s Drone Warfare: Killing by Remote Control, Jeremy Scahill’s Dirty Wars: The World Is a Battlefield,or another book on the impact of drones, and then gather to discuss.

10. Organize a local ban on drones.

The Federal Aviation Administration is preparing to make U.S. skies drone-ready by September 2015. Some police forces have already announced that they will use drones for surveillance, while the U.S. is already using drones at the U.S.-Mexico border. While a local drone ban doesn’t address drone strikes overseas, it’s part of the action necessary to halt the use of drones globally. Charlottesville, VA was the first city to pass legislation against drone use. The Bill of Rights Defense Committee has drafted model legislation local activists can use in their fight. The Rutherford Institute, a civil liberties organization that provides free legal services to people whose constitutional rights have been violated, has draftedmodel legislation as well. Organize a local ban on drones in your community or state.