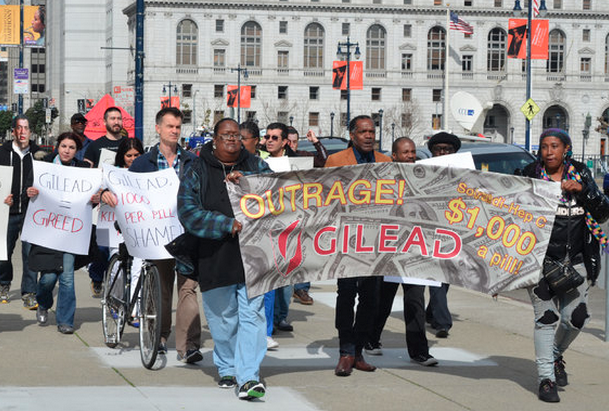 The pressure is mounting on pharmaceutical companies to lower their prices for lifesaving drugs, as a group of more than 100 prominent oncologists is calling for grassroots solutions to the skyrocketing cost of cancer treatment.

In an editorial published on Thursday in the journal Mayo Clinic Proceedings, 118 doctors from top hospitals around the country argue that up to 20 percent of cancer patients don’t follow their recommended treatment regimen because they’re being priced out of the drugs they need. The oncologists say this financial burden puts sick Americans in an untenable situation as they’re fighting for their lives.

“It’s time for patients and their physicians to call for change,” Dr. Ayalew Tefferi, a doctor at the Mayo Clinic and the lead author of the paper, concluded.

In the editorial, Tefferi and his colleagues call for several policy changes to help address the problem. They say the United States should establish a new regulatory body to help set drug prices after new medications are approved for the market, as well as allow cheaper drugs to be imported from other countries like Canada. They also recommend allowing Medicare to negotiate directly with pharmaceutical companies, which could help the government program use its bargaining power to demand lower prices.

According to a poll released last week from the Kaiser Family Foundation, the majority of Americans agree that Medicare should have the power to help negotiate down drug prices. This particular reform has encountered political resistance because of concerns over government interference in the private marketplace. Eighty-seven percent of participants in Kaiser’s survey, however, said they want Medicare to pressure Big Pharma for discounts on costly drugs.

“People don’t understand why these drugs cost so much, and they don’t understand why, in America, you can’t negotiate for a better price,” Mollyann Brodie, the executive director of public opinion and survey research at the foundation, told Reuters.

Indeed, as the monthly cost of cancer drugs in the U.S. has nearly doubled over the past decade, the oncologists’ editorial is just the latest call to arms in a growing movement to resist the pharmaceutical industry’s skyrocketing drug prices.

At the beginning of the summer, during a large medical research conference, a prominent oncologist at Memorial Sloan Kettering Cancer Center gave a blistering speech about the rising cost of cancer treatment, arguing that the drugs are priced based on how Big Pharma can make a profit rather than on the true value of the medication.

“These drugs cost too much,” Dr. Leonard Saltz said during that speech, in what represented an unusually frank indictment of drug companies at a conference devoted to research and innovation that’s typically sponsored by the industry.

Medical professionals have been frustrated about this dynamic for years, particularly as national controversy swirls around innovative new drugs that show promise in treating chronic conditions yet are priced as high as $1,000 dollars per pill. In 2013, a similar editorial penned by a different group of doctors who specialize in leukemia suggested that the rising drug prices may actually violate the Hippocratic Oath’s requirement to “do no harm” to patients.

Some segments of the American public share that view. An online petition calling on the Department of Health and Human Services to ensure that all cancer patients have “affordable drugs to save their lives” has garnered more than 6,000 signatures so far.

Though pharmaceutical giants typically say they have to set their prices high in order to offset the costs of bringing new drugs to the market — a lengthy process that requires a lot of upfront investment — a growing number of lawmakers are becoming skeptical. As the New York Times reports, at least six state legislatures have recently introduced so-called “pharmaceutical cost transparency” bills that, if passed, would require Big Pharma to explain exactly how they arrived at the price tag for their medications. Even some GOP lawmakers, who typically oppose efforts to regulate the free market, are starting to question why these drugs need to be quite so expensive.