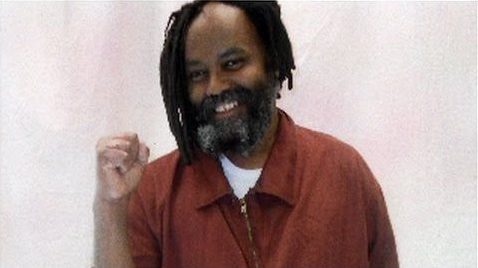 Above and below: Mumia Abu-Jamal with fist raised from PrisonRadio.org. 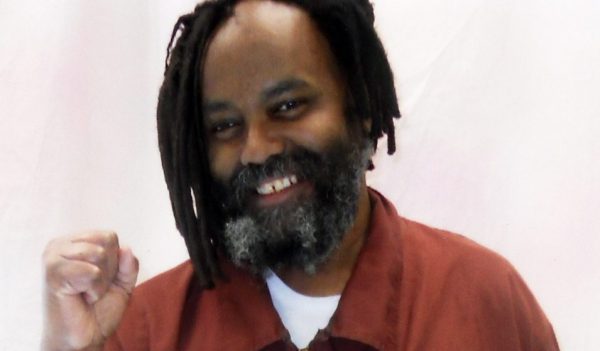 A stunning turn of events has hope for Mumia’s freedom rising.

Shortly after the discovery of six previously unreleased boxes (from Mumia’s original 1982 trial), the District Attorney has revealed that the storage unit contained an additional 100+ boxes.  These boxes have not yet been inventoried and could contain key evidence in many other cases.

Mumia’s attorneys have access to the first set of six boxes, but there has been no report, yet, on what evidence has been found and whether it can be used to argue for a new trial.

At the same time, the District Attorney was informing the court of this serious prosecutorial misconduct, they also filed a notice to appeal Judge Leon Tucker’s late December order reinstating Mumia’s direct appeals before the PA Supreme Court.

Remember, this order was the very first time in 37 years that a Philadelphia judge had granted Mumia relief.  The order DA Larry Krasner is trying to block, is literally a path to freedom that would allow Mumia to reopen his direct state appeals.  Krasner’s reason: This ruling opens the door for relief- not just for Mumia but hundreds of others.  To quote their press statement of 1-30-19. There will be “sweeping and, in our view, problematic, implications for a large volume of cases” if relief is granted for Mumia Abu-Jamal.

You heard that right.  If Tucker’s ruling that Castille was fundamentally biased in violation of the PA Judicial Canons is upheld, then, hundreds of others similarly victimized by PA Supreme Court Justice Ronald Castille could get relief. Ok, so why is Krasner appealing?  Justice requires that the status quo is rocked. And guess what Larry- Castille is part of the problem. You may have cozied up to him, and put him on your transition advisory board, but Lord have mercy he is part of the problem.

This follows in the wake of the U.S. Supreme Court condemnation of Castille and the PA Court system for a fundamental violation of defendant’s due process rights. Ron Castille was determined in all of his cases to be the prosecutor, the judge, and then if allowed the executioner. His exact words, which are echoed throughout the Pennsylvania judiciary were “I know I could be fair”.

Now, why is Mumia’s case so important? “Philadelphia is up south”. It is ground zero for over incarceration and injustice.  In Philadelphia Mumia Abu-Jamal’s case is the proverbial “3rd rail.”  If he gets relief- it is a whole new ballgame.  Power will have fundamentally shifted. Securing his freedom will take revealing and exposing decades of police, prosecutorial, and judicial corruption.

That is exactly what is at stake.   Here is the current context:

Larry Krasner, a civil rights attorney, a big “L” liberal, was popularly elected the District Attorney in a landslide, and took office in early 2018. His mandate: change the culture of injustice in Philadelphia.

The Philadelphia Police force, 6600 members strong, have grown fat on decades of brutality and corruption.  This is still Frank Rizzo’s department. Day in and day out, scandal after scandal, appears on the front pages of the Philadelphia newspapers. It is a predominantly white police force as occupying army. The Fraternal Order of Police Lodge Five see every reform, every plea for justice, as threatening the core of their “business as usual.” John McNesby President of Lodge Five would be a laughable character- if he wasn’t so brutally dangerous.  See today paper for instance!

Frankly, the Common Pleas Court Judges are no different.   While fewer in number and of a different class, they are also desperate to maintain “business as usual” at the Juanita Kidd Criminal Justice Center.  They are completely “comfortable” with the system designed to use poor bodies as fuel.  It is shocking how judges and lawyers in that building justify this deeply disturbing system of grinding punishment that is routinely rocked by police and prosecutorial scandals.  Did it really take Meek Mill’s victimization for the world to see what it is like on the ground in Philadelphia?  And have you noticed that nothing has changed, Meek is still chained to probation system.

“It is especially important for those who have offered critical support of Krasner and positive changes he has made to speak out against this. We cannot be silent when a self-styled “progressive” sides with the reactionary and racist Fraternal Order of Police to continue an ignoble and corrupt frame-up. That his office has implemented many positive changes makes it all the more important that he hears loud and clear that this maneuver is unacceptable. Free Mumia. This is not over by a long shot. It will not be until he is free.” Abolitionist Law Center Attorney, Bret Grote.

If you want to raise your voice, email DA Krasner at justice@phila.gov