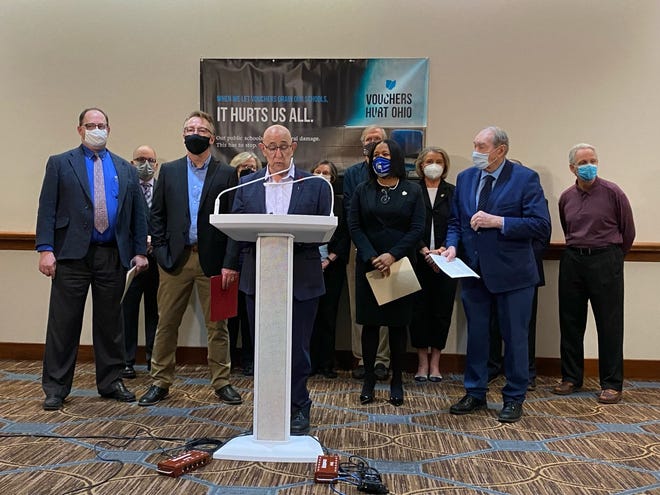 Above Photo: Eric Brown, a school board member for Columbus City Schools, announces a historic lawsuit challenging the constitutionality of Ohio’s EdChoice scholarship programs on January 4, 2022.

On Tuesday, 100 Ohio public school districts and the Ohio Coalition for Equity and Adequacy of School Funding filed a lawsuit challenging the legality of Ohio’s EdChoice Scholarship Program under the provisions of the Ohio Constitution. EdChoice is Ohio’s rapidly growing, publicly funded school voucher program.

The Cleveland Plain Dealer‘s Laura Hancock reported: “A coalition of 100 school districts sued Ohio over private school vouchers Tuesday, saying that the hundreds of millions of public dollars funneled away from public schools have created an educational system that’s unconstitutional.”

In their lawsuit, plaintiffs declare: “The EdChoice Scholarship Program poses an existential threat to Ohio’s public school system. Not only does this voucher program unconstitutionally usurp Ohio’s public tax dollars to subsidize private school tuitions, it does so by depleting Ohio’s foundation funding—the pool of money out of which the state funds Ohio’s public schools… The discrepancy in per pupil foundation funding is so great that some districts’ private school pupils receive, as a group, more in funding via EdChoice Vouchers than Ohio allocates in foundation funding for the entire public school districts where those students reside. This voucher program effectively cripples the public school districts’ resources, creates an ‘uncommon’, or private system of schools unconstitutionally funded by taxpayers, siphons hundreds of millions of dollars of taxpayer funds into private (and mostly religious) institutions, and discriminates against minority students by increasing segregation in Ohio’s public schools. Because private schools receiving EdChoice funding are not subject to Ohio’s Sunshine Laws or most other regulations applicable to public schools, these private facilities operate with impunity, exempt from public scrutiny despite the public funding that sustains them.”

The new lawsuit charges that the Fair School Funding Plan had been formulated to address inadequate state funding of public schools over recent years: “Over the last decade, the formulas implemented by the General Assembly for funding Ohio’s public schools reflected the amount the General Assembly was willing to spend on public education, rather than the realistic cost of providing a thorough and efficient education to all of Ohio’s students. Due to budget freezes or minimal increases over the last decade, state funding to Ohio’s public school districts has not even kept pace with inflation since Fiscal Year 2011. Additionally, because the funding formula was frozen in Fiscal Year 2020-21 at the 2019 level, but vouchers and “community schools” (which is what Ohio calls charter schools) were funded by way of deductions from total school funding,  affected public school districts lost approximately $193 million in state funding during these formula freezes. In contrast, the per pupil EdChoice Program Voucher payments rose by 15% for a grade 1-8 voucher and by 25% for a grade 9-12 voucher for Fiscal Year 2022 alone.”

The lawsuit delineates the losses in public school funding for one of the plaintiff districts: “The Cleveland Heights-University Heights City School District, for example, is expected to receive from the state of Ohio a total of approximately $5.6 million in foundation funding for Fiscal Year 2022 to educate the 5,000 students who attend its schools. The state of Ohio, however, will pay out over $11 million for private school tuition to the approximately 1,800 EdChoice Voucher recipients residing within the Cleveland Heights-University Heights City School District in Fiscal Year 2022. In other words, approximately twice as much public funding will be paid in Fiscal Year 2022 for private school tuition for CH-UH residents as the foundation funding allotted to the entire student body of the Cleveland Heights-University Heights District.”

At the press conference where the lawsuit was announced, a member of the Richmond Heights Local School Board of Education, Nneka Jackson addressed the third count, that EdChoice Vouchers have illegally exacerbated racial segregation in Ohio’s public schools: “If someone tells you this is about helping poor minority children, hook them up to a lie detector test ASAP and stand back because the sparks are going to fly… About 40 percent of Richmond Heights residents are white. Before the EdChoice private school voucher program, about 26 percent of the students in the Richmond Heights School District were white and 74 percent were students of color. Today, after EDChoice, Richmond Heights is three percent white and 97 percent students of color. Private schools are allowed to discriminate, plain and simple, based on disability, disciplinary records, academic standing, religion and financial status. These are often proxies for race and other protected characteristics. Ohio is essentially engaged in state-sponsored discrimination in admissions and retention. You know who can’t do this? Public schools. Common schools.”