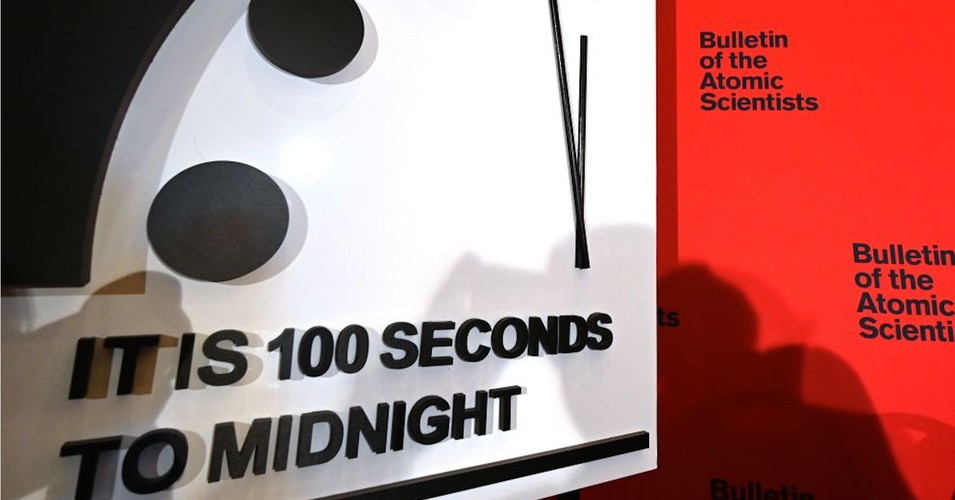 Above photo: The Bulletin of the Atomic Scientists’ “Doomsday Clock”—an estimate of how close humanity is to the apocalypse—remains at 100 seconds to zero for 2021. Eva Hambach/AFP via Getty Images.

Doomsday Clock Reveals Humanity Closer Than Ever to the Apocalypse.

Citizens must “demand… that their governments reorder their priorities and cooperate… to reduce the risk of nuclear war, climate change, and other global disasters, including pandemic disease.”

One hundred seconds to midnight. That’s how close humanity is to the apocalypse, and it’s as close as the world has ever been, according to Wednesday’s annual announcement from the Bulletin of the Atomic Scientists, a group that has been running its “Doomsday Clock” since the early years of the nuclear age in 1947.

Although the scientists cite the Covid-19 pandemic, which has killed 1.7 million people around the world and has “revealed just how unprepared and unwilling countries and the international system are to handle global emergencies properly,” they acknowledge that the coronavirus does not pose an existential threat to Homo sapiens.

Nuclear risk is rising as arms control treaties wither and die. Here’s the world of nuclear arms, in one graphic. Visit our site to see the @pentagram data visualization. #DoomsdayClock https://t.co/V5ojW8ROFE pic.twitter.com/4oaMO9AwfO

“Accelerating nuclear programs in multiple countries moved the world into less stable and manageable territory last year,” the scientists say. “Development of hypersonic glide vehicles, ballistic missile defenses, and weapons-delivery systems that can flexibly use conventional or nuclear warheads may raise the probability of miscalculation in times of tension.”

“Events like the deadly assault earlier this month on the U.S. Capitol renewed legitimate concerns about national leaders who have sole control of the use of nuclear weapons,” they say. “Nuclear nations, however, have ignored or undermined practical and available diplomatic and security tools for managing nuclear risks.”

“By our estimation, the potential for the world to stumble into nuclear war—an ever-present danger over the last 75 years—increased in 2020,” they conclude.

🚨The @BulletinAtomic just updated the Doomsday Clock, and we are PERILOUSLY close to midnight.

May this be a wakeup call to our leaders: We must fully denuclearize our world. The risk is simply too great.

Thirty years ago, by contrast, the Bulletin of the Atomic Scientists set the Doomsday Clock to 17 minutes to midnight as the Soviet Union collapsed and the threat of thermonuclear annihilation ebbed to its lowest level since before the United States invented the atomic bomb and waged the only nuclear war in history against Japan in 1945. That was the year that Albert Einstein—who helped develop the first nuclear weapons—and other researchers formed the Bulletin.

Once again this year, the scientists stress that governments have also “failed to sufficiently address climate change,” and although “a pandemic-related economic slowdown temporarily reduced the carbon dioxide emissions that cause global warming,” much more needs to be done to rein in planetary warming.

“Over the coming decade fossil fuel use needs to decline precipitously if the worst effects of climate change are to be avoided,” they state. “Instead, fossil fuel development and production are projected to increase. Atmospheric greenhouse gas concentrations hit a record high in 2020, one of the two warmest years on record.”

“The massive wildfires and catastrophic cyclones of 2020 are illustrations of the major devastation that will only increase if governments do not significantly and quickly amplify their efforts to bring greenhouse gas emissions essentially to zero,” they warn.

Governments around the world failed to take sufficient action to address the carbon dioxide emissions that cause climate change. See @pentagram’s data visualize on our website about the warming of our environment. https://t.co/V5ojW99q4e#DoomsdayClock pic.twitter.com/m3kduARPU8

Another warning came in the form of the scientists’ condemnation of what they call the “threat multiplier” of “false and misleading information,” both online and in more traditional media.

“This wanton disregard for science and the large-scale embrace of conspiratorial nonsense—often driven by political figures and partisan media—undermined the ability of responsible national and global leaders to protect the security of their citizens,” the scientists posit. “False conspiracy theories about a ‘stolen’ presidential election led to rioting that resulted in the death of five people and the first hostile occupation of the U.S. Capitol since 1814.”

The COVID-19 pandemic has spawned what the @WHO has called an “infodemic” of mis- & disinformation. Here, the designers from @pentagram illustrate the dysfunction. See the full
graphic here: https://t.co/V5ojW99q4e#DoomsdayClock pic.twitter.com/cZD9keZtL4

However, this year’s report is not all gloom and doom.

“The election of a U.S. president who acknowledges climate change as a profound threat and supports international cooperation and science-based policy puts the world on a better footing to address global problems,” the scientists assert. “For example, the United States has already announced it is rejoining the Paris Agreement on climate change and the Biden administration has offered to extend the New START arms control agreement with Russia for five years.”

“In the context of a post-pandemic return to relative stability, more such demonstrations of renewed interest in and respect for science and multilateral cooperation could create the basis for a safer and saner world,” they write.

“We continue to believe that human beings can manage the dangers posed by modern technology, even in times of crisis,” the researchers conclude. “But if humanity is to avoid an existential catastrophe—one that would dwarf anything it has yet seen—national leaders must do a far better job of countering disinformation, heeding science, and cooperating to diminish global risks.”

Ultimately, the scientists say, it’s up to “citizens around the world” to “organize and demand—through public protests, at ballot boxes, and in other creative ways—that their governments reorder their priorities and cooperate domestically and internationally to reduce the risk of nuclear war, climate change, and other global disasters, including pandemic disease.”