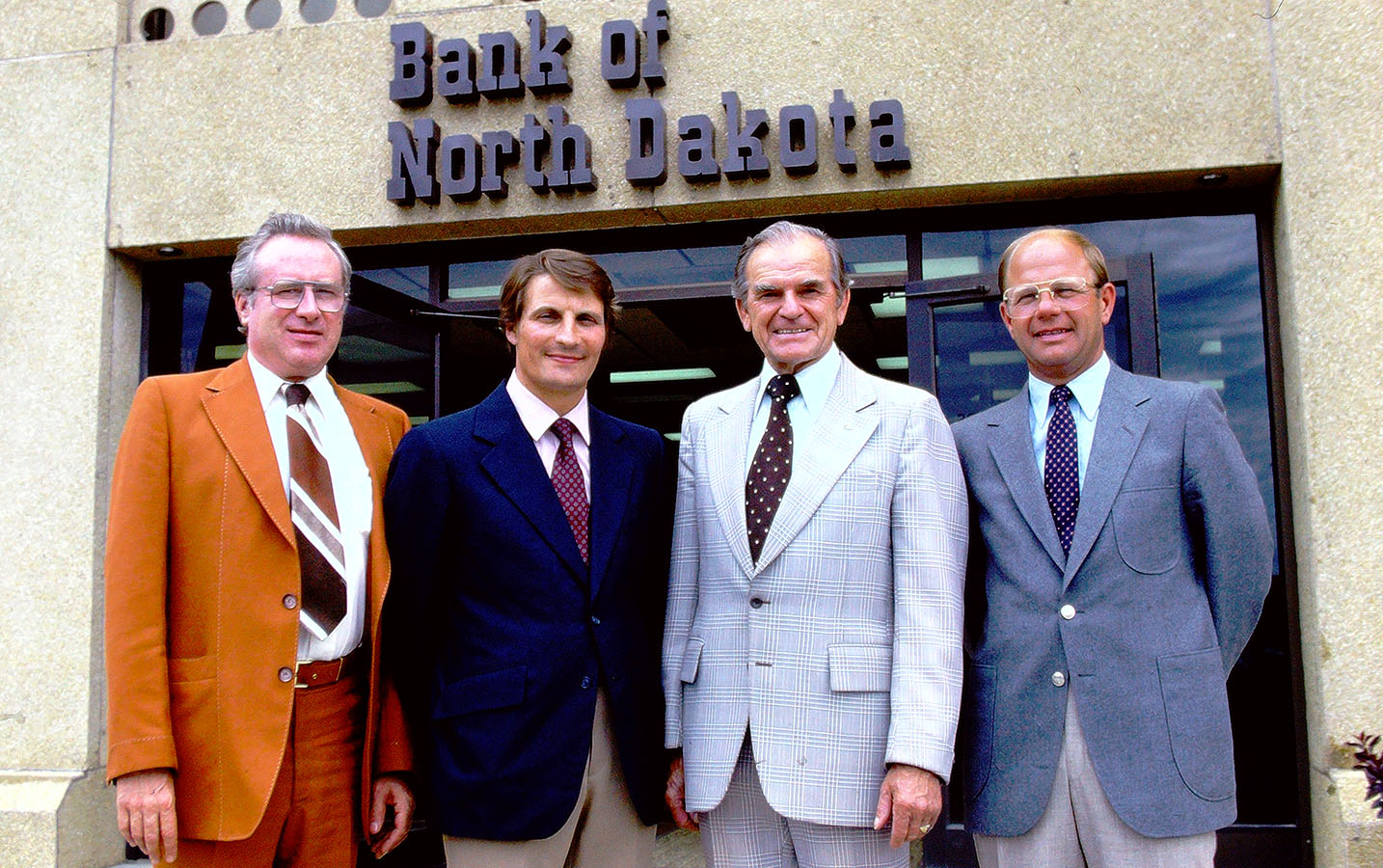 On Thursday, April 5, 1951, the Amerada Petroleum Company of Tulsa, Oklahoma completed a 17-hour test of an oil well on the Clarence Iverson farm near Tioga, North Dakota. The well produced 307 barrels of 44 gravity oil and around 5 million cubic feet of gas. The company described the find as ‘commercial.’

After the Depression, the Bank of North Dakota worked hard to divest itself of the farm lands it had acquired through foreclosure during the crisis of the Depression and Dust Bowl. By 1950, only a few dozen of the 6,360 farms the Bank held title to in 1940 were still in its delinquent portfolio.

The 1939 Legislature voted to keep 5 percent of the mineral rights on the foreclosed land upon sale and increased it to 50 percent four years later. By keeping this significant percentage of the mineral rights on the lands it had acquired during the desperate years, however, the Bank laid the foundation for decades of more ample revenues during the second half of the 20th Century, when oil became a significant source of North Dakota economic activity.

The Bank held a mineral rights auction for land in Tioga in its lobby August 8, 1951. The rights sold for $28 per acre.

During the 1950s, the national conservative backlash against Franklin D. Roosevelt’s New Deal achieved virulent proportions. This was the era of Joseph McCarthy, the House Un-American Activities Committee, “communist infiltration,” and the real or perceived theft of America’s nuclear secrets. Anything savoring the aroma of socialism or social engineering was suspect during this period of American history. There was a national attempt to dissolve Indian reservations, undo Social Security, and roll back every remaining New Deal program.

Bizarrely, A.C. Townley, the populist firebrand who had created the Nonpartisan League in 1915 and presided over it during its headiest years, now rebooted himself as a snarling anti-Communist stump speaker. The managers of the Bank of North Dakota wisely kept their heads down, went about their business in the least-controversial manner, and avoided publicity during this period of reaction. Their goal was survival.

The years from 1945 to 1960 were “an exceptionally quiet time for the Bank,” according to Rozanne Enerson Junker, the author of a history of the Bank published in 1989. After the crisis of the Great Depression, exacerbated by the extra-constitutional efforts by Governor William L. Langer to hold the state together through its greatest crisis, the leaders and people of North Dakota “were content to run the Bank primarily as a depository of the state’s funds.”

Through the first hundred years of the Bank’s existence, a fascinating pattern developed. The Bank raised its profile and took significant risks to help North Dakota through difficult times, then slipped below the radar when conditions improved, both because its job was temporarily done and to avoid calling undo attention to itself. Periods of progressivism tended to alternate with periods of retrenchment and retraction. After periods of intense activity, the Bank tended to embrace the least “exposed” and controversial profile, quietly doing its core work and accumulating capital and credibility, until the next time it was needed to prop up the state.

The Bank’s second transfer of funds to the general fund was made in 1951. In 1953, the Bank supplied $9.6 million to match federal highway funds. This was the first occasion when funds from loan collections were transferred to the state’s general fund, rather than earnings (such as mineral revenues) unrelated to the Bank’s loan portfolio. Thanks to these precedents, during economically difficult times in North Dakota, the Bank was increasingly called upon to make transfers to meet budget shortfalls.

Under Bill Guy’s leadership (via then Bank president Herb Thorndal), the Bank ceased to buy bonds from political subdivisions. Cautiously, the Bank began to make farm loans again after a 28-year hiatus. The mostly-Republican state Legislature fought this initiative, remembering the chaos of delinquent loans and foreclosures of the 1930s. Nevertheless, in 1961 the Industrial Commission directed the Bank to set aside $500,000 for loans guaranteed by the Farmers Home Administration (FmHA). Over time this enabled the Bank to cover the backlog of loans that the federal FmHA had approved in the state. Governor Guy also wanted to create a loan program for beginning farmers. His program would have guaranteed up to 50 percent of these loans. The Legislature rejected the idea on a party line vote.

For the most part, Guy’s call for the Bank to help expand the state’s economy were never implemented because he did not have the support from the other two Industrial Commission members who were from the opposing party. It did plant the seed for the Bank’s potential to impact the lives of North Dakotans.

Tough economic times in the 1980s set the stage for the Bank to embark on its economic development mission.

Governor Sinner took office in 1985 and insisted that the Bank of North Dakota should be engaged in community development. He wanted the Bank to be more than a lending institution. At a difficult time in North Dakota history, the collapse of the late 70s oil boom and a prolonged drought, Sinner wanted the Bank to play a role in the regeneration of rural life. This put him squarely in the tradition of the Bank’s origins and founding mission.

Bank President Joe Lamb determined to set aside a portion of Bank profits to fund specific community development programs. One of these was called PACE (Partnership in Assisting Community Expansion.) The state of North Dakota appropriated $2.7 million to fund small town investments. The Bank worked with local commercial lenders to keep investment loan interest rates low. The PACE program was popular in North Dakota, and it was regarded as a successful public-private partnership for the Bank.

Over the years, other PACE programs have been added to stimulate economic development.

Although a modest program of student loans had been created in the 1940s by Langer’s Bank Manager Frank Vogel, the Bank of North Dakota became involved in student loans in a significant way beginning in 1967.

Bank employee Martin “Buck” Stenehjem managed the program. The Bank made its first direct student loan to Grady Porter, a student at Bismarck Junior College who then completed a bachelor’s degree at Valley City State College. This was the first federally insured student loan in the United States!

The Bank ran a highly-successful student loan program for federal loans until 2010 when the federal government decided to centralize the program. Today, the Bank administers its own state-sponsored student loan program which started in 1997 and fills gaps for thousands of students when federal funding, grants, scholarships and savings aren’t enough to pay for their education.

College SAVE, the state’s 529 program, is administered by Bank of North Dakota and encourages its citizens to start saving for college early by incentivizing with two match programs: the New Baby Match and the BND Match.

At the end of Bill Guy’s tenure as Governor in 1973, during one of the most hotly contested US Senate races in North Dakota history, Republicans orchestrated an attack on the Bank. They demanded that the new Governor Art Link fire Bank President H.L. Thorndal. They pointed to allegations of kickback schemes, misappropriation of public funds, the loss of $22,000 to a con artist, and other signs of inadequate management. Although the Bank was making a profit and was generally well-managed, there was a kernel of truth in some of these allegations. In November 1972, Bill Guy lost his Senate race (to incumbent Milton R. Young) by merely 186 votes. Historians continue to debate whether the Bank “scandal” played a role in Bill Guy’s defeat.

In 1975, the North Dakota Legislature created a committee to look into the Bank’s operations and management. It was the first investigation of the Bank since 1921, when political enemies of the Nonpartisan League used a legislative investigation to build a case to recall the Industrial Commission and close the Bank. In the monthlong 1975 investigation, 27 witnesses were called in 13 hearings. The result was a wide-ranging series of administration and policy changes at the Bank, all designed to protect the institution from embezzlement and political embarrassment. Lending procedures were tightened. Now individual Bank personnel were subject to limits on the value of loans they could authorize. Businesses with which the Bank had financial dealings were vetted for soundness and legitimacy. Access to the computer room was restricted.

The Bank of North Dakota seized an opportunity to redeem itself in the eyes of residents when the Pioneer State Bank of Towner, ND, failed in 1975. BND stepped in boldly to limit the economic damage to the community. It opened a paying and receiving station in Towner, serviced 121 accounts, and handled $50,000 of transactions per day (on average) until the crisis abated. President Thorndal proudly declared, “The Bank of North Dakota’s involvement in the Towner Community added stability to the area in a time of need. It showed that the State of North Dakota cared and was concerned about the community’s crisis.” This incident served to remind the people of North Dakota why they had a state bank, that a state-owned bank could provide services that would be impossible or unthinkable among commercial lenders.

In 1986, the Industrial Commission and the State Bank were embroiled (and embarrassed) in the infamous “Honduran potato deal.” The idea was to ship four million pounds of ND seed potatoes to Honduras, part of H.L. Thorndal’s quest to find foreign markets for North Dakota commodities. The Bank’s role was to issue $1.85 million in promissory notes to facilitate the deal.

Unfortunately, the nation of Honduras had no money with which to buy the potatoes, and the promoter of the scheme, Canadian broker William Messner, proved to be a colorful but insolvent con man. Messner arranged for ND Agriculture Commissioner Kent Jones and others to visit Honduras, where they were feted and whisked about in motorcades to their meetings with the country’s top political leaders. The whole deal proved to be a house of cards, and North Dakota’s Attorney General Nick Spaeth, elected in 1988, ruled that North Dakota wasn’t liable for the note.

Eventually, Messner pleaded guilty to federal bribery charges. He died in 1988. Jones and Thorndal were cleared of legal wrongdoing, but a subordinate in the Agriculture Department pled guilty to accepting compensation for a government transaction.

The whole unsavory business made the State of North Dakota and its “socialist” Bank look like rubes–so desperate for new commodity markets that it would fall for what appears to be an obvious con job. This may be so, but the incident has to be understood as another indicator of North Dakota’s historic “colonial” status.

From its inception, the Bank was intended to help diversify North Dakota’s narrow agricultural economy. In the early years, the Nonpartisan League attempted to create successful investments in an Alaska fishery, a Florida sisal company, and a chain of cooperative general stores in North Dakota. All of these enterprises failed, at a significant cost to the credibility of the League and its state institutions.

The 1980s Honduras potato scam represented yet another attempt by North Dakota’s Industrial Commission and the Bank to improve the economy of a state that still depended, five decades after the adoption of the Nonpartisan League program, on uncertain markets and raw commodity sales. If the Honduras scheme had worked, the Bank and the Industrial Commission would have won accolades from the Legislature and the people of North Dakota.

Read about the bank managers during this time period here.