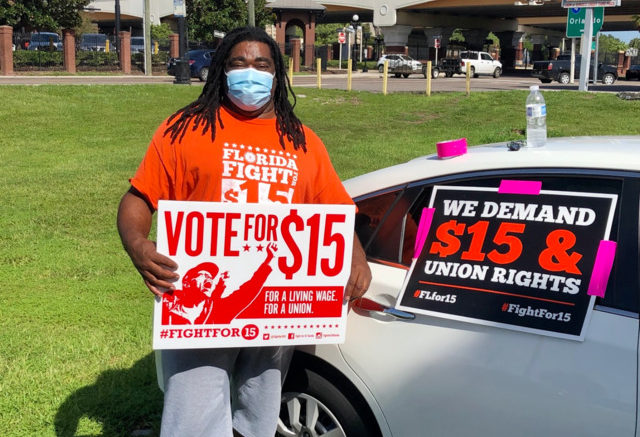 We wanted to send a quick update to report that Payday’s Strike Tracker has now recorded more than 1,000 strikes across the U.S. since March 1.

Earlier this week we surpassed the 1,000-strike count after a series of fast-food worker strikes hit both Tampa and LA.

(For more on this strike wave, see our long-form “How Black & Brown Workers Are Redefining Strikes in the Digital COVID Age.”)

In Tampa, pro-worker forces attempted to raise support for Amendment 2, which would raise Florida’s minimum wage to $15 an hour by 2026.

“No essential worker should be making poverty wages, plain and simple,”  striking worker 60-year-old Black McDonalds worker Gail Rogers said in a press release. “On just $9.60 an hour, nearly every dollar I make goes straight to my rent, leaving just pennies for doctors’ bills and other needs. I’m not alone in my struggles and that’s why essential workers throughout Florida are coming together to make our voices heard this November for economic and racial justice, and for $15 an hour.”

For more, check out CL Tampa

Just 13% of Black people out of work from April to June received unemployment benefits, compared with 24% of White workers, 22% of Hispanic workers and 18% of workers of other races, according to an analysis completed by Nyanya Browne and William Spriggs of Howard University using national survey data from the National Opinion Research Center at the University of Chicago.

Spriggs, who is also chief economist to the AFL-CIO, tells CNBC Make It the racial benefits gap has persisted over time but appears to be worse during the current economic downturn. After the 2008 financial crisis, for example, 24% of jobless Black workers received unemployment compared with 33% of jobless White workers, according to a 2012 study of national claims data by the Urban Institute.

For more, head to CNBC.

At the Louisville-Courier Journal, reporters produced an interactive piece on the 100 days of straight protest over the police killing of Breonna Taylor, including a timeline spelling out in detail what occurred:

The protesters always know what day it is.

Not the day of the week — those blend together — but the number of days it has been since May 28, when the Breonna Taylor protests began in Louisville. They say it aloud each night at Sixth and Jefferson, the de facto protest headquarters, as a rallying cry and motivating sentiment.

Today, Sept. 4, marks the 100th day of protests in Louisville.

For the full story with slideshows, head to the Louisville Courier-Journal.

Pregnancy is no easy feat, but as Prism’s Tina Vasquez reports, undocumented pregnant mothers have had it especially rough. Thankfully, community health care workers have served as a critical lifeline:

In New Jersey’s immigrant community, doula Teresita Carrasquillo is considered a godsend. Families call her at all hours—pregnant people have questions about something they learned in their childbirth education class; new mothers want additional tips on breastfeeding or help getting diapers; and women who gave birth months prior just want to remain connected. Carrasquillo becomes a friend and confidant to undocumented women navigating one of life’s biggest transitions in a country that is increasingly hostile to immigrants. But as the COVID-19 pandemic continues to ravage Latinx communities, trained community health workers like Carrasquillo have also become lifelines.

Read the full story at Prism.