1,000 Take NYC Streets And Trains In Outrage Over Police Attacks On Teens

Above Photo: From Liberation photo.

Normally a bustling spot for engineering students, white-collar and blue-collar workers alike, Brooklyn New York’s Metrotech Commons became a 1,000+ strong sea of concerned working class warriors on Nov. 1. “Poverty is not a crime,” “No cops in the MTA,” “Make the MTA free” was shouted by the multiracial, intergenerational, and militant crowd. They carried signs that read, “No new police,” “NYPD off our trains, “Don’t let the police touch us.”

The cops were out in full force, but “the people were angry and unafraid,” observed Party for Socialism and Liberation member Joel Northam from Brooklyn.

The FTP Emergency Action Against the City of New York Police Department and the Metropolitan Transportation Authority ― organized by Decolonize this Place, No New Jails, and other groups, was a response to increased police violence against youth of color in the subways.

Police violence on mass transit on the rise

In the past week, there had been three such incidents. On Oct. 25, the NYPD responded to an incident involving two groups of teens at the Jay Street-Metrotech train station in Brooklyn, the site of the protest. They assaulted several of the teens, including a 15-year-old who they forcefully punched in the face and body-slammed to the floor.

On Oct. 28, when a 16-year-old hopped a subway turnstile in Corona, Queens, the NYPD pinned the teen to the floor and tased him when he was restrained. A march of hundreds in Queens protesting this assault took place at the same time as the Brooklyn action.

Especially outrageous was an incident in Brooklyn on Oct. 25 when officers responded to a 19-year-old young man who didn’t pay the $2.75 subway fare. Operating under a woefully false witness statement that the young man possessed a firearm, several officers stormed the passenger-filled car with guns drawn and trained on their target, who had his hands up in a surrendering position the entire time. With the people adequately terrorized, and no gun on the teen’s person, the NYPD wrote him a ticket for “theft of services.”

The city expects mass transit riders to pay $2.75 for each trip on a system where the trains are reliably unreliable, the buses are either congested or non-existent, and the ceilings drip odd goop and sometimes even fall on passangers’ heads. Rather than investing the much-needed funding into reversing this massive failure, New York Governor Cuomo has committed millions in funding to hire 500 new transit cops specifically to target “fare beaters,” namely oppressed youth who are just too poor to pay the fare! The terror inflicted upon NYC workers is now two-pronged, with both NYPD and MTA cops criminalizing poverty and threatening the ways in which these young people are forced to navigate in a hostile world.

March provides its own security

This is why angry protesters took the streets,  and faced off against police. Several hundred jumped turnstiles at the Hoyt-Schermerhorn station and occupied the subway platform there, chanting and educating subway riders.

While chanting against the terrorist police and the state they uphold, the people had each others’ backs. Older, more-seasoned activists navigated the crowd and ran security, offering jail-support services for any of the protesters who got into trouble. In the PSL contingent, you could hear comrades checking in on each other and see heads turn left, right, forward, and back to get a head count and make sure all were safe and in formation.

The NYPD will likely try to tout that their officers’ restraint accounts for the very low arrest-count that night— two. But it was the discipline of working class activists that kept the arrests down, keeping each other safe.

In stark contrast to the uplifting energy of the protesters was the oppressive role of the police units dispatched to the scene. Protesters were on the run from police for much of the march, rushing to close gaps in the formations before the police could split the group into more easily harrassable― and arrestable― fragments.

Towards the front, rear, and side of the march were officers with their hands itching dangerously close to their tasers, batons, and firearms. But videos circulating on social media reveal NYPD Legal Bureau officers frantically running across the front lines to pull officers back and remind them not to brutalize the protesters. According to Northam, “The NYPD really didn’t want smoke. Given the image they’ve been trying to cultivate as of late, and they didn’t want to encourage a major confrontation near one of the most profitable sections of Brooklyn for businesses, near the Barclays Center.”

Though inter-generational, the march was overwhelmingly young, with many high school and college students pumping their fists in the air and shouting chants. The presence of students from the city’s public university, CUNY, was notable. Briana Calderon-Navarro, who organizes within the Free CUNY! movement, said, “Students should be fighting the fare-evasion crackdown because it is criminalizing poverty. We are witnessing gangs of police officers threatening low-income people of color, the youth, and those that identify with the LGBTQ community. The groups being targeted in the MTA reflect the identities of many students at CUNY.” 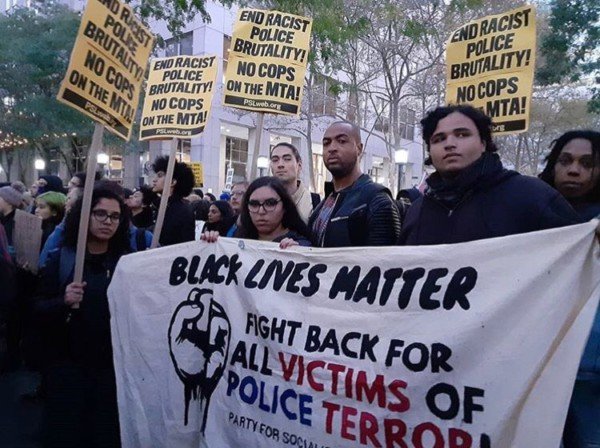 She continued, “A few hours ago, I witnessed two male police officers corner a small teenage girl. They pinned her against the wall of the 68 St. train station and handcuffed her for jumping the turnstile. She was visibly terrified, crying, and trying to alert bystanders that she was alone and a minor. I pulled out my phone and started recording, and, eventually, the officers took the handcuffs off her and gave her a $100 fine. Then, the cops kicked her out of the station, so I walked with her to the next stop so I could swipe her in. We talked about what had happened as we walked along Lexington Avenue. She has a student metrocard  [fare card] that she uses to go to high school, but it doesn’t work on the weekends when she needs it to commute to work. We agreed that people need to look out for each other, because the city sure as hell won’t.”

The PSL distributed hundreds of fliers in both English and Spanish explaining that decaying public infrastructure, police violence, poverty and racism are inherent in the capitalist system. While fighting for a better life right now, PSL encouraged those present to join the movement to fight for socialism. Their flyer pointed out that under a revolutionary working-class leadership, public transit will be free, society would value Black, Latino, Indigenous, LGBTQ and working class lives; housing, jobs, healthcare, education, and food would be both adequate and guaranteed. This view resonated so strongly with people present that distributors ran out of their 300 fliers within 20 minutes.