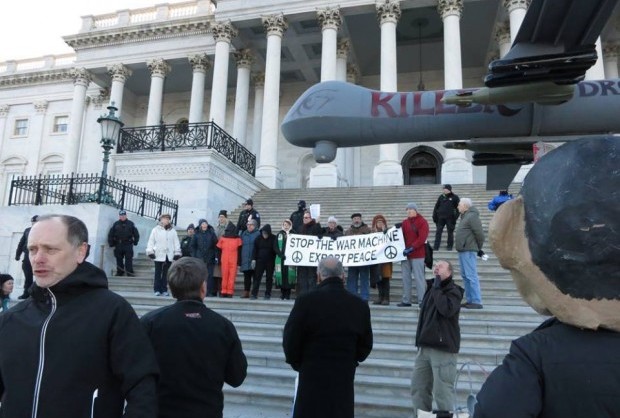 15 Arrested At ‘Real State Of The Union’

Activists Sought to Deliver Demand for a Real State of the Union, not a Speech of False Platitudes

Real SOTU would condemn US addiction to economic inequality, racial injustice, warmongering and the destruction of the planet

Washington, DC – Members of the National Campaign for Nonviolent Resistance (NCNR) and associates have been speaking out against the illegal actions of the United States government since 2003.  They have organized numerous actions across the country involving nonviolent civil resistance in order to speak out publicly against government policies. For example, on September 22, 2015 fifteen citizen activists were arrested at the White House while trying to deliver a letter urging President Barack Obama to listen to Pope Francis and end income inequality and militarism and to take action to mitigate the effects of climate chaos.

Most recently, members of NCNR wrote a petition to President Obama, which is available upon request, urging him to deliver a Real State of the Union.  Traditionally, Obama and other presidents fail to address all of the problems faced by the United States when delivering this annual message. If the president doesn’t address the need for drastic policy changes, then wars, poverty, the climate crisis, racism and systemic violence will continue.

Unfortunately, the U.S. Supreme Court Police would not allow two killer drone replicas to be placed on the sidewalk directly in front of the courthouse.  This was symptomatic of what is happening around the country.  As surveillance of US citizens broadens, First Amendment rights are eroding.  So instead about 50 peace and justice activists gathered for a rally on the sidewalk some 100 feet away from the courthouse.  Several speakers addressed a myriad of ills plaguing our society– the unending wars, the bloated Pentagon budget, mass incarceration, torture at the prison in Guantanamo, Islamophobia, killer drone strikes, and government support of the despotic Saudi Arabian monarchy which decapitates more people than ISIS.

Finally, the group did a march to the U.S. Capitol, and a delegation asked a Capitol Police representative if the petition and a list of alleged U.S. war crimes could be delivered to the office of the vice-president.  The representative denied the request, but indicated he would grant a permit to demonstrate in an area away from the Capitol steps.  He was informed that the demonstration was completed, and now the group wanted the petition to be delivered.  Because the citizen activists were being denied their First Amendment rights, they gathered on the lower steps holding a banner which read STOP THE WAR MACHINE EXPORT PEACE and sang the traditional “WE SHALL NOT BE MOVED.” Thirteen of them were then arrested and charged with “incommoding and obstructing.”

President Obama was to deliver his final State of the Union address at 9 PM. So the National Campaign for Nonviolent Resistance hoped to have the petition delivered to Joe Biden’s office some six hours before the oration.  Possibly if Biden’s office had the petition and delivered it to the president’s office, then Obama might forego a speech with empty platitudes.  Possibly his conscience could be pricked and he would have eloquently outlined all of the problems facing this nation and its people. Then he could have asked our elected officials to deal with the problems.

Instead President Obama failed to address the issues raised in the petition. For example, the NCNR message to the president included this: “A real State of the Union would be a frank speech which would condemn our country’s addiction to economic inequality, racial injustice, warmongering and the destruction of our planet.  After being honest about our failures, you would then urge our elected officials to go in a new direction, based on a democratic ideal for we the people, and not for we the wealthy.   Tell them to listen to the people, and not the corporations.  You could inform them that you will utilize diplomacy and other peaceful means.  You could tell them to listen to the scientific community and not the fossil fuel industry.”

In an authentic democracy citizens have a right to access their elected officials. A representative government should produce a budget that would benefit all and not a tiny minority of wealthy individuals and powerful corporations, and that is hurtful to the poor. But, this is not the case.  Since our government is under the grip of the elite and unwilling to represent the 99 %, NCNR members and associates went to Capitol Hill to express their vision for a just society.  However, the group was denied accesse, and thirteen of them were arrested–Carol Gay, from New Jersey, Martin Gugino, from Buffalo, Joy First and Phil Runkel, from Wisconsin, Malachy Kilbride, a Maryland Quaker, Linda LeTendre, from Saratoga Springs, New York, Joan Nicholson, a Pennsylvania Quaker, Max Obuszewski, Baltimore, Janice Sevre-Duszynska, from Kentucky, Trudy Silver & Alice Sutter, from New York City, Brian Terrell, Iowa, and the venerable Eve Tetaz in a walker, Washington, D.C.  They are to be arraigned in D.C. Superior Court at 11 AM on February 3, and the citizen activists look forward to their day in court.  They will argue their constitutional right to petition the government and remind the court that the Capitol belongs to the people.