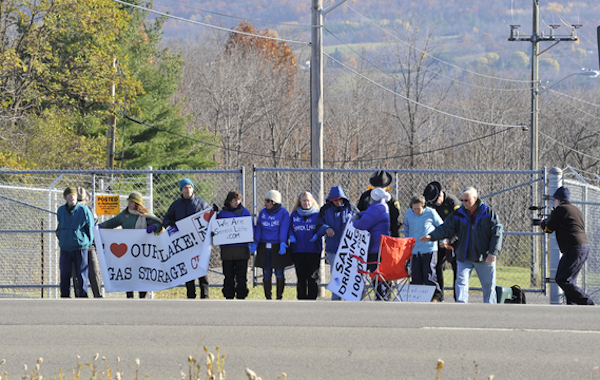 Entering the third week, starting at 7:00 AM this morning protesters blocked the gates of Texas-based Crestwood Midstream’s gas storage facility on the shore of Seneca Lake. 15 people were arrested at about 9:00 AM after Crestwood called the police. Last week, ten protesters were arrested in acts of civil disobedience blocking the gates, just as the 15 people did today. Protesters have held blockades at the Crestwood gate since Thursday, October 23; on Wednesday, October 29, they began blocking two of the gates to Crestwood. Notably, the ongoing protests also included a rally with more than 200 people at the Crestwood gate on Friday, October 24th.

Friday, October 24th marked the day that major new construction on the gas storage facility was authorized to begin. The ongoing acts of civil disobedience come after the community pursued every possible avenue to stop the project and after being thwarted by an unacceptable process and denial of science.

The unified action is called ‘WE ARE SENECA LAKE’. More information andpictures of the actions over the previous weeks are available atwww.WeAreSenecaLake.com.

The protests are taking place at the gates of the Crestwood compressor station site on the shore of Seneca Lake, the largest of New York’s Finger Lakes. The methane gas storage expansion project is advancing in the face of broad public opposition and unresolved questions about geological instabilities, fault lines, and possible salinization of the lake, which serves as a source of drinking water for 100,000 people. A Capital New York investigation recently revealed that Governor Cuomo’s DEC excised references to the risks of underground gas storage from a 2011 federal report on methane contamination of drinking water and has allowed key data to remain hidden.

*Note that the WE ARE SENECA LAKE protest is to stop the expansion of methane gas storage, a separate project from Crestwood’s proposed Liquefied Petroleum Gas (LPG) storage project, which is on hold pending a Department of Environmental Conservation Issues Conference.

Ruth Young of Horseheads, a former member of the Schuyler County Legislature, was among those arrested today, said, “We’re standing on what used to be a part of my legislative district in Schuyler County. I am embarrassed and saddened to see what is going on here, I’m sad to see that some of the people in this district are actually supporting this endeavor to store gas in a very unstable salt formation.”

John Dennis, PhD, of Lansing, who was arrested today, said, “I’m worried about water quality, there are severe salinity problems already, and I’m almost certain those will get worse because we think the existing problems are caused by gas storage started in 1964.”

Mariah Plumlee of Covert, a mother of three who was also arrested today, said, “I think it’s really important to do this, and if everybody did this then we wouldn’t have this problem. We moved here almost ten years ago because we knew it would be a wonderful place to raise a family.”

Lyn Gerry of Watkins Glen, a radio host in Schuyler County, arrested today, said, “Our elected officials have let us down, so we have to take matters into our own hands. I love Seneca Lake, I love this area. I’m not from here originally, I’ve traveled 3,000 miles to come to this beautiful place by this beautiful lake to live, and I’ve come from a place that greed has already destroyed. So I know what a land being destroyed looks like. So now, my back is to the wall and I must defend what I love.”

Note, press are encouraged to come to the court arraignment – for the ten protesters arrested on October 29th – on Nov. 5th starting at 6:00 PM at the Reading Town Hall, 3914 County Rt. 28, Watkins Glen.

As they have for a long time, the protesters are continuing to call on President Obama, U.S. Senators Schumer and Gillibrand, Governor Cuomo, and Congressman Reed to intervene on behalf of the community and halt the dangerous project.

Recently, the Tompkins County Legislature approved a resolution that opposes gas storage on the lakeshore, as well as the Yates County Legislature.  In so doing, they joined the Board of Supervisors of both Ontario and Seneca counties, which previously passed motions opposing gas storage, along with the Geneva City Council and the Watkins Glen Village Board.

In spite of overwhelming opposition, grave geological and public health concerns, Crestwood has federal approval to move forward with plans to store highly pressurized, explosive gas in abandoned salt caverns on the west side of Seneca Lake. While the New York State Department of Environmental Conservation (DEC) has temporarily halted plans to stockpile propane and butane (LPG) in nearby caverns—out of ongoing concerns for safety, health, and the environment—Crestwood is actively constructing infrastructure for the storage of two billion cubic feet of methane (natural gas), with the blessing of the Federal Energy Regulatory Commission (FERC).

Local businesses and wineries are part of broad opposition to Texas-based Crestwood-Midstream’s proposal to use old abandoned salt caverns along Seneca Lake to store millions of barrels of liquid petroleum gas (LPG) and billions of cubic feet of natural gas. The proposal has generated opposition from over 200 businesses, over 60 wineries, 13 municipalities (including neighboring Watkins Glen) and thousands and thousands of residents in the Finger Lakes region who are concerned about the threat it poses to public health and safety, one of the state’s largest supplies of drinking water, the local economy, and the area’s growing wine and tourism industry.

Residents, wineries and other local businesses have issued emergency calls to President Obama, U.S. Senators Schumer and Gillibrand, Congressman Reed and Governor Cuomo to immediately step in and stop this reckless project that threatens the heart of the Finger Lakes, many people’s health and the drinking water source for 100,000 people.

Additionally, an investigative journalist with DC Bureau recently uncovered other scientific objections to the project, to which FERC did not give due consideration in issuing approval. Independent scientists have warned about the unstable geology of the salt caverns, including the fact that a 400,000 ton chunk of rock – roughly the size of an aircraft carrier – had given way in the very cavern that the company proposed to use for gas storage.

Furthermore, in August, Dr. Rob Mackenzie, a retired CEO of Cayuga Medical Center, a hospital about 20 miles east, raised objections. An experienced risk analyst, Mackenzie prepared a formal quantitative risk analysis of the Crestwood methane gas proposal. Mackenzie analyzed accident events — major fires, explosions, collapses, catastrophic loss of product, evacuations — at salt cavern storage facilities in the United States dating back to 1972. He concluded that the risk of an “extremely serious” salt cavern event within Schuyler County over the next 25 years is more than 35%.

According to Energy Information Administration data uncovered by Mackenzie – reported by Peter Mantius of DC Bureau – gas storage facilities in salt caverns in the United States have had high rates of problems. Between 1972 and 2012,there have been 18 “serious or extremely serious incidents” at U.S. salt cavern storage facilities, Mackenzie wrote, citing EIA data. That translates to an incident rate in the US of about 60%.

Seneca Lake is economically critical to the region and New York State. A recent report on the state’s grape and wine industry showed that it contributes $4.8 billion to the New York State economy every year, supporting the equivalent of 25,000 full-time jobs, paying over $408 million in taxes, and generating over 5.2 million wine-related tourism visits. The Finger Lakes region, in particular, has gained increasing prominence as home to world-class wines, with many wineries earning awards in national and international competitions. Governor Cuomo highlighted the success of the industry at his 2013 Governor’s Cup Wine Competition in Watkins Glen, exactly where the gas storage facility is being proposed for location and this past summer, a Seneca Lake winery won the 2014 Governor’s Cup.

The region has become so widely known for its winemaking that vintners from the international community have begun to invest in the area as well.

The Finger Lakes is also considered a world-class tourism destination, with Shermans Travel naming it the #1 Lake Vacation in the world last year.

In addition to the over-industrialization such a storage facility would cause, salt cavern storage is historically unsafe. It presents the potential for explosive accidents and water contamination along the Finger Lakes. Salt cavern storage represents only a small percentage of gas storage facilities, but is responsible for the majority of instances of catastrophic failure. In 2001, gas migrated 7 miles from a salt cavern storage facility in Kansas, came up in abandoned brine wells and exploded, killing two people, destroying buildings and evacuating residents. There are many such abandoned brine wells just three miles from the proposed facility in downtown Watkins Glen, NY.