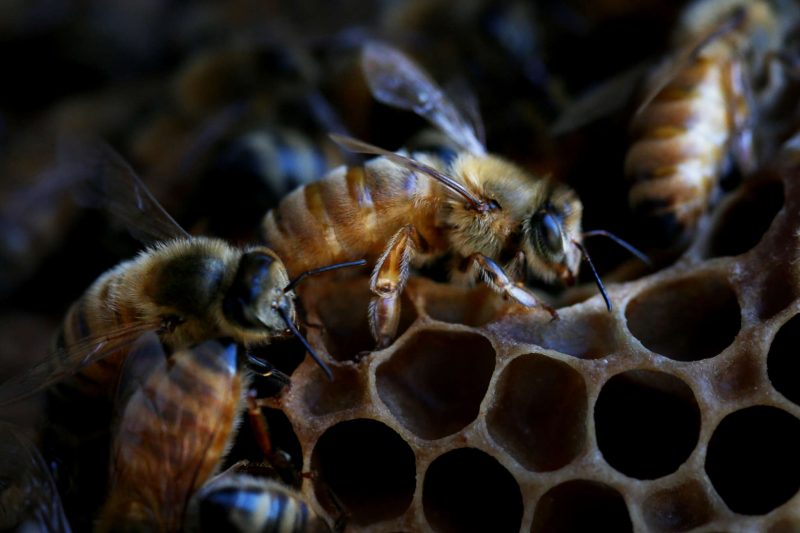 Fifteen Things Biodiversity Protectors Are Watching Out For In 2022

Above Photo: Bees are seen on a honeycomb cell at the BEE Lab hives at The University of Sydney on May 18, 2021 in Sydney, Australia. Lisa Maree Williams / Getty Images.

It’s no secret that the diversity of life around us is plummeting fast. In 2020 alone, scientists declared more than 100 species to be extinct. And that’s bad news not only for the creatures themselves, but for those of us (that would be all of us) who rely on them for food, to produce oxygen, to hold soil in place, to cleanse water, to beautify our world and so much more. According to the World Economic Forum, nature plays a key role in generating more than half of global GDP.

So, what can we do to reduce future harm? One big thing is to identify emerging threats and opportunities to protect biodiversity and proactively shape policies and actions to prevent harm early on. To this end, a group of scientists and conservation practitioners led by William Sutherland, professor of conservation biology at the University of Cambridge, each year creates and publishes a “Horizon Scan” Of Global Trends With Impacts For Biodiversity. Read on for this year’s top picks, and see our coverage of previous years’ horizon scans here or at the bottom of this page.

One of the big challenges for solar power is finding a place to put large arrays of photovoltaic panels. In recent years the notion of siting them on water rather than land has taken off dramatically, with more than 300 installations in place around the world today. The approach offers a number of benefits to biodiversity. For one, it saves land resources that might otherwise be covered with solar panels. It can reduce algal blooms on waterways. It can reduce the demand for other habitat-harming energy sources such as hydropower, and the evaporative cooling water offers makes the panels more efficient. All that said, still to be determined are the potential implications — positive and negative — for aquatic and marine ecosystems.

Energy Through The Air

Powerlines and the poles and towers that hold them are staples of civilization. Imagine being able to replace them with devices that transmit electricity through the air instead of along wires? That vision is closer to becoming reality, thanks to innovations in materials and in technologies that create and direct beams of energy — think wireless smartphone charging writ large. Deployment of long-distance wireless energy infrastructure could reduce the harms that conventional hardware pose to wildlife, such as collision risks for birds and bats. On the downside, it could also stimulate energy use and make it easier to live in remote locations, hastening the destruction or disruption of our planet’s few remaining untrammeled areas.

Think human impacts on biodiversity are limited to the biosphere? Think again. More than 2,000 communications satellites currently orbit our planet, and with current plans, the total could reach 100,000 in the next 10 years. The process of deploying and decommissioning these extraplanetary objects can disrupt the stratospheric ozone layer; deposit aluminum in, and otherwise modify the chemical composition of, the upper atmosphere; and alters Earth’s albedo — its ability to reflect sunlight. These alterations in turn affect the amount and type of radiation that hits the surface of our planet. As satellite deployment soars, implications potentially loom large for climate, exposure to ultraviolet light and other conditions that affect the well-being of living things.

The pursuit of alternative transportation fuels has taken many twists and turns, all with ancillary costs as well as benefits. Recent attention has turned to ammonia as a fuel for shipping. It can power fuel cells or engines. It has almost doubled the energy density of hydrogen, and poses fewer issues related to storage and transporting fuel to where it’s needed. The problem? Ammonia takes lots of energy to produce and can cause environmental harm if not burned completely. As interest in ammonia fuel grows, the authors warn against false claims of it being a “zero carbon” fuel and potential downsides, such as increased air pollution, that might accrue from its use.

Increasingly sophisticated tools for detecting and identifying DNA are able to pinpoint the presence — or even past presence — of all kinds of organisms from bits of their genetic material floating through the air. This capability opens the door to a wide range of conservation-assisting endeavors, from characterizing the members of a particular ecological community, to locating rare or endangered species, to tracking the expansion of the range of invasive organisms, to nailing perpetrators of illegal wildlife trade. So-called “eDNA” biomonitoring is already in use for detecting the presence of microorganisms, plants and fungi, and it appears to be feasible for tracking some animals as well. As the technology expands, so likely will the applications to efforts to understand and protect biodiversity.

Widespread efforts have taken place in recent decades to reduce use of hydrofluorocarbons (HFCs) in air conditioners, refrigerators and other cooling systems due to their capacity to contribute to global warming. Unfortunately, one of the top kinds of replacement chemicals, hydrofluoroolefins (HFOs) appear to have plenty of environmental issues of their own. As they decompose, HFOs form chemicals that pollute water and air. Some produce potent greenhouse gases. Environmental contamination with this long-lasting HFC substitute appears to on the rise. Unless regulation related to the deployment and decommissioning of refrigerants quickly and dramatically improves, we risk further contributing to climate change with a shift in practice intended to help reduce its risks.

Production of clinker, a key ingredient of cement, is bad for the climate and bad for biodiversity. It requires mining limestone, harming habitat for living things. And the process of turning limestone into clinker releases huge amounts of planet-warming carbon dioxide — both from the energy required to heat it up, and from the carbon dioxide limestone releases in the process. Cement production already is responsible for some 8% of global carbon dioxide emissions, and demand for cement is expected to grow. Using volcanic material in place of limestone could reduce greenhouse gas impact and would have additional benefit of possibly improving the ability of cement resist cracking. However, the authors write, we need to weight the environmental costs of mining and transporting volcanic material against the benefits of reducing limestone use.

Neonicotinoids are a class of chemicals that kill insects by disabling their nervous systems. Used to control pests in agriculture, they have come under fire in recent years for threatening populations of bees and other desirable insects. As neonicotinoids have been banned in the European Union and elsewhere, other, similar-acting insecticides have emerged. These substitutes, including sulfoxaflor and flupyradifurone, appear also to harm bees and some other desirable insect species, potentially posing new threats to insect biodiversity.

Some insects and other invertebrates have evolved a novel solution to their “can’t find a date” problem: They can reproduce without sex. The process, known as parthenogenesis, allows them to make more of their species when mates are scarce or absent. It also dramatically enhances their ability to gain a foothold in new territory if accidentally introduced there. At least one invertebrate, the marbled crayfish, evolved the ability to reproduce asexually in captivity and is now spreading rapidly across Europe, Africa and Asia, carrying with it disease that harms native species. As we cultivate other invertebrates for food or hobbies, we raise the risk that something similar might happen with other species.

Animal agriculture is a major source of greenhouse gas emissions, and “plant-forward” diets are gaining increased attention as a way to not only be healthier ourselves but to help our planet be healthier as well. China, for one, is taking it a step further: Rather than simply touting meals heavy on fruits and veggies, it has committed to cut its citizens’ meat consumption in half by 2030. Media campaigns and meat bans in some settings already have contributed to a decline in meat consumption, and the initiative has boosted innovations around synthetic meats, with the country’s plant-based meat industry expected to grow 20–25% per year in the foreseeable future.

Volunteer groups, nonprofit organizations, small-town governments and other local entities can be a valuable source of support for people living in rural areas. It turns out they can be a valuable source of support for other living things, too. Globally, the number of social institutions has grown from half a million in 2000 to 8.5 million in 2020, providing support for sustainable management of some 300 million hectares (700 million acres) of forests, farmland and waterways. If this trend continues, it bodes well for biodiversity conservation as more lands are managed in ways that keep them — and the plants and animals that inhabit them — thriving.

The East Asian–Australasian Flyway, which extends along the eastern coast of Asia and Australia through New Zealand, is one of the top hot spots in the world for diversity and sheer numbers of waterfowl and other water-loving birds, including critically endangered species. With massive development underway in China — one of the top wetland-containing nations in the world — it’s also among the most threatened: In the past decade, many wetland areas have been transformed into farmland and cities. Recently, however, several changes are starting to shine an optimistic light. The United Nations has provided a new level of protection to highly significant wetlands in Korea and China by adding them to its roster of World Heritage Sites. And China itself has begun investing in protecting key wetlands. If this trend continues and other countries follow suit, it could spell welcome relief for water birds throughout much of eastern Asia and the western Pacific.

The mangrove forests that coat coastlines in the tropics and subtropics harbor abundant plant and animal species that thrive at the intersection of land and sea. In past decades development has decimated many, destroying the biodiversity-nurturing and carbon-sequestering services they provide. But in recent years that tide has turned. Conservationists’ efforts to restore and preserve these rich habitats have helped reduce loss. In addition, these wetlands are also the accidental beneficiaries of other ecosystem changes: As inland forests are cut, erosion moves soil toward the coast where it can nurture new mangroves, and climate change is creating more of the warm habitat they need. Together, these changes have reduced mangrove loss to near zero, though local areas of depletion continue.

Intertidal zones — the portions of the ocean’s coast across which water advances and recedes with the tides — experience daily fluctuations in temperature, water level, salinity, physical disruption and predation. Now, they are seeing another variable: heat waves. Record temperatures in Pacific Northwest in June 2021 left mussels, clams, oysters, barnacles, sea stars, rockweed and more dead along thousands of miles of coastline. And that’s not all. Climate change threatens to change salinity of these complex and fragile ecosystems as well, as precipitation patterns change and polar ice melts. If this keeps up we’ll have more than a stinky mess: The complex ecosystems and the services they provide — stabilizing coasts, providing food, providing habitat, protecting water quality — will be fried, too.

Treasure — And Trouble? — Beneath The Seas

The seabed beneath Earth’s oceans harbors abundant bounties of precious metals and other mineable materials. New technologies have now made it possible to mine such materials, and one country, Nauru, recently announced plans to permit deep-sea mining. This announcement means that the International Seabed Authority must either set up specific ocean mining regulations or commit to reviewing applications under established, more general United Nations conventions. Ocean mining may reduce pressure to disrupt land habitat — but it also opens the door to new assaults on unique deep-sea ecosystems and the living things they harbor.