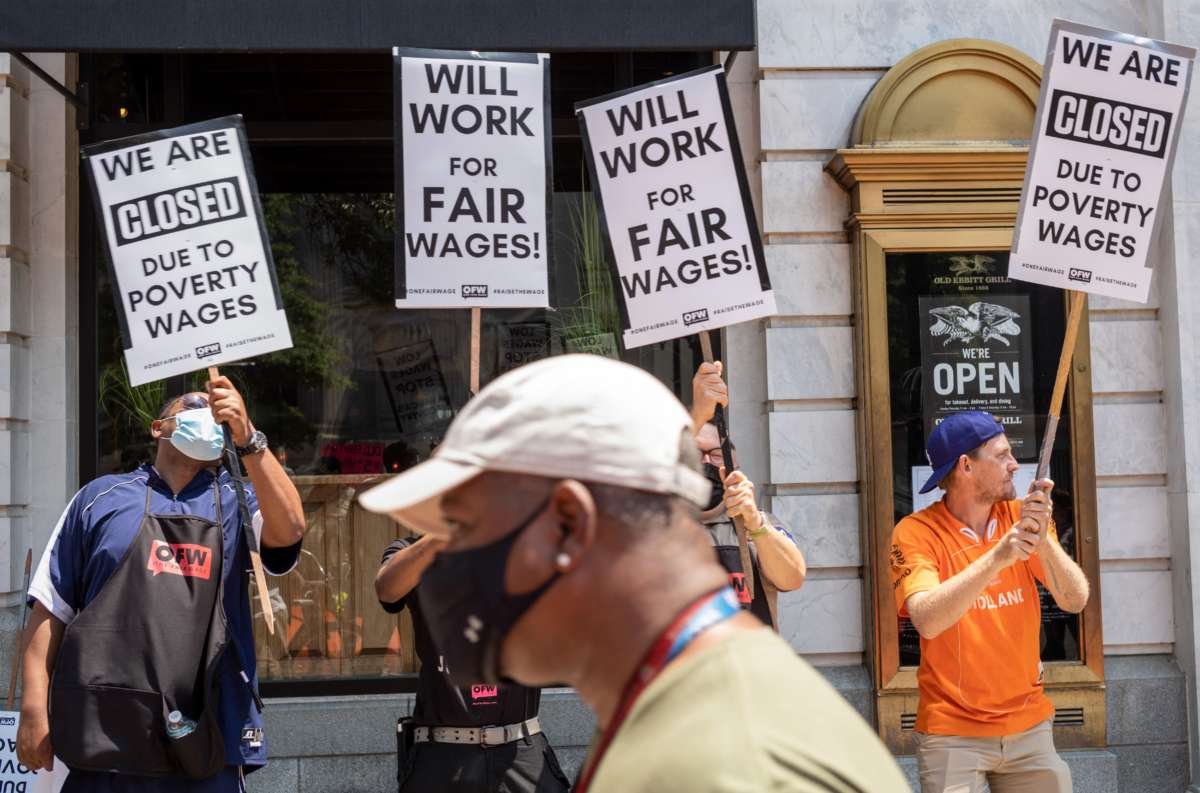 Above Photo: Activists take part in a protest outside of the Old Ebbitt Grill to call for a full minimum wage with tips for restaurant workers in Washington, D.C. on May 26, 2021. Mandel Ngan / AFP / Getty Images.

New data show that, as wages have risen across much of the economy, the average pay for restaurant and supermarket workers has risen above $15 an hour for the first time, reports The Washington Post. The milestone marks a win for both workers and, potentially, the Fight for $15 movement.

Employers struggling to fill low-wage positions as businesses reopened over the past year have blamed their problem on a so-called worker shortage. But in reality, economists say, it’s more likely that there was a wage shortage as workers were unwilling to do a job that is more dangerous during the pandemic for the same wage as before COVID-19 was raging through the country.

Now, it seems, employers are responding, according to the Bureau of Labor Statistics data analyzed by The Washington Post. Eighty percent of U.S. workers make at least $15 an hour now. “Job sites and recruiting firms say many job seekers won’t even consider jobs that pay less than $15 anymore,” write Andrew Van Dam and Heather Long for the Post. “For years, low-paid workers fought to make at least that much. Now it has effectively become the new baseline.”

Indeed, the Fight for $15 movement has been ongoing for nearly a decade — ever since fast food workers began protesting for higher wages in 2012. The new milestone represents a win on the wage front for low-wage workers who find themselves in a position to exercise larger control over the wages they can demand as the pandemic continues.

As Bloomberg noted on Monday, “For the first time in decades, the American worker is finally in command when it comes time to talk money.” Companies like Kroger and Under Armour are raising wages, the publication points out, to attract more workers. CVS, Target, and others are raising their wages to a minimum of $15 an hour.

When large corporations raise wages, smaller businesses often follow, research has found. And, since wages rarely decrease once they rise, these changes are likely to remain permanent.

It’s important to note that the $15 an hour wage isn’t the minimum wage but rather the average wage now for restaurant and supermarket workers, which means many workers in these industries still make less than that. But it’s still indicative of the way that the job market is shifting, experts say.

“It wouldn’t be fair to call $15 an hour the new minimum, but I think it’s a guiding star wage. It’s a baseline wage that folks compare offers to,” Nick Bunker, economic research director at Indeed Hiring Labs, told The Washington Post.

With many service workers making less than $15 an hour, however, advocates say it’s still important for the federal minimum wage to be raised. The current minimum wage is $7.25 an hour, and it hasn’t been raised in 12 years.

A recent attempt in Congress to raise the minimum wage to $15 an hour spearheaded by Sen. Bernie Sanders (I-Vermont) was rejected earlier this year, leaving the future of the proposal uncertain. But even $15 an hour can be difficult to live off of, especially for families.

Wages are also not rising equally for all groups of workers. Data from last month show that, while wages are on the rise, they’re rising at a slower rate for Black men and Latinas than they are for other groups.