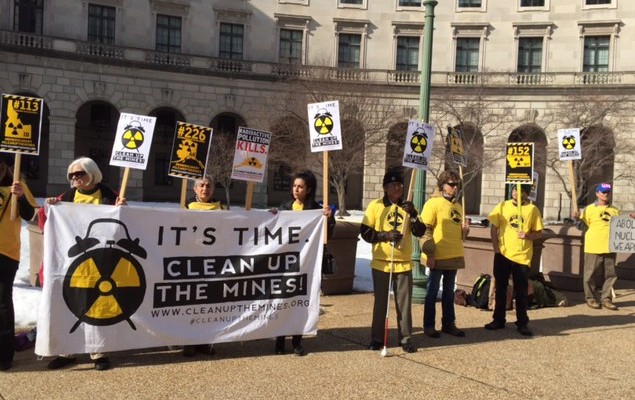 ‘We are the Miner’s Canary’: Indigenous Organizations Call for Clean Up of ‘Homegrown’ Radioactive Pollution Crisis.

Washington, DC — On Thursday, January 28 at 12:30 PM, representatives of Indigenous organizations from the Southwest, Northern Great Plains, and supporters called for “no nukes” in a protest addressing radioactive pollution caused by 15,000 abandoned uranium mines (AUMs) posing a toxic threat in the US. The demonstration was held at the Environmental Protection Agency (EPA) headquarters to call for immediate clean up of these hazardous sites, protection of Indigenous sacred areas from uranium mining, and for intervention in communities where drinking water is poisoned with radioactive contamination. The groups charged that the EPA has been negligent in addressing these toxic threats that severely threaten public health, lands, and waterways.

“Native American nations of North America are the miners’ canaries for the United States trying to awaken the people of the world to the dangers of radioactive pollution”, said Charmaine White Face from the South Dakota based organization Defenders of the Black Hills.

South Dakota has 272 AUMs which are contaminating waterways such as the Cheyenne River and desecrating sacred and ceremonial sites. An estimated 169 AUMs are located within 50 miles of Mt. Rushmore where millions of tourists risk exposure to radioactive pollution each year.

Out of 272 AUMs in South Dakota only one, the Riley Pass Mine located on US Forest Service held lands, has been cleaned up but the process has been called inadequate and concerns were raised about the reclamation budget. “My concern is how with the balance remaining from a $179 million mine reclamation settlement, the USFS says that local affected communities will be able to use the remainder on community projects and training to replace uses of the Grand River, which flows into Missouri River. The river is destroyed through this act of radioactive genocide.” stated Harold One Feather, a member of Defenders of the Black Hills, “After discussing the $179M Tronox settlement for the Riley Pass Uranium Mine Reclamation, the US Forest Service said the affected communities can submit budgets to use up any remaining balance after mine reclamation.”

Outside of the EPA headquarters the groups chanted, “Radioactive Pollution Kills!”, “No More Churchrock Spill, No More Fukushima!”, and “Clean Nuclear is a deadly lie!” in response to the EPA’s Clean Power Plan which they state promotes nuclear energy.

A massive banner stating “Radioactive Pollution Kills” with the image of a Miner’s Canary and radioactive warning symbol was dropped inside the EPA headquarters.

The Clean Up The Mines! campaign is focused on passing the Uranium Exploration and Mining Accountability Act that would ensure clean up of all AUMs. The act was submitted as a draft to Congressman Raúl Grijalva (D–AZ) two years ago but has yet to be introduced to Congress.

Currently, no comprehensive law, regardless of mining era, requires clean-up of all these dangerous abandoned uranium mines allowing corporations and the federal government to walk away without taking responsibility for the continuing harms they have caused.

“This is an invisible national crisis. Millions of people in the United States are being exposed as Nuclear Radiation Victims on a daily basis.” said Mrs. White Face, “Exposure to radioactive pollution has been linked to cancer, genetic defects, Navajo Neuropathy, and increases in mortality. We are protesting the EPA today because we believe that as more Americans become aware of this homegrown radioactive pollution, then something can be done to protect all peoples and the environment. In the meetings we had in DC, not only were AUMs discussed, but we also talked about radioactive pollution from coal dust, coal smoke, and in water.
These show a need for amendments to the Clean Water Act and the Clean Air Act.” said Mrs. White Face.

“The U.S. is violating its own Executive Orders and laws intended to protect areas sacred to Native American people on public lands by applying the General Mining Act of 1872.” Petuuche Gilbert of the Laguna Acoma Coalition for a Safe Environment & President of the Indigenous World Association, “The U.S is discriminating against Indigenous peoples when it permits mining on these lands. Specifically, the U.S. is violating: Executive Order 13007, Executive 13175, the American Indian Religious Freedom Act, the Religious Freedom Restoration Act, as well as the United Nations Declaration on the Rights of Indigenous Peoples.”

“With adherence to out-dated, racist policies promoting colonialism, such as the 1872 mining law,Indigenous peoples across the country will continue to be oppressed, and we will continue to demand that our land be returned and restored to its original condition, to that of before the colonization by the United States,” stated Leona Morgan of Diné No Nukes. “The United Nuclear Corporation mill tailings spill of 1979, north of Churchrock, New Mexico left an immense amount of radioactive contamination that down-streamers, today, are currently receiving in their drinking water. A mostly-Navajo community in Sanders, Arizona has been exposed to twice the legal limit allowable for uranium through their tap–this is criminal!” said Morgan.Diné No Nukes is a collective focused on educating the general Navajo population about the issues created by US Atomic Energy Commission, as well as ongoing and new threats from the nuclear industry.

Tommy Rock, a member of Diné No Nukes and graduate student from the state of Arizona stated that the water crisis in Flint, Michigan was extremely similar to a crisis near the Navajo Nation in Sanders, AZ. “The regulatory agencies are responding by sending the Army National Guard to provide bottle water for the community of Flint. However, the small community of Sanders which is also predominantly an Indigenous community that is off the reservation are not receiving the same response from the state regulatory agency or the state legislatures and the media,” stated Rock who worked on a recent study that uncovered levels of uranium in the drinking water system of residents and an elementary school in Sanders that violated the drinking water standard for uranium. Rock continues, “The same can be said about two Lakota reservations. They are Pine Ridge and Rock Creek, Standing Rock Reservation that have not received any assistance from regulatory agencies. This exemplifies the inconsistency among the US EPA regions about responding to Indigenous communities compared to non-Indigenous populations which are facing the same issue regarding access to safe drinking water.”

Mr. Rock called for the community of Sanders to be included in the second Navajo Nation 5-Year Clean-Up Plan and an amendment to the Clean Water Act. “Another issue around water is the mining industry is contaminating the rivers. They are disregarding the Clean Water Act because the act does not address radionuclides. This needs to be amended so the policy can enforce that companies be accountable for their degradation to the watershed areas. This can also be beneficial to US EPA because they do not have the funds to clean every contaminated river by the mining industry and other commercial industry,” stated Mr. Rock.

“These uranium mines cause radioactive contamination, and as a result all the residents in their vicinity are becoming nuclear radiation victims,” states Petuuche Gilbert, a member of the Acoma Nation, LACSE, MASE, and IWA. “New Mexico and the federal government have provided little funding for widespread clean up and only occasionally are old mines remediated. The governments of New Mexico and the United States have a duty to clean up these radioactive mines and mills and, furthermore, to perform health studies to determine the effects of radioactive poisoning. The MASE and LACSE organizations oppose new uranium mining and demand legacy uranium mines to be cleaned up,” said Mr. Gilbert.

“In 2015 the Gold King Mine spill was a wake-up call to address dangers of abandoned mines, but there are currently more than 15,000 toxic uranium mines that remain abandoned throughout the US”, said Ms. White Face. “For more than 50 years, many of these hazardous sites have been contaminating the land, air, water, and national monuments such as Mt. Rushmore and the Grand Canyon. Each one of these thousands of abandoned uranium mines is a potential Gold King mine disaster with the greater added threat of radioactive pollution. For the sake of our health, air, land, & water, we can’t let that happen.”