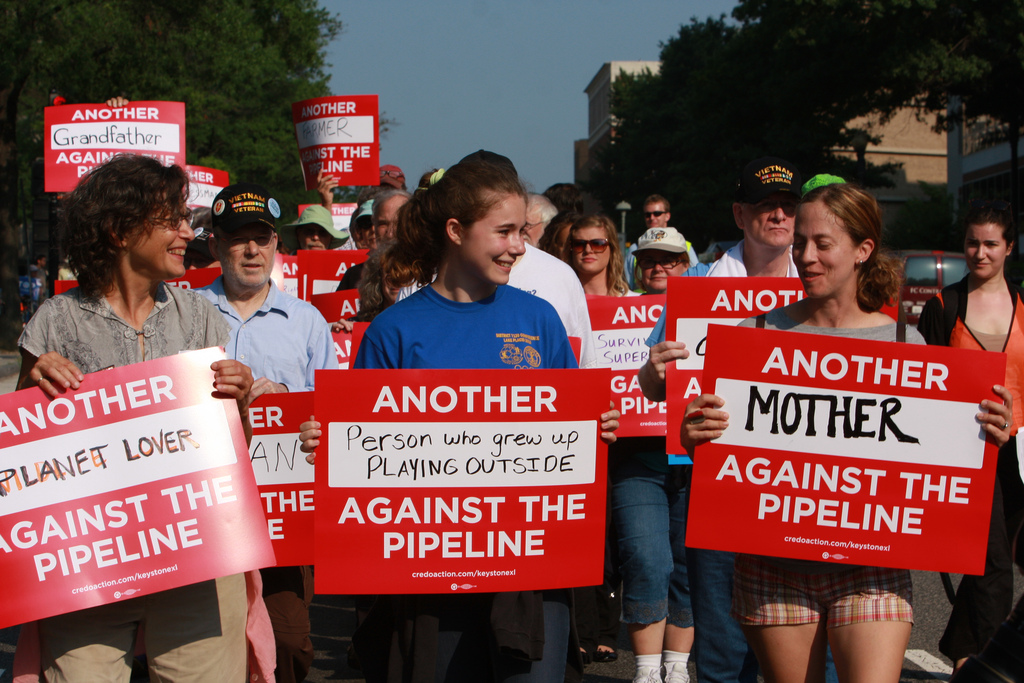 Thirty-six people risked arrest on October 8th while staging a peaceful sit-in at the State Department’s office in Secretary Kerry’s hometown of Boston in opposition to the controversial Keystone XL pipeline. More than 200 supporters also rallied at Monday’s event in support of those risking arrest.

For the second time this year, the State Department refused to arrest grandparents, scientists, President Obama and Secretary Kerry supporters and other anti-Keystone XL protesters even though both entrances to the building were blocked. The State Department’s refusal to arrest may be a signal that growing public opposition will play a role in the agency’s upcoming recommendations to the White House regarding TransCanada’s application for a presidential permit for the Keystone XL pipeline.

The sit-in is part of a series of civil disobedience actions organized by CREDO, Rainforest Action Network and the Other 98% to maintain pressure on President Obama and the State Department to reject Keystone XL, a giant oil pipeline that would carry some of the dirtiest oil on the planet through America soil to be shipped to China.

The House Republicans recently included approval of the Keystone XL pipeline in a list of demands in order to raise the debt ceiling. Despite the fact that House Republicans forced the federal government to shut down, the State Department building in Boston remained open.“Like millions of other students, I voted for Barack Obama in 2012, my first presidential election,” said Varshini Prakash of Students for a Just and Stable Future. ”He campaigned on addressing the climate crisis head-on, and as a young person that inspired me.”

“If the president is serious about keeping his campaign promise and stabilizing the climate for future generations, then stopping the KXL pipeline should be his number one priority,” Prakash said.

“I worked hard to get President Obama elected, in part because he told us that climate change is the issue of our generation,” said Kevin Kuenster, who risked arrest at today’s event. “Our window of opportunity to fight climate change is closing fast and we need to be on the right side of history. As a parent of two young children, I have the obligation not just to be involved, but to show them that there are things worth fighting for.”

Secretary Kerry, who is a longtime environmental advocate, leads the State Department which is the agency tasked with determining whether the Keystone XL pipeline is the nation’s best interest. However, the State Department’s review process has so far beenfraught with conflict of interest. The State Department has an ongoing investigation into the contractor that drafted the latest controversial environmental analysis of the Keystone XL pipeline for failing to disclose ties with TransCanada, the foreign oil company seeking to build the giant pipeline through American soil.

“Shutting down the government and laying off hundreds of thousands of workers is clearly not in our national interest. But shutting down the Keystone XL pipeline which would mean game over for the climate definitely is,” said Becky Bond, political director at CREDO. “These law abiding Americans are committing civil disobedience to stop a foreign oil company from building this pipeline—a portrait of courage that is in stark contrast to what we’re seeing from the spineless politicians in Washington DC.”

“Our country should be leading the world in combating the climate crisis and transitioning to the clean energy economy of the future. But we can’t because Washington, DC has been captured by the dirty money of Big Oil, Gas and Coal,” said John Sellers, executive director of The Other 98%. “Our children are counting on us to break our addiction to fossil fuels and that’s why these brave Americans are risking their freedom to stop the KXL Pipeline.”