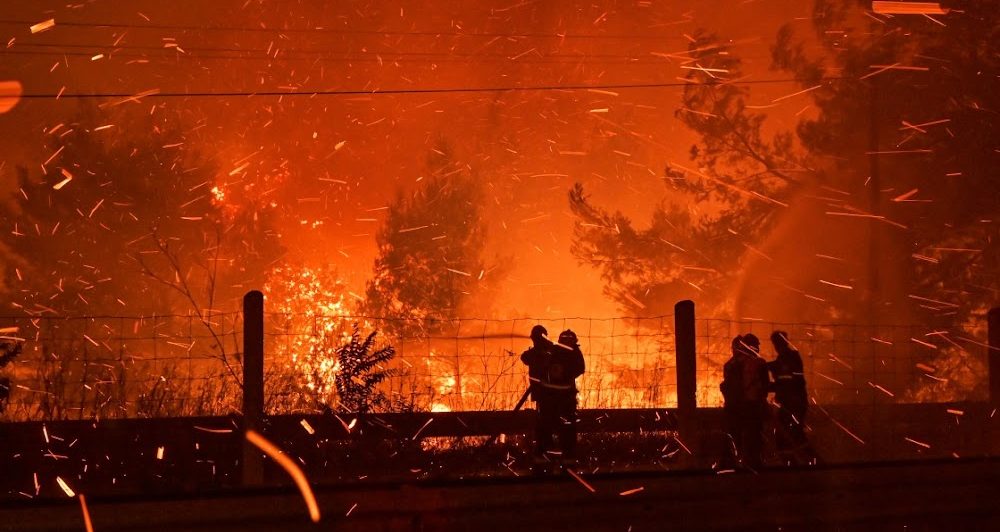 Above photo: Firefighters try to put out a fire as flames spread over a highway during a wildfire on 5 August 2021 in northern Athens, Greece. Milos Bicanski / Getty Images.

But as COP26 draws to a close, it’s clearer than ever they won’t take the radical action needed to avoid disaster.

Regardless of the outcome of COP26, one inevitability is that the rich and powerful celebrate whatever the conference produces as vital progress. Only a disaster on the level of COP15 in Copenhagen might put a stop to the self-congratulatory triumphalism. Already, though, most observing the negotiations with a critical eye are highlighting how inadequate their product will be. Ed Miliband has said we’re ‘miles from where we need to be’ and Greta Thunberg declared COP26 to be a ‘failure’.

These condemnations are backed up by analysis from Climate Action Tracker (CAT), assessing governments’ short-term commitments for the next decade. Its study reveals that our trajectory coming out of COP26 would take us to a devastating 2.4oC warming by the end of this century.

The Paris Agreement signed at COP21 included an ambition to limit warming ideally to 1.5oC or 2oC at worst. CAT’s optimistic best-case scenario, based on the ‘full implementation of all announced targets including net zero targets, binding long-term targets and nationally determined contributions’, projects global heating of 1.8oC by 2100. Making a more realistic assessment of policies currently being implemented, we go up to 2.7oC. Whatever way you look at it, we seem set for catastrophic levels of warming in our lifetimes.

During COP season it’s all too easy to get bogged down in abstract numbers and distant scenarios. So to bring in some perspective, when we talk about global average temperature rises by the end of this century, we mean the habitability of the planet during the latter years of the average person born in the UK today. When we discuss if and how we’ll achieve net-zero by 2050, this is what the economy looks like for somebody my age at a point when we’ll have well over a decade left before retirement.

Current levels of warming are at about 1.1oC and we can already see the devastating effects this has brought. There is no ‘safe level of warming’, and if there is, we’re far past it. Already we have seen wildfires ravage North America, Australia, Greece, Italy, Algeria, and beyond. In most cases, lives have been lost and people have been displaced from their homes.

This year, we also saw extreme flooding right across Europe as well as China, India, Pakistan, and beyond. They caused billions of dollars’ worth of damage, destroyed homes and businesses, and damaged farmers’ crops. In 2019, Cyclone Idai ripped through Southern Africa and destroyed 90 percent of Beira, Mozambique’s capital. We are currently seeing deadly drought in Madagascar, Kenya, and (as ever) beyond.

This is just a partial picture of the world at 1.1oC. The world at 1.5oC, supposedly the limits of international ambition, would be considerably worse. Imagine, then, what 2.4oC of warming would bring. The headline is that all of these effects will be far more frequent, severe, and geographically dispersed. They will become a factor of everyday life, including for those who have not yet considered the possibility of a flood or a wildfire or drought directly affecting them. Emanating from these impacts, and going further than their raw destruction, are even deeper socio-economic consequences.

The global food system will be put under increasing strain as agriculture is hit by all of the above effects. Crops will fail more and more, and rearing livestock will be more difficult. Fisheries will be depleted. We are already beginning to see the large-scale failure of certain crops. Widespread food insecurity and shortages will become commonplace. So too will the displacement of peoples from their homes and communities.

Over the few years I’ve been involved in the climate movement, official predictions around the number of climate refugees have been creeping higher and higher. The World Bank, for example, has recently reported that over 200 million people could be displaced by 2050. The majority of this displacement will likely take place internally to already vulnerable countries or regions. Disruption to food systems combined with the forced movement of people will inevitably create humanitarian crises to be navigated in the context of extreme weather.

It is hard to be precise about what 2oC of warming will mean compared to 2.4oC or 2.7oC. We do know, though, that with every fraction of a degree of warming the situation gets intolerably worse. We can also say that any claims that we are ‘on track’ to hit 2.4oC is itself optimistic. This is based on what governments are pledging, not what they’re actually doing.

The UNFCCC framework, the Paris Agreement, and COP26 lack the mechanisms to ensure that even these meagre targets are met. Rather than a central coordination of how much each country is responsible for, the structure of ‘nationally determined contributions’ (NDCs) means that they are entirely voluntary. There are no processes of enforcement—no sanctions or penalties—for failing on even what they themselves have said is manageable.

For poorer countries, there is nowhere close to enough financial support to meet these targets. Much is made of the target of providing $100 billion in finance per year—so far also not met—but this is a woefully inadequate figure. When we begin to factor in how climate change itself will undermine the transition and the need to make sure it is just for all involved, it becomes clear that the wealthiest countries have no interest in providing what is necessary.

The absence of real plans, lack of enforcement mechanisms and insufficient finance can only lead us to believe that we are staring at the face of runaway climate change. On the current trajectory, we will look back on these crucial years at the end of the century and laugh at the naïve optimism of those who believed we might meet even the most inadequate targets.

Having commendably criticised the inadequacy of COP26, Ed Miliband rightly called for greater support for developing and vulnerable countries. He also asserted that despite the challenging situation we find ourselves in, the ambition of hitting 1.5˚C of warming isn’t dead. He called on countries to come back next year (to COP27, in Egypt) to further close the gap.

Unfortunately, though, this is where the mainstream centre-left approach to these negotiations comes unstuck. Within the current framework of international climate diplomacy, 1.5oC is dead. COP26 was never going to take us meaningfully closer to it, and neither will COP27. We cannot afford to invest our hopes in the same governments getting round the table one more time to have one more go. We must fundamentally change the rules of the game.

The COP process is too wedded to the very market systems which are producing emissions in the first place. Its priority is not decarbonisation but maintaining the power of the global elite. If we want to keep the chance of 1.5oC alive, and we should, then we need to be serious about reorganising the global institutions which mediate negotiations.

We must call for a new process based on the principles of equity, justice and solidarity. Rapid and just mitigation must be the starting point, with much greater power for poorer countries, a stronger role for civil society, and guarantees around enforcement and finance. Only with new institutions which actively disempower capital (rather than hand the fossil fuel industry the largest delegation) and re-empower the people and nations most at risk do we stand a chance of anything close to climate justice. If we continue along the same path, we are certain to head straight past 2.4oC of warming and all the catastrophe that comes with it.

Chris Saltmarsh is co-founder of Labour for a Green New Deal. His first book is Burnt: Fighting for Climate Justice (Pluto Press, September 2021).