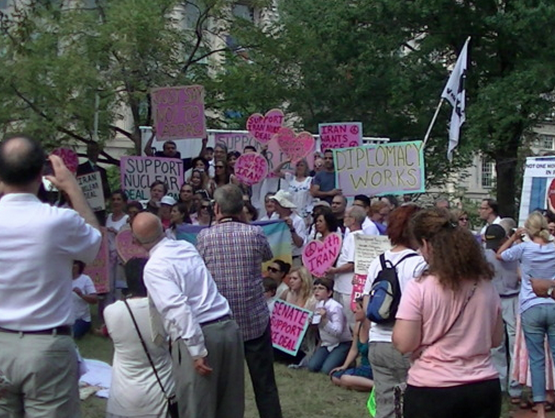 Today, Margaret Flowers and Kevin Zeese will be interviewing Medea Benjamin of CODE PINK, the principal organizers of the Peace Picnic on Clearing The FOG Radio at 11:00 AM Eastern. The show will be available by podcast later today.

On the 30th of August, Code Pink stages a picnic for peace with Iran and the nuclear deal that Obama has signed but some in Congress are attempting to block. US Park Police and park rangers interfered, demanding that food be served only on the curb, that not even cushions be set on the stone chairs at the chess tables, and that a woman in a chair with health issues either leave or not use the chair, Also, a very interesting dialog resulted with an Iranian resistance group that showed up to protest executions in their country. Code Pink allowed them onstage to speak and agreed with them that capitol punishment is unacceptable anywhere.

The situation at Code Pink’s picnic was in stark contrast to what happeneed after the coup in Egypt where supporters and opponents of the coup both showed up in Lafayette Park at once and ended up duking it out on Penn Ave in front of the White House as horse cops tried to keep them apart. Instead of fighting and shouting there was dialog. The only aggression anyone encountered was from the rangers and Park Police. Had Code Pink been the stooges of the Iranian government AIPAC’s friends have protrayed them as, it is doubtful that representatives of the Organization of Iranian Fadaee Guerillas would have been invited on stage and given the microphone.

The main objection of the Iranian opposition speakers was to decoupling the nuclear negotiations for human rights. A counter argument to that is that a nuclear confrontation between the United States and the Soviet Union in the Reagan years would not have helped the human rights situations in El Salvador nor in Poland. A discussion of human rights in the negotiations would have been interesting, as the US would also have been called on the carpet by Persian diplomats for its own human rights abuses. Quite possibly this would have derailed the talks and led to the continuation of nuclear weapons development in Iran.

The United States, like Iran, China, and Saudi Arabia is notorious worldwide for executions. One of the women from the Iranian opposition group said in the last year a little over 1,000 people have been executed in Iran. I see little reason to doubt her report. Here in the US, there have been only a few court-ordered executions, but there are estimates of up to 1,000 extrajudicial “street executions” in the US in the form of shootings by police since Michael Brown was shot.

The Organization of Iranian Fadaee Guerillas distributed a statement protraying the nuclear disarmnament deal as a defeat for Khamani, as a deal forced upon their enemy by years of sanctions. They called the entire nuclear program a diversion of money belonging to the people of Iran. At the bottom of their leaflet, they said the regime agreed to the deal “from a position of weakness. We should take advantage of that weakness now.”

This statement implies that GOP and AIPAC bought members of Congress who are trying to sink the nuclear deal will be doing so against the wishes of at least some Iranian opposition groups. The strongest opponents of the nuclear deal in the US are AIPAC (the Israeli lobby) and the same neocons like Cheney and the American Enterprise Institute (AEI) who started the Iraq War and made the existance of ISIS/Daesh possible.