Above Photo: Demonstrators gather in front of the White House in Washington, D.C., to protest the Dakota Access pipeline. Opposition to the project has further inspired activists around the country to fight pipelines in their backyard. Credit: JIM WATSON/AFP/Getty Images

Donald Trump may promise to get more pipelines built, but activists are energized by the grassroots success of 2016 and vow to keep fighting.

When President-elect Donald Trump takes office next month, his pro-drilling, anti-climate action energy policy will buoy the oil industry. But it will also face staunch resistance from a pipeline opposition movement that gathered momentum, particularly with this year’s successful showdown over the Dakota Access pipeline, and shows no signs of slowing.

Local grassroots action, governments’ environmental concerns and market forces have stopped or delayed dozens of fossil fuel projects since the high-profile Keystone XL pipeline was cancelled in November 2015, and activists are continuing to oppose at least a dozen oil and gas pipelines around the country.

“There have been people fighting pipelines since pipelines first went into the ground,” but awareness of the issue has grown due to the Keystone XL and Dakota Access, said Cherri Foytlin, director of the advocacy group Bold Louisiana.

Opposition to pipelines has united environmentalists, Native Americans and rural landowners of all political backgrounds, many of whom resent the pipeline companies’ use of eminent domain to seize their land.

This “Keystone-ization” effect, along with low oil prices, has created a hostile environment for fossil fuel expansion projects. The election of Trump, who favors building the Keystone as well as the Dakota Access, will put advocates back on the defense—but they say they are ready for the challenge.

“I think the scope of what we are being asked to do might change,” said Andy Pearson, Midwest tar sands coordinator for MN350, a Minnesota green group. He said activists will have to work to maintain the victories they’ve won in the past few years.

“I’ll have to fight just as hard under a Trump administration as I’d have to under a Clinton administration,” Foytlin said. Her main concern is that Trump will be “brazen enough” to condone the use of force against protesters, she said.

Environmentalists have prioritized stopping pipelines because every pipeline is a decades-long investment in fossil fuels, locking in demand and hampering a transition to cleaner fuels. Successfully blocking them limits companies’ ability to move their product to market, which feeds into a strategy of “making life more difficult for the fossil fuel industry going forward,” said Adam Rome, a history professor at the State University of New York at Buffalo who studies the environmental movement. 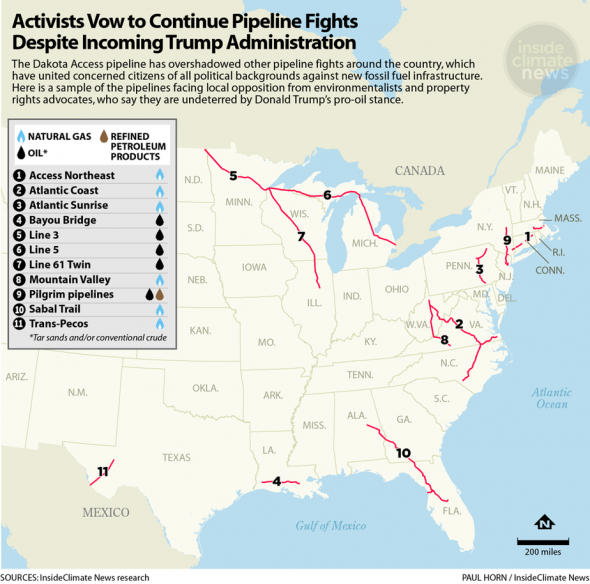 Many groups have used the national attention on the Dakota Access to publicize opposition to other pipeline projects. In Florida, activists fighting the Sabal Trail natural gas pipeline have held #NoDAPL solidarity events and protests to slow the project, which is already under construction.

In Texas, advocates credit the Dakota Access movement for inspiring local action against the Trans-Pecos gas pipeline, and two activists were arrested in early December for blocking access to construction equipment.

Since the Dakota Access captured the spotlight, “there has been this outreach and outcry of people wishing to connect these battles into one,” Foytlin said. “It’s less about pipelines, and about the battle to win the hearts and minds of people.”

Here is a summary of some of the most contested pipelines around the country:

The Canadian company Enbridge is building a new tar sands oil pipeline from Hardisty, Alberta to Superior, Wisc. to replace the aging Line 3. The new line would carry up to 760,000 barrels per day—nearly double the capacity of the old line.

A recent public meeting on the pipeline was cut short after Enbridge officials said they felt intimidated by the questions being shouted by activists and landowners. Many in the crowd had participated in #NoDAPL protests at Standing Rock.

This decades-old oil pipeline runs under the Straits of Mackinac, which connects Lake Huron to Lake Michigan. Environmentalists have long warned that a spill would pollute the drinking water for millions of people.

Enbridge is required to make safety improvements on this pipeline as part of a settlement deal for its 2010 tar sands spill from Line 6B. Several Native American tribes have sued for a full environmental review before Enbridge does any work.

The new “twinned” Line 61 would run parallel to four existing Enbridge lines, one of which is named Line 61.

Opposition comes from several Wisconsin grassroots organizations. One of these is called 80 Feet Is Enough, which advocates for property rights. (The term “80 feet” refers to the width of the pipeline easement used for the existing four Enbridge lines). Founder Mark Borchardt said he plans to pressure state legislators to limit private companies’ use of eminent domain.

Another group is the Wisconsin Safe Energy Alliance (WISE), created in part by the Sierra Club. Elizabeth Ward, a Sierra Club staff member and co-facilitator of WISE, said the alliance was launched as a welcoming space for all concerned citizens, regardless of their views on climate change. WISE has provided legal support to landowners along the pipeline corridor and Ward hopes it will serve as a model for future Sierra Club-supported local action.

Spectra is updating its natural gas pipeline network along the East Coast by proposing several new segments in Massachusetts, Connecticut and New York. The project was originally backed by Eversource and National Grid, but the utility companies pulled out after the Massachusetts Supreme Court ruled they couldn’t charge their customers to pay for the new pipeline.

Activists are also pressuring local government to take action. Carolyn Barthel, coordinator of the advocacy group 350 Mass Greater Franklin Node, said she’s worried about the pipeline’s environmental impacts and is coordinating efforts with more than a dozen towns to pass resolutions against the project.

These two proposed, parallel pipelines would carry crude oil from Albany, N.Y. to Linden, N.J., and refined products in the other direction. Each pipeline would have a capacity of 200,000 barrels per day.

New York state regulators have warned about the environmental impacts of pipeline construction, particularly on local waterways. More than 20 municipalities along the route have passed resolutions against it, and the grassroots group Coalition Against Pilgrim Pipelines continues to pressure local leaders to take action.

These pipelines are designed to move natural gas from West Virginia to Virginia and North Carolina. Local grassroots groups have delayed both pipelines through court proceedings in defense of property rights. The Bold Alliance, an advocacy group that played a pivotal role in stopping the Keystone XL, plans to hire “pipeline fighters” in the Mid-Atlantic region in 2017.

Resistance is particularly strong in Lancaster County, Penn., where activists have been arrested for protesting on company property. In October, advocates built what looks like a small wooden house on stilts along the pipeline route and said they would occupy it if and when Williams begins construction.

Construction on this pipeline, which would bring up to 1.4 billion cubic feet of natural gas a day from Texas to Mexico, began in September. The fight against Trans-Pecos has united traditional environmentalists who worry about the pipeline’s route near Big Bend Ranch State Park, and local ranchers trying to protect property rights.

Construction is underway on the 515-mile natural gas pipeline that runs through Alabama, Georgia and Florida, but activists are determined to keep fighting. Protests in three major Florida cities are scheduled for Dec. 29, and organizers have planned a civil disobedience event for Jan. 17.

The 162-mile oil pipeline would run from Lake Charles to St. James, Louisiana, as an extension of an existing pipeline system that would connect to the Dakota Access project if it’s completed, eventually allowing Energy Transfer to ship oil from the Bakken to Louisiana.

Foytlin, the Bold Louisiana director, said the route cuts through the bayou and would cross more than 700 bodies of water, including streams and small lakes. It would also disrupt hundreds of acres of wetlands, which act as buffers during floods.

“We have had devastating floods here in Louisiana,” said Foytlin, whose house was flooded several months ago after a rainstorm.

Foytlin said the pipeline has united climate activists and those who make their living gathering crawfish. These fisherfolk tend to be more politically conservative, she said, but they worry an oil spill would threaten their fishing grounds.

Bold Louisiana is pushing the Army Corps of Engineers to conduct a full environmental impact assessment of the project, and they’ve convinced the Corps to hold a public meeting on Jan. 12 so residents can voice their concerns.