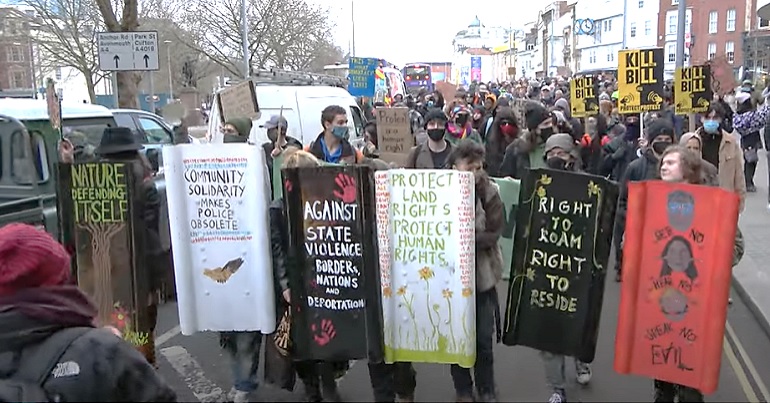 2022’S First Major Nationwide Protests Were To ‘Kill The Bill’

The first major nationwide protests of 2022 erupted on Saturday 15 January.

It saw people out in force up and down the UK as they continued to try and ‘Kill the Bill’.

Home secretary Priti Patel’s authoritarian Police, Crime, Sentencing and Courts Bill (the police bill) has caused uproar. Many see it as racist against Black people and the Gypsy, Roma and Traveller (GRT) community. It will also clamp down on our rights to protest, to roam, and to take strike action. Amnesty International said the bill:

represents an enormous and unprecedented extension of policing powers

2021 was filled with protests over the bill. Some of these were marred by police violence. Courts have sent some protesters from Bristol to prison – possibly the shape of things to come.

Since the Tories first unveiled the police bill, they’ve made several changes to it. It’s now even worse.

So, on 15 January, people hit the streets once more to show their anger over the bill. They were also raising awareness of it.

Kill The Bill Once More

Protests took place in various places: from Leeds to Liverpool, to Bristol and Bath, to Cardiff and Nottingham. The protests also highlighted another nasty, racist piece of Tory legislation: the Nationality and Borders Bill.

⁦@NoRacism_Chezza⁩
Great turnout in Sheffield yesterday. Let’s keep up the pressure and defend the right to protest. #KillTheBill pic.twitter.com/Uw1mAkpUan

People were out in force in Bristol and Bath:

📸 PHOTOS: #KillTheBill protests in Bath and Bristol today as part of the National Day of Action, a last-ditch pushback against the now almost inevitable #PCSCBill. The legal right to protest about to be extinguished in the UK. #PolicingBill

And they were out in Cardiff too:

Today, hundreds took to the streets of Camborne to protest against the #PoliceBill ahead of a vote in House of Lords on Monday. Organised by Cornwall #KillTheBill it began outside George Eustice MP’s office, blocking the road, before marching through town to the police station. pic.twitter.com/lKuKdl71WI

In Bath, film director Ken Loach spoke. He said of the police bill:

It is a truly damaging and dangerous piece of legislation. And it does attack our fundamental rights.

“Demonstrations are entitled to be a nuisance in fact they have a responsibility to be a nuisance because if they are not they will be ignored.” – @KenLoachSixteen pic.twitter.com/hFif7AyWRv

I want us to be strong, and confident, and thoughtful enough to recognise that all over the world, young people have all the hopes, the enthusiasm, the imagination… they have that sense of determination. And they do not want to live in a divided, racist society.

Protest gives people hope, opportunity and the dream of a better world.

My speech at today’s #KillTheBill demonstration in Parliament Square. pic.twitter.com/SARHH9Nj2s

He also took a swipe at the corporate media in the process:

There was cross-party support for the Kill the Bill protests: from Labour and Greens politicians to newer parties like Breakthrough and the Northern Independence Party. Campaign groups also got involved, from Disabled People Against Cuts and Extinction Rebellion to War on Want, CND, Global Justice Now, the Palestinian Solidarity Campaign, and Stand Up to Racism.

The London demo ended up outside Downing Street:

But 15 January’s protests weren’t without the police causing problems. In Manchester, one cop was singled out for violent behaviour:

Legal observers today in Manchester witnessed this GMP officer pushing & striking out at peaceful protestors. He was also involved in the arrest of 3 young people who had left the #killthebill protest. If you have any video footage of this officer pls send it us. #Manchester pic.twitter.com/zYvliaTjHy

Other cops in Manchester were also filmed being heavy-handed:

At the #KillTheBill demo Manchester today. A cop throws a woman to the floor, then he threatens to do it again. What a brave, brave man. Cops are perpetrators of male violence. They don’t need more powers. Fuck the police. #ACAB pic.twitter.com/j8rPwZv11L

They were “protecting” the Winston Churchill statue again. But the cops also got a taste of their own medicine:

Overall, it seemed that most protests went through peacefully. While it also seemed the turnout was good, there is an argument for future protests to be more disruptive. The time for just A-B marches is quickly passing. The UK needs people to make it ungovernable for the Tories. 15 January’s protests were good to see, but walking with banners on a Saturday isn’t going to stop the authoritarian legislation that the government is pushing through. We need more direct action, before the UK’s descent into corporate fascism is complete. The challenge with this is, if the police bill passes any direct action could result in prison sentences for people. So, people need to decide if that’s a price worth paying for our most basic of rights.