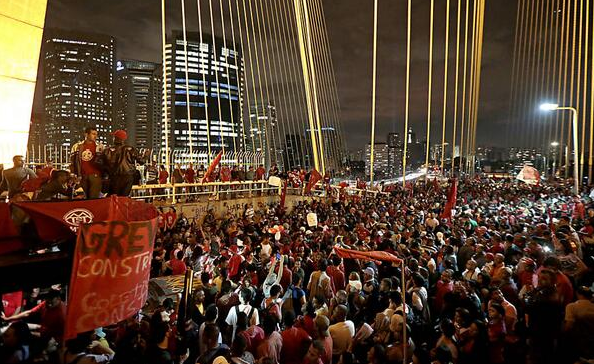 Photo: Folhapress
Around 20,000 people marched today in Sao Paulo in an action organized by the Homeless Workers Movement (MTST) called “Cup Without People, I’m In the Streets Again.” Many different groups joined them, and made it clear that  people are upset at the billions of dollars given to FIFA, construction companies, and the real estate market, while the people of Brazil are left with no homes or hospitals.

“Imagine how many houses you could build with the money for that bridge?” shouted William Boulos of MTST, from the top of a car, which occupies the sound cable-stayed bridge.
Demonstrators showed up in these large numbers despite heavy rainfall, and also despite potential conflicts with fans of a local football team, the Corinthians. Apparently, the organizers spoke to each other and found common ground, avoiding any possible issues. In fact, the entire event had no issues, largely because the police did not provoke the crowds.

The specific demands of  MTST, linked to housing and urban reform, are as follows:
1. Public control of the readjustment of urban rents, establishing the inflationary index as the ceiling of readjustments. This measure is essential to combat real estate speculation which affects the poorest workers.
2. For a federal policy to prevent forced evictions, with the formation of a Monitoring Committee, linked to the Special Secretariat of Human Rights.

3. Changes in the program “My House My Life,” strengthening the sport entities and with rules that encourage better location and better quality operations.

2014 is the year they celebrate 50th year of the military coup of 1964. With struggle we reattained democracy but a lot of dictatorial remains are alive in our country.
The police violence,  especially against black people and the poor, is one of the darkest sign of that time. Now the attack on the right to protest, with new laws and the police, remind us of the sad history of our dictatorship.
The brazilian people have rights to manifest for their rights. Women and men, of all ages, that work so much can’t be afraid of go out to the streets during the cup.
They cannot stop to scream, for “Gol” or house, health and good education in the same country they were born.
Mainly when it’s about a Cup that threw people aside. Evictions, Real estate speculation, repression and abusive public spending – those were the legacy of the Cup for the people.
We will be in streets demanding the rights denied to us always. And we expect that, because of that, the “Cup of cups” doesn’t turn into “cup of troops.
Urban Resistance – National Front of Movements