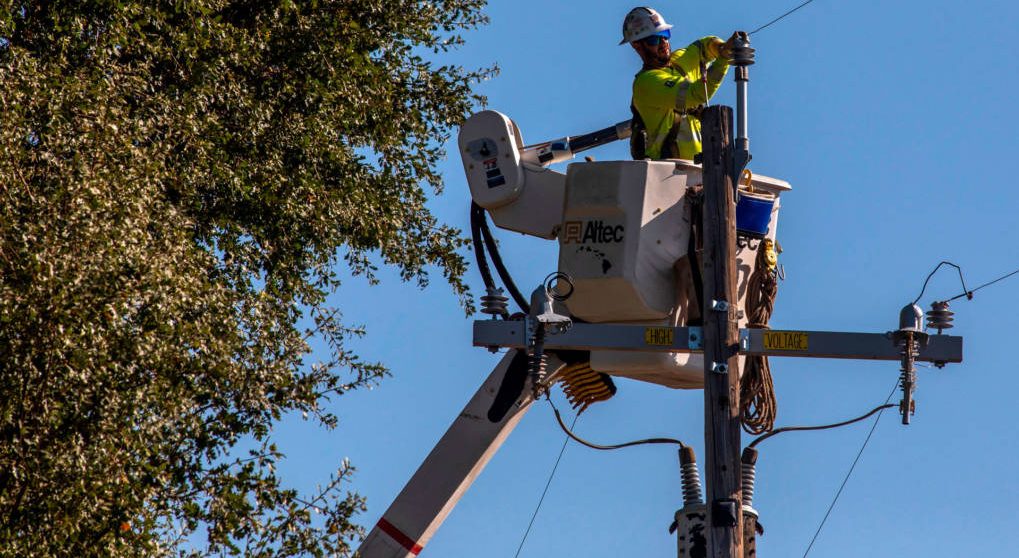 Above photo: A PG&E contractor works on utility poles along Highway 128 near Geyserville on Oct. 31, 2019, as the Kincade Fire continued to burn nearby. Philip Pacheco/Getty Images

California – A coalition of public officials representing 5 million Californians — including 22 mayors — wants to see PG&E emerge from bankruptcy as a customer-owned cooperative. And they’re asking state regulators to help.

In a letter sent Tuesday to the California Public Utilities Commission (CPUC) and Gov. Gavin Newsom, the group of mayors and county supervisors argues that the two factions currently vying for control of the bankrupt utility are made up of “Wall Street titans” concerned only with “a short-term desire to maximize financial gain,” and that a co-op structure would go further toward making PG&E a financially stable company capable of addressing its operational challenges while also regaining the public trust.

The group, led by San Jose Mayor Sam Liccardo, wrote that Californians would be served better by a customer-owned utility that would not have to pay dividends to shareholders or federal taxes.

They noted the recent wildfires and power shutoffs that have plagued communities in PG&E’s massive service area.

“A cooperative financial structure will save ratepayers many billions of dollars in financing costs over this next decade,” the letter states. “A customer-owned PG&E will better focus its scarce dollars on long-neglected maintenance, repairs and capital upgrade, and mitigating some part of the substantial upward pressure on rates.”

While a federal bankruptcy judge will have the final say on PG&E’s future, the CPUC has a significant role to play.

The state regulatory body must vote to approve any final reorganization plan submitted in bankruptcy court, and the commission will also decide if PG&E is eligible for a new state-backed wildfire insurance fund seen as key to ensuring the utility’s future solvency.

The letter comes as PG&E executives and investors meet with Gov. Gavin Newsom Tuesday about the company’s future.

On Friday, Newsom said the state is taking an active role in the bankruptcy restructuring and warned California could take over the troubled utility if an acceptable resolution isn’t reached quickly.