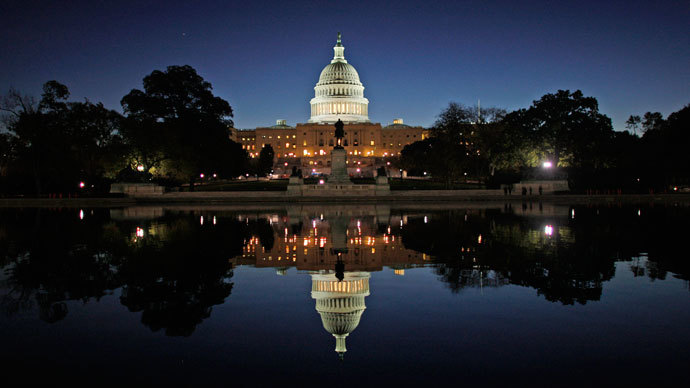 At approximately 1:07 p.m. on Saturday afternoon, April 11, during the annual Cherry Blossom Festival celebrating springtime in the Nation’s Capitol, a 22-year old man took his own life with a gun on the Capitol grounds with a protest sign taped to his hand. According to the Washington Post, the sign read: “Tax the one percent.”

Yesterday, the Metropolitan Police Department released the young man’s name. He was Leo P. Thornton of Lincolnwood, Illinois. Based on what is currently known, the young man had traveled to Washington, D.C. for the express purpose of making a political statement with his sign and then ending his young life.

The Chicago Tribune reported that “Thornton’s parents filed a missing persons report on the morning of April 11 after he never came home from work on April 10, Lincolnwood Deputy Police Chief John Walsh said.”

Those are the tragic facts of the incident itself. But there is a broader tragedy: the vacuous handling of this story by corporate media. The Washington Post headlined the story with this: “Rhythms of Washington Return after Illinois Man’s Suicide Outside Capitol.” The message he delivered to his Congress – tax the one percent – has yet to be explored by any major news outlet in America in connection with this tragedy.

Was the message of Leo P. Thornton of Lincolnwood, Illinois a critical piece of information for this Congress to hear at this moment in American history. You’re damn right it was. Outside of Wall Street’s wealth transfer system, provisions in the U.S. tax code are the second biggest wealth transfer system to the one percent. Together, these two systems have created the greatest income and wealth inequality since the economic collapse in the Great Depression. They threaten a repeat of the 2008 financial collapse because the majority of Americans do not have the wages or savings to support the broader economy.

President Obama clearly understands what is going on. Whether he can get Congress to act is quite another matter. In his January 20, 2015 State of the Union speech, Obama stated:

“…let’s close the loopholes that lead to inequality by allowing the top one percent to avoid paying taxes on their accumulated wealth. We can use that money to help more families pay for childcare and send their kids to college. We need a tax code that truly helps working Americans trying to get a leg up in the new economy, and we can achieve that together. We can achieve it together.”

The President was talking about one of the two biggest tax giveaways to perpetuate the one percent in America – the “step up in basis” at death. Having previously advised regular working folks on investments for 21 years, I can assure you that the majority of Americans have never heard of this giveaway to the rich which has been in effect for decades.

Here’s how it works: let’s say you bought 1000 shares of stock in 1950 for $20,000 and those shares have now grown to $2 million. If you sold the stock now you would owe long-term capital gains taxes at a rate as high as 23.8 percent (the 20 percent top rate on long-term capital gains plus a surtax of 3.8 percent which is levied on higher incomes). But if you hold that asset to your death, it will get stepped-up to the date of death value, effectively wiping out any capital gains taxes that are due for your heirs on this asset. The asset will be included in your estate at its current market value but under current law, each individual can exclude $5.43 million from Federal estate taxes.

Hundreds of billions of dollars in capital gains avoid being taxed each year under this perk for the super rich. It is, after all, the super rich who own the majority of stocks in this country. (You can read the President’s full Fact Sheet on making the tax code more fair here.)

Leo P. Thornton failed to get the attention of the corporate media with the sign he taped to his hand but he may have channeled his thoughts to Dean Baker of the Centre for Economic Policy Research (CEPR). Yesterday, the same day that Thornton’s name was released to the public, Baker wrote a detailed article on another tax perk that is minting billionaires all over Wall Street – the so-called “carried interest” tax perk.

Hedge funds, venture capital and private equity firms, all use the “carried interest” maneuver to avoid paying taxes at the rate paid by the middle class wage earner. Baker writes as follows:

“The reason most of us have seen little gain from economic growth over the last three decades is that the rich have rigged the rules to ensure that money flows upward. Through their control of trade policy, Federal Reserve Board policy, and other key levers of government, they have structured the market to weaken the bargaining power of ordinary workers and benefit the CEOs and Wall Street crew. As a result, the typical worker has seen almost none of the gains from economic growth over the last four decades…

“Many issues in tax law are complicated; the fund managers’ tax break is not. It’s just a good old-fashioned rip-off of ordinary taxpayers for the benefit of the wealthy. The basic point is very simple. The fund managers’ tax break allows managers of hedge funds, private equity funds, and various other investment funds to have much of their pay taxed at the capital gains tax rate rather than the tax rate applied to wage income.

“At present, this will typically mean a savings of almost 20 percentage points since the capital gains tax rate for the rich is 20 percent, compared to a 39.6 percent tax rate on ordinary wage income. The people who benefit from this tax break include some of the richest people in the country…”

“The fund managers’ tax break is real money for the people affected. In the case of a fund manager looking at $100 million in carried interest income, the tax break will mean an additional $20 million in their pockets…

“Surely it is possible to envision a less corrupt Congress that doesn’t make up tax rules exclusively to benefit the very rich. It is also difficult to see how the economy benefits from creating tax loopholes that cause people to spend their time gaming the tax code rather than doing productive work.”

Today, the infrastructure of the United States is in decay. Students are struggling under $1.2 trillion of student debt. In 2014 the Federal Reserve released a study showing that 52 percent of Americans would not be able to raise $400 in an emergency by tapping their checking, savings or borrowing on a credit card, which they would then be able to pay off when the next statement arrived. But Wall Street CEOs and hedge fund managers are still partying and raking in obscene compensation like there is broad-based prosperity in America. And on top of that, they’re enjoying obscene tax loopholes.

If a 22-year old falls in the Capitol and no one hears his message, did he die in vain? We urge everyone reading this to write your own obituary for this young man and his message and share it on your social media site.