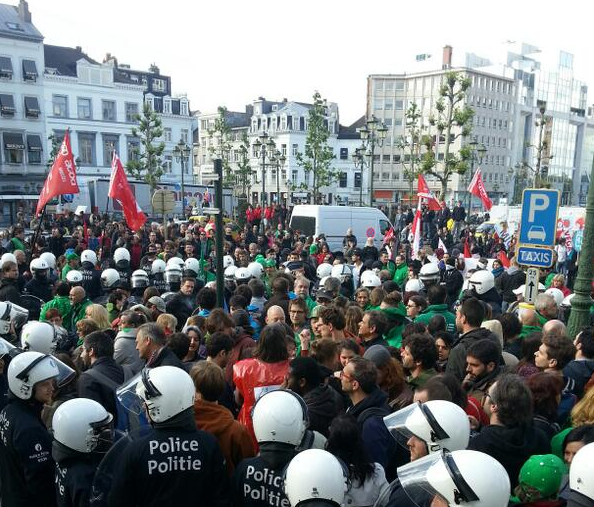 About 500 activists D1-20 Alliance, which brings together farmers, citizens, workers, unemployed or artists gathered Thursday morning in the center of Brussels. They marched to the Egmont Palace, home of the European Business Summit, via the Boulevard de Waterloo, hoping to block the summit.

The police, backed by riot police, surrounded the protesters and made arrests. The police also used water-cannons. A total of 240 protesters were arrested administratively, said the spokesman of the police zone Brussels Capital Ixelles, Christian De Coninck. The mayors of the municipalities of Ixelles in Brussels had allowed a procession on the corner of Place Poelaert and Place du Luxembourg. The agreement was also signed with the CSPF and the CNE. The demonstrators did not comply with this agreement, however, as some of them tried to encircle the Egmont Palace where the summit was held, said Christian De Coninck. Those arrested Thursday morning will be released sometime in the afternoon.

“The transatlantic treaty empowers multinationals and rich at the expense of social and environmental rights of citizens” , denounced the secretary general of the CNE, Felipe van Keirsbilck, during a press briefing held up Poelaart after dispersion of the event. Felipe van Keirsbilck denounced“unknown secret negotiations without citizens” . He believes that they “must be disclosed to the public because the results of these negotiations will be very damaging” . “This treaty is expected to generate millions of jobs, but it is false. (…) The treaty is expected to improve trade between the U.S. and Europe while there are currently already very low tariff barriers between them. The reality is that we want to destroy the non-tariff barriers, that is to say, the regulations, or what they see as a barrier to trade. “

The programs of austerity and privatizations imposed by the Troika decide on the lives of millions of people in Europe. Together with people in Europe and the whole world we resist the rehabilitation of capitalism on the backs of employees as well as unemployed, retirees, migrants and the youth. Together with them we say: “We don’t owe, we won’t pay!”

While the European Union crisis regime builds more and more borders in order to divide, exploit and oppress us, new transnational movements are arising. We are social movement activists, altermondialists, migrants, precarious and industry workers, party members and unionists and many more, who want to connect our struggles and powers beyond nation-state lines. During the week before the elections for the European Parliament we call for the spirit of the multitude of these social movements to build real democracy from below.

We call for an international week of decentralised actions from May 15-25, 2014. Be part of it!

Starting on the symbolic date of the 15M movement in Spain, we aim for strong, united, internationally visible actions from May 15-18.

Beyond these days there will be actions in many cities in many countries linked to one another by the broader perspective of a transnational movement for democracy, solidarity and commons.

Then, in autumn, we will bundle our strength again – this time to prevent the new tower of the European Central Bank from opening in Frankfurt. We invite you to join the action days! Be creative and participate with own initiative!

Trade negotiators from the United States and Europe will be gathering just outside Washington, DC this month to push forward the next big trade deal, the Transatlantic Free Trade Agreement (TAFTA) – also known as TTIP. From the safety standards on which we rely daily for our food, medicines and cars to the energy and climate policies needed to save our planet to the new financial regulations designed to prevent banks from gambling with our money and creating another crisis – safeguards increase our quality of life. Yet today these vital public protections are at stake.

On May 21st, EU and US negotiators will host a forum to hear from ‘stakeholders’ – gather with us outside this forum to tell USTR to SAVE OUR SAFEGUARDS, EXPOSE TAFTA.