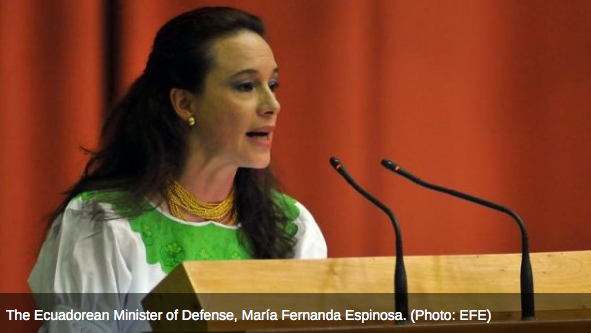 264 Military Buildings To Become Parks Or Hospitals In Ecuador

Ecuador will reduce its military by 51 percent over the next ten years.

Ecuadorean defense minister, Maria Fernanda Espinosa announced on Wednesday that the army´s 516 units will be reduced to 252, reported El Telegrafo.

The measure aims to optimize Ecuador´s military presence nationally. “We know now what we have, how to maintain it, and what we need,” she explained to the press.

She clarified that this will affect the three branches of the army and at least 600 hectares of urban spaces will be made available by 2025. This space is in addition to the 30,000 hectares of rural spaces already delivered by the army to the Ministry of Agriculture and Environment for protection.

Inmobiliar, the government institution in charge of managing public land, will assess and determine the future use of the lands. They could be converted into parks, or used for new schools, hospitals, centres for children, or community police units, but will not be for private use or real estate.

In the south of Quito, the army base will be used for the presidency and other ministries.

In the north of the country, close to the Colombian border, the number of recently created units will stay the same, no matter the outcome of the peace negotiations between Colombia and guerilla groups in Havana.

Nevertheless, at a national level, the numbers of soldiers will be lowered to 34,500 men and women, said Espinosa. She  said the figure wouldn’t be obtained through dismissals, but rather by limiting the numbers of students in training schools.

The measure will cost US$219 million, which will mostly go towards improving existing infrastructure, especially, the minister said, for the housing and health of soldiers and their families.