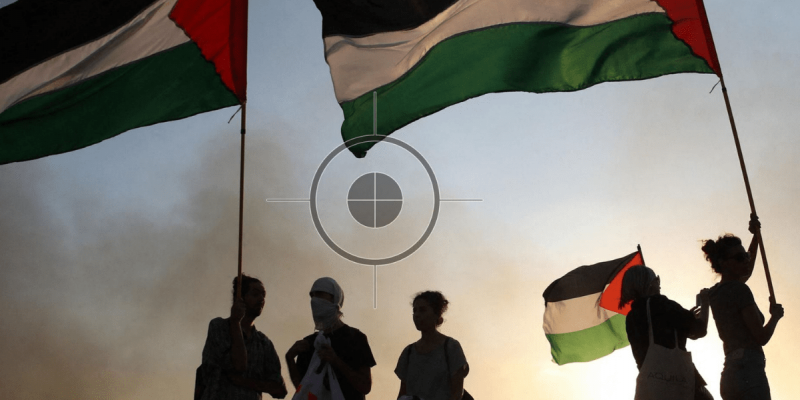 The six organizations targeted by Israel, which the letter describes “as part of the bedrock of Palestinian civil society,” are Defense for Children International – Palestine, Al-Haq, Addameer, Bisan Center for Research and Development, Union of Agricultural Work Committees, and Union of Palestinian Women’s Committees.

These human rights organizations now face possible mass arrest and being shut down by the Israeli government, and anyone identifying with the groups can also be subject to imprisonment, according to Israel’s draconian 2016 counterterrorism law. In a show of overwhelming international solidarity, the letter released today, which was initiated by Jewish Voice for Peace Action, US Campaign for Palestinian Rights (USCPR), Adalah Justice Project, and the Center for Constitutional Rights, attracted a broad and diverse group of signatories, including Amnesty USA, Human Rights Watch, Oxfam America, the Movement for Black Lives, Dissenters, Detention Watch Network, and the Sunrise Movement.“Israel’s authoritarian attack on these six leading Palestinian human rights organizations is designed to stop their work exposing Israel’s government for what it is: a separate-and-unequal apartheid regime engaging in ongoing settler colonial violence against the Palestinian people,” said Ahmad Abuznaid, Executive Director of USCPR. “We must speak up in solidarity with these incredible organizations that tirelessly work every single day on the ground towards Palestinian human rights and a liberated future.”

The letter points out that smearing human rights activists as terrorists is a favored tactic of oppressive governments; and cites a statement by Human Rights Watch and Amnesty International pointing out that this latest move is, in fact, an escalation of Israel’s perpetual assault on Palestinian civil society that is enabled by the lack of international accountability for its grave and repeated human rights abuses.

“The Israeli government is openly attacking prominent Palestinian human rights organizations and threatening human rights defenders with mass arrest,” said Stefanie Fox, Executive Director of Jewish Voice for Peace Action. “Why? Because for decades, the Israeli apartheid government has faced little to no accountability for its repressive actions. This powerful letter signed by hundreds of civil society organizations shows that the grassroots will no longer allow it. We are standing up and demanding that the Biden administration stop ignoring Israel’s authoritarian attacks on Palestinians.”

The letter joins similar efforts taken around the world, led by human rights and humanitarian organizations, trade unions, activists, and scholars. This week, an envoy from the Israeli government reportedly met with Biden administration officials to brief them on this designation. While the State Department stated it was not told of the crackdown in advance, the brazenness of the move by Israel, and the powerful response by individuals and organizations standing in solidarity with Palestine, leaves open the possibility that the Biden administration will be forced to stand against it.

“The tide has turned,” said Nadia Ben-Youssef, Advocacy Director of the Center for Constitutional Rights. “This groundswell of public support is a testament to the righteous Palestinian struggle for self-determination and freedom, which resonates across communities and has for decades been led by the principled human rights defenders the Israeli government is so intent on criminalizing. We are immensely proud to be in this struggle with our Palestinian partners, and demand immediate action by the Biden administration to ensure that they can continue their vital work toward dignity and justice for all.”

The letter, sent to Secretary of State Antony Blinken today, expresses solidarity with Palestinians, whose fight for liberation, it says, is linked to movements for social justice across the world: “While our government has long offered unconditional support to the Israeli government, our movements and organizations will always stand first and foremost with the rights and safety of people.”

Read the letter and the full list of signatories here.