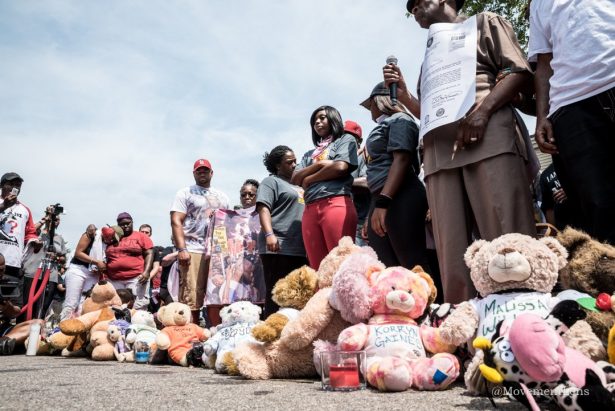 Above Photo: A memorial of teddy bears for those killed by police on the second anniversary of the killing of Michael Brown in Ferguson, Missouri. (Twitter/Movement Lens)

…More Organized Than Ever

The two-year anniversary of the death of Michael Brown came yesterday, August 9, prompting vigils and marches around the country. While the rage and grief that ignited the streets of Ferguson two years ago remained a clear subtext in these gatherings, events surrounding the anniversary of Brown’s death also demonstrated the levels of pragmatism and coordination that have emerged among organizers since the chaotic summer of 2014.

The weeks leading up to August 9 have been busy for Black Lives Matter and its allies. Organizers mounted several major occupations in the past month, beginning with #DecolonizeLACityHall on July 12. In Chicago, activists were in their 19th day of occupying “Freedom Square” yesterday when they paused to honor Brown’s memory with a moment of silence followed by a march. These activists, who include Black Lives Matter members and groups like Let Us Breathe Collective and the Black Youth Project 100, have also taken to the streets in Chicago recently in response to the death of Paul O’Neal and to protest a proposed “Blue Lives Matter” ordinance.

In New York City, activists associated with Black Lives Matter launched a campaign called #ShutDownCityHallNYC on August 1 to draw attention to their demands for police reform, which include the resignation of NYPD Commissioner Bill Bratton, reparations for victims of police violence and defunding the police and reinvestment in the community. A day later, Bratton announced his resignation. (Mayor de Blasio claimed the decision was “110 percent unrelated” to the Black Lives Matter protests.) A rally in honor of Brown’s memory is also slated to be held August 13 in New York’s Union Square.

In Ferguson itself, commemorative events began last week and included a “Walk for Justice” and other events sponsored by the organization founded in Michael Brown’s memory, Chosen for Change. On Tuesday, several hundred supporters gathered for a daytime vigil in honor of Brown’s memory. That evening, as about 75 supporters dispersed from a memorial church service, a passing car struck a member of the crowd, then sped away. Witnesses reported hearing gunshots fired in the wake of the collision. According to a city spokesperson, the incident appears to have been an accident; two people were taken to a nearby hospital.

The past few weeks have been busy for the Movement for Black Lives as well. On August 1, the group, along with a coalition of over 60 affiliated organizations, put forward a detailed platform of demands and policy proposals. Yesterday, the Black Lives Matter organization issued a public call for a four-and-a-half minute “moment of silence” to recall the four-and-a-half hours Brown’s body was left exposed in the street.

Across the board, activists continue to highlight the need for further, radical change. Yet some used yesterday’s milestone as a moment to reflect on how far the movement has come in the past two years. “Ferguson would prove to be the catalyst for Black Lives Matter moving from being a #hashtag movement to a tangible one in the streets of America,” Lawrence Ross wrote yesterday in The Root. This summer’s actions and the evolving, strategic leadership of the movement would appear to support this. Ross continued, “as it has matured, the potential for it to become the most powerful mass movement for racial justice in the 21st century is real … And that’s probably Mike Brown’s greatest legacy: that his death helped empower a Black Lives Matter movement that will eventually prevent future Mike Browns.”