Above Photo: Freda Huson speaking to supporters outside the Prince George courthouse before a hearing last week regarding the injunction application made by Coastal GasLink. (Chantelle Bellrichard/CBC)

B.C. judge granted a temporary injunction for access by Coastal GasLink on Friday

A second checkpoint has been put up on a remote B.C. forestry road to block construction of the Coastal GasLink pipeline, days after a court ordered that the first one must stop preventing the company from accessing the road and a bridge.

An interim injunction order from a B.C. court last Friday ordered the individuals at the Unist’ot’en camp, a self-described re-occupation of Wet’suwet’en land, to stop impeding Coastal GasLink from gaining access to the logging road and bridge it argues is on a critical path it needs to access as part of pipeline construction.

In the injunction, those at the Unist’ot’en camp were given 72 hours to remove physical barriers on the bridge so contractors and employees of Coastal GasLink, a subsidiary of Calgary-based TransCanada Corp., could have access to worksites.

But days after that injunction deadline took effect, instead of granting the company access, a new checkpoint has been established, by another group from the Wet’suwet’en, about 20 km away on the same logging road. 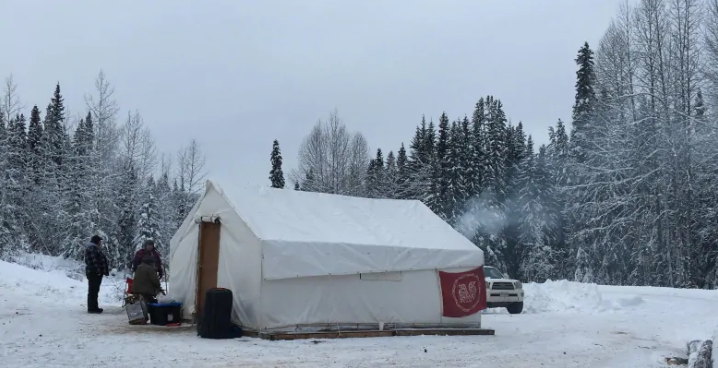 The new checkpoint is located on the Morice Lake Forest Service Road, in the traditional territory of the Gitdumt’en Clan of the Wet’suwet’en. (Supplied)

In court, the company’s legal team told the judge that all the necessary permits and authorizations have been secured to do pre-construction work. Pipeline construction is scheduled to begin in the new year.

The lawyers stated that getting pre-construction work underway is urgent and needs to happen “as soon as possible” in order to meet scheduled construction timelines.

In applying for the injunction, Coastal GasLink named two individuals: Freda Huson and her partner Warner Naziel, though the now-approved interim injunction applies to anyone who is preventing access to the service road and bridge.

Huson has long been the spokesperson for the Unist’ot’en camp, which was established in about 2010 and is located 66 km down a forest service road south of Houston, B.C.

Her partner, Naziel, is commonly referred to by his chief’s name Smogelgem. He is the Likhats’amiyu chief of the Sun House, one of 13 house groups of the Wet’suwet’en.

The Coastal GasLink court documents refer to the pair as the “Blockaders.” They also said the company has made agreements with all of the First Nation band governments along the route of the pipeline.

In a news release from the First Nations LNG Alliance, former elected Wet’suwet’en chief Karen Ogen-Toews said there needs to be unity between the elected and hereditary leadership so they can work together toward common goals.

“Our people need both the hereditary chiefs and elected chiefs to work together for the people… I pray and hope that we can come together as one people and work together so our people can prosper,” she said.

In the Prince George courthouse last Thursday, dozens of Wet’suwet’en hereditary chiefs, matriarchs and Unist’ot’en supporters sat together to listen to the submissions made before the judge.

The hereditary leadership of the Wet’suwet’en are familiar with spending time in courts. They were parties to the landmark Delgamuukw case where the Supreme Court of Canada confirmed that Wet’suwet’en rights and title to the nation’s 22,000 square km of traditional territory had never been extinguished.

A Coastal GasLink spokesperson said the company has been consulting with hereditary leadership of the Wet’suwet’en for years about the project and said not all hereditary chiefs are opposed to the project.

A release put out Wednesday from the new checkpoint group said “the house chiefs of all five Wet’suwet’en clans agreed by consensus to assert control of the Gitdumden territory,” meaning only those who have consent from the group will be allowed access through the checkpoint and into the territory.

There is disagreement over whether the new checkpoint is subject to the interim injunction granted last week. In the eyes of Coastal GasLink, it is.

The company’s legal team applied to the courts on Wednesday to amend the interim injunction so “the order cannot be avoided by simply placing a blockade on a different section of the access route for Coastal GasLink.”

The application for an amendment will be heard in court on Friday in Prince George.