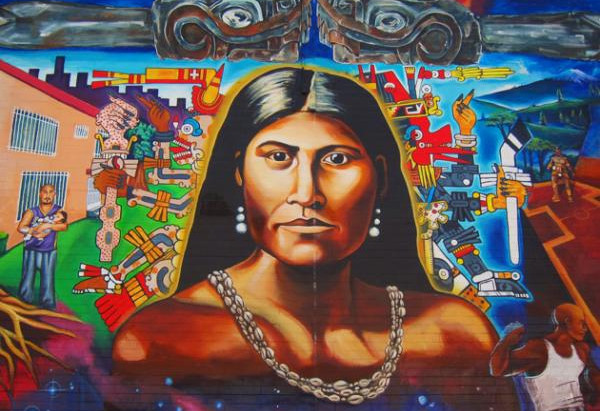 Above Photo: This 60-by-20-foot mural commemorating the life of Toypurina adorns the main wall of Ramona Gardens, a large and well-known public housing complex in East Los Angeles.

None of these Native American women are named Pocahontas or Sacajawea

In the category of “famous Native American women,” everyone has heard of Pocahontas and Sacajawea. Both—but especially Pocahontas—have been turned into some of the worst of today’s stereotypes about Native American women. And in American history they have both been held up as examples of Native American women who facilitated colonization through the help they provided to white settlers. Scholars have gone a long way, however, to portray their histories as far more complex than that.<

Cherokee historians have long celebrated Nancy Ward, known also by her Cherokee name, Nanye-hi. She is known by her designation as Ghigau (which means “most beloved woman” but also “war woman”), a title bestowed upon women of exceptional achievement or merit. Historical narratives tell of her earning the title at the age of 17 after fighting in the battle of Taliwa, taking up the gun of her husband Kingfisher after he was killed in battle. As Ghigau, she sat in council meetings among both the war and peace chiefs.

Although she is perhaps known best for her role in sparing the life of a white female war captive, and according to Laura Donaldson has inaccurately been portrayed as “the Pocahontas of Tennessee,” Nanye-hi was in reality a diplomat of the highest order. In negotiations for the Treaty of Holston in 1781 she famously reminded U.S. treaty commissioners that “…we are your mothers; you are our sons.”

While Nanye-hi was helping the Cherokee negotiate treaties with the U.S., California Indians were under the brutal yoke of the Spanish mission system. The San Gabriel Mission, near today’s Los Angeles, was one of the earliest missions to be established after the first Spanish incursions into Southern California indigenous territories in 1769. Within a few years Indians around today’s San Diego began revolting against the Spanish, and by 1785 the Tongva (also known as Gabrieleno for the San Gabriel Mission) had organized their own resistance movement with the participation of neighboring missions.

In addition to rebelling against the violence of widespread rape, forced labor and conversion, the final straw had been the banning of traditional dances. Toypurina, widely known as a powerful Tongva medicine woman, 25 years old and pregnant at the time, emerged as one of the primary planners of an attack against the mission. After receiving word of the plan, the Spanish launched an ambush, thwarting the revolt. More than a dozen people were publicly lashed in punishment, and Toypurina was exiled to a faraway mission in today’s Carmel.

Toypurina eventually married a Spanish soldier with whom she had three children, and adopted Christianity. Some scholars have argued, however, that her choices could be seen less as a sign of defeat than a survival tactic under extremely difficult circumstances, and she is today an icon of strength and resilience to California Indians.

The colonization of Turtle Island moved like a tidal wave across the continent, affecting some nations far later than others. While Toypurina and her contemporaries were planning their rebellion against the Spanish, the peoples of the Upper Columbia River Plateau region were still living in relative isolation, with little to no contact with the white world. Born a Colville Indian (Swy-ayl-puh, as she spelled it) around 1884—barely more than one decade after the establishment of the Colville reservation—Mourning Dove (her pen name) was a writer who thought of herself as a woman between two worlds. Her first language was Salish, but her Catholic mission school education and later at a business school gave her enough command of the English language to compose manuscripts that would be published into books.

Her first book, Cogewea, The Half-Blood: A Depiction of the Great Montana Cattle Range was published in 1927 and for many years was thought to be the first novel ever published by a Native American woman (until the rediscovery of S. Alice Callahan’s 1891 Wynema: A Child of the Forest). Mourning Dove went on to record the traditional stories of the Colville people in Coyote Stories (1933), and two other books were published posthumously, Tales of the Okanogans (1976, edited by Donald M. Hines), and A Salishan Autobiography (1990, edited by Jay Miller).

Mourning Dove worked much of her life as a migrant laborer, writing late into the night in a tent or cabin after long days in the field, as well as being involved in tribal politics. Her health suffered as a result and she died before she was 50, never having had children.