33rd Anniversary Of Brian Willson Surviving The US Train Assault

Note: Brian Willson has been an important activist against US war and imperialism since his experience in the Vietnam war. His work in the defense of Nicaragua against US aggression began in the Reagan era and continues today. He has a deep understanding of the fraud of white supremacy and the damage that ideology does in the US and around the world.

On September 1, 2020, he received well-deserved honors in Nicaragua. Brian begins to speak 2:19 into this video.

In this important interview, Brian discusses not only Nicaragua but the broader issues of US foreign policy and racially violent police brutality in the United States. He currently lives in Nicaragua and was interviewed by Stephen Sefton of Tortilla con Sal. You can read a transcript of this interview here.

I first came to Nicaragua in 1986 to study Spanish and to learn about Nicaragua’s Revolution.

I came back three more times in 1986 and 1987 to document the criminal conduct of President Reagan’s so-called terrorist “Freedom Fighters”, trained, armed and funded by the US people through their Congress and President. Upon doing research, several of us discovered that most of the weapons – mortars, assault rifles, pistols, land mines, grenades, rockets, small arms ammunition, etc. – coming to El Salvador and Nicaragua, originated from the Concord, California Naval Weapons Station (CNWS). We acquired copies of the shipment orders.

In addition, we gained more information after young Nicaraguan soldiers shot down on October 5, 1986, a US CIA C-123 weapons supply plane with a surface-to-air missile (SAM), twenty miles from the Costa Rican border north of San Carlos, Nicaragua. One of the four crew members, mercenary Eugene Hasenfus from Wisconsin, USA, parachuted to safety before being captured. The three other crew members were killed in the crash. It was Hasenfus’ tenth air supply drop of weapons to awaiting Contra terrorists.  The plane was carrying thirteen thousand pounds of military supplies, including sixty AK-47s, fifty thousand rounds of ammunition, grenades and their launchers, jungle boots, and water packets originating from Brooklyn, New York.  I and two other US military veterans were able to interview Hasenfus for several hours in his Tipitapa prison cell gathering many additional details of the US arms shipments.

The US continued to relentlessly fund the criminal terrorist war against the Nicaraguan people despite it being in violation of both international and US Constitutional law, and a ruling of the World Court. Thousands of people were murdered and maimed. The US Congress and President have never been held to account for these vicious crimes, enjoying virtual immunity. Thus, some of us US citizens chose to act in direct efforts to stop the US murder policy being conducted in all of our names as US citizens. 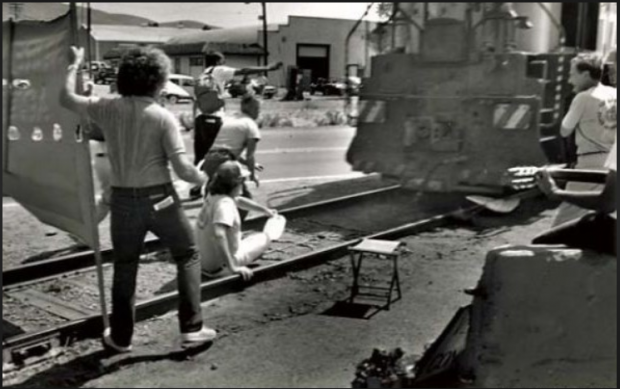 Photo taken just before Brian Willson is struck by train in 1987.

Attack by the US Government Against Protesters Opposing Nicaraguan War

Thirty-three years ago, on a bright sunny day on September 1st, 1987, I went to the Concord, California Naval Weapons Station (the Pentagon’s largest storage arsenal on the US West Coast) at about 11 am, with two other military veterans, along with about 50 supporting witnesses.  We took our positions to begin our permanent human blockade ON the Station’s railroad tracks.  Every day, locomotives hauled boxcars full of various armaments from the interior storage bunkers carried on three miles of tracks to be loaded on ships in the Sacramento River. Destination: To murder peasants in El Salvador and Nicaragua, 3,500 miles further south.

This US Navy base had a history of citizen civil disobedience. It had been used during the unpopular US War against Viet Nam sending armaments to Asia where many civil blockades had attempted to interfere with the movement of those weapons. There was an official protocol for the military to call the local police to make arrests, before moving the weapons train whose legal speed limit was but 5 mph. We had notified the US military authorities in writing, and in person, several days in advance of September 1, and again on that day, of our plans for beginning our veteran’s blockade.  The large signposted within a few feet of the location of our human blockade warned of the penalties for interfering with the movement of munitions: one year in prison and a $5,000 fine. We expected that sooner or later we would be arrested and imprisoned.

There was a contingent of armed US Marines who protect the base grouped some 30 feet from our position.  And there was mumbling from them about “we hear there is going to be violence today”. We said, “no, we are nonviolent”.

Near High Noon, the first weapons train became visible some 700 feet or so down the tracks. The other two veterans and I took our firm positions between the rail’s two tracks, to wait for our arrests.  I was sitting in a lotus position, the other two were crouched but firmly planted on their feet.  Our many witnesses were observing along the outside of the tracks, including one friend with a video camera who was to document our treatment by police during the arresting process.  As the train came closer and closer, it appeared that it might be accelerating above its 5-mph speed limit, but that seemed extraordinarily unlikely in light of official protocol and violation of security requirements operating this dangerous munitions train.

But, as fate would have it, the train was accelerating, and as it got closer and closer to our human blockade, it was clear it had no intention of stopping.  Our autonomic nervous system urgently responded with adrenalin, and our bodies moved accordingly. One veteran jumped at the last second to the left off the tracks. The second veteran, 67 years old, jumped straight up in the air and grabbed onto the railing above the cowcatcher platform where two trainspotters were standing in phone contact with the operating engineer at the rear of the locomotive. As I had been sitting, I tried to bolt to the right off the tracks but was too late and my body went completely under the locomotive and its trailing boxcars.  The train continued for another 500 feet before it stopped and was surrounded by dozens of armed US Marines.

I spent one month in the hospital recovering from my injuries – double leg amputations below the knee, a fractured skull with the destruction of the right frontal lobe, facial reconstruction including re-attaching severed outer left ear, two broken elbows, broken right wrist, many cracked ribs, broken right shoulder blade, damaged right kidney, and many skin abrasions, including 100 stitches inside my mouth. I left the hospital with two prosthetic legs and a walker.

We learned that the FBI had investigated me and one of the other two veterans as “domestic terrorist suspects” since 1986. A local Sheriff investigation claimed a fear that we were planning to hijack the train, and that the three-man train crew was ordered that day to NOT stop the train. A formal Navy investigation concluded that the train was accelerating to 17 mph, more than three times its legal speed limit.  At the time of impact; that the crew could see us for at least 650 feet, but they never attempted to brake the train, which was what I expected (naturally) per the protocol and legal regulations.  I had no intentions to play chicken with a 200,000-pound locomotive.

The US never apologized, and no local, state or national agency ever brought criminal charges against the navy or its train crew.  After a three-year series of motions and countermotions, a court settlement was reached. 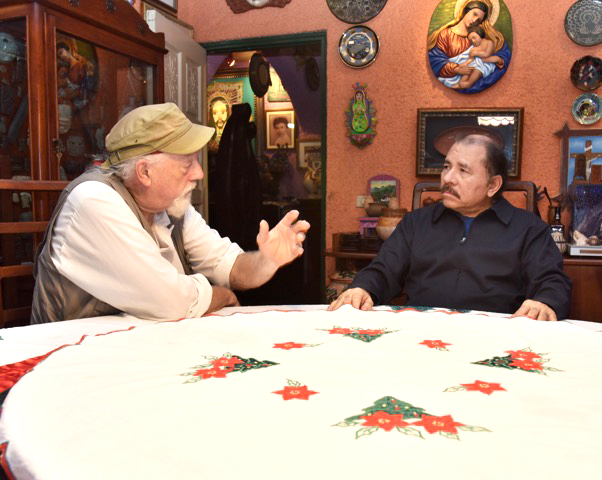 Brian Willson with Daniel Ortega 2016 from The 2016 Presidential Elections:
A Report From Nicaragua by Brian Willson.

Examining US State Department, NDI (National Democratic Institute) and USAID (US Agency for International Development) and NED (National Endowment for Democracy) communications from 2010 to 2018, it is clear that the US has been preparing for an illegal change of government before, but no later than, the 2021 elections. Their extensive and continuous communications reveal:

* “final goals” of “regime change” to a government “akin to the interest of the US government”;

* “promote mobilizations against the government of Daniel Ortega”;

* “the US government, through its Embassy and the USAID have been preparing the conditions to carry out a non-violent coup d’etat against the Nicaraguan government”;

* “create a mass of young people critics of the government”;

* “promote antigovernment awareness in vulnerable sectors of the society”;

* “training young leadership and exerting control over the ‘independent’ means of communication…. looking out on the 2021 elections”;

* “undermining the image of the Nicaraguan government”;

* “strengthening the civil society organizations, the media war and the creation of a platform for young leaders, and, at the same time, guaranteeing an international following”; and

* “training in data journalism and data visualization…to influence on the Nicaraguan public opinion and to create a negative opinion about the Daniel Ortega’s government”, using funds from George Soros’ Open Society Foundations.

On July 31, 2020, we learned that the US has launched a new brazen, criminal, and arrogant plan to overthrow Nicaragua’s government. A well-orchestrated plan financed by the United States to launch a coup d’état in Nicaragua over the next two years was leaked in a document from the US embassy. US official are fearful that President Ortega and the FSLN will win the 2021 scheduled elections.  The document’s title is   RAIN, Responsive Assistance in Nicaragua, and indicates an intention to contract a US company (Blackwater or its successor?) to take charge of carrying out the coup. The plan’s criminal purpose is to “destroy public order” and “do other violent actions” before, during and/or after the 2021 elections.  The funds to implement this plan are or have been allocated through the International Development Agency (AID) which is also the US institution that has provided the most money openly in recent years to the Nicaraguan opposition for coup activities. USAID will fund these destabilizing activities, using local partners: public opinion analysts, media, businesspersons, NGOs, students, and social networks to orchestrate false news reports. USAID provided millions of dollars to fund the 2018 US-attempted coup operators against Nicaragua.

The new coup government must immediately submit to the policies and guidelines established by the United States, including the persecution of Sandinistas, dissolving the National Police and the Army, among other institutions. The document seeks to aggravate the COVID 19 pandemic, which is well under control at present, unlike in the United States, despite US sanctions.   The opposition has already received more than $31 million from the United States between the end of 2017 and May 1, 2020.  The document also details the participation of the US Embassy in Managua, currently under the leadership of US Ambassador Kevin K. Sullivan, who will be in charge of executing a series of diplomatic actions such as the creation of a commission to delegitimize the ousted government while legitimizing the new government imposed by a coup d’état.

Therefore, today, a group of US citizens and Nicaraguans are requesting a meeting with Ambassador Sullivan, to ask him to denounce the RAIN coup plan or any other plan to destabilize the Nicaragua society and government.   We want to also remind him of the laws being violated by current US foreign policy against Nicaragua.  These laws include:

III. 1956 Treaty of Friendship with Nicaragua.