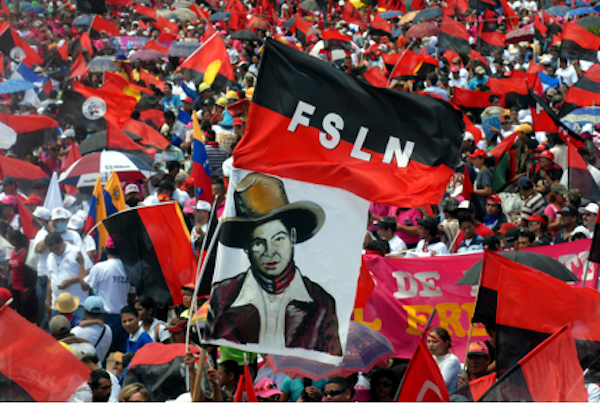 35 Years Since The Triumph Of The Sandinista Revolution

July 19, 2014 marks the 35th anniversary of the triumph of the Sandinista Revolution in Nicaragua. On that day, the Sandinista troops led by the nine commanders of the Sandinista Front for National Liberation (FSLN) entered the capital city of Managua where they were greeted by hundreds of thousands of jubilant Nicaraguans. The triumphant guerrillas found a country in ruins. The previous ruler of the country, dictator Anastasio Somoza Debayle, had bombed the cities during the final offensive. When he fled the country two days earlier, he took not only the caskets containing his parents’ remains, but all the money in the national treasury as well. The Sandinistas were left with no money and a $1.9 billion international debt.

Despite these handicaps, the Sandinistas set up a nine member National Directorate and five member Junta de Reconstrucción as the executive branch, and a Council of State which included political parties and popular organizations as the legislature. They launched an ambitious and revolutionary political program. Their Literacy Crusade reduced illiteracy by 37 percent and was given an award by United Nations Educational, Scientific and Cultural Organization (UNESCO) for its triumphant success. The Sandinistas also provided citizens with free health care, started farm cooperatives, and used land confiscated from Somoza and his close government and military supporters for state-owned farms. The successful “Revolution of Poets,” many of the country’s poets were revolutionaries and politicians, made Nicaraguans proud and the social advances made them hopeful for the future. In 1981 Ronald Reagan took office as president of the United States. The CIA, under his direction, immediately began training former members of Somoza’s brutal National Guard who had escaped across the border to Honduras. The famous CIA manual taught at the School of the Americas and captured after a battle in Nicaragua, showed how they were trained. They were taught to assassinate teachers, health care workers, and peasant cooperative leaders. There was also a “Freedom Fighter Manual” authored by the CIA and airdropped into the country which encouraged Nicaraguans sympathetic to the dictatorship to sabotage the Sandinista government and cause social disorder by employing methods such as bombing police stations.

For nine years, until the 1990 electoral defeat of the Sandinistas, Nicaragua’s dreams of equality and prosperity were stymied by the need to defend their country from the Contras, the US-trained and funded proxy-army. Forty thousand casualties later (added to the 40,000 lost in the war for national liberation), tired of the killing and the effects of the brutal US economic blockade, Nicaraguan voters succumbed to Washington’s relentless and violent meddling and US-backed candidate, Violeta Chamorro. President Daniel Ortega turned over the presidential sash in the first peaceful transfer of power between parties in Nicaragua’s history.

What followed was 17 years of neoliberal hell mandated by the IMF, World Bank, and USAID. Free education and health were eliminated. Public employee jobs were cut to the bone. The backbone of Nicaragua’s economy, peasant farming, was starved for lack of government credit. The result was displaced farmers and desperate families who served to provide cheap labor for foreign sweatshop—whose ideal employees were 15-year-old girls, often the only family member with a job. The US and international financial institutions’ sole priority was punctual payments on international debt, regardless of the punishing effect it would have on the population because of the requisite cuts in social spending needed in order to make them.

By 2006 the Nicaraguan people grew tired of the economic suffering and watching their children die of preventable diseases. They elected Sandinista Daniel Ortega as president with a plurality of 38 percent, even amid threats and fears of a new war with the United States.

Fortunately, that’s not what happened. The world had changed. Latin America had begun to unify and free itself of US hegemony after the election of Venezuelan President Hugo Chavez, while the US was mired in two disastrous wars in Iraq and Afghanistan. This allowed Ortega to begin to rebuild the Sandinista promise of free education and health care, to rebuild the peasant agriculture sector, and to accomplish justice and equality in peace. Now Ortega could continue the work of the revolution without the counter-insurgency campaign and low intensity conflict Washington employed previously to stymie democracy in the Central American nation.

Five years later, when Ortega ran for re-election in 2011 presidential election, he routed the neoliberal opposition winning 63 percent of the vote and a super-majority in the National Assembly. Nicaragua continued to advance socially and economically. It has already achieved many of the UN Millennium Goals for cutting poverty in half. It also has the fastest growing economy in Central America and has moved past Honduras to no longer be the second poorest country in Latin America and the Caribbean.

Today, while child refugees flood the US border from Central America, Nicaragua’s children are not among them because they are in school, their parents have jobs, and the whole family has enough to eat. Drug cartels have been unable to gain a foothold because the army and police are those same muchachos and muchachas who defeated a US-backed dictator and aspired to be New Men and New Women. Nicaraguans are astounded at the corruption and brutality of the security forces of their neighbors.

Vietnam and Nicaragua (and the liberation struggles in El Salvador and Guatemala) were the formative political events of my generation. Thirty-five years later, when I talk about Nicaragua, I see young people’s eyes glaze over the same way mine did when people talked about the Spanish Civil War. But Nicaragua remains important today and we have to teach the truths that they taught us in the 1980s.

When I made my first trip to Nicaragua in 1987 with a Nicaragua Network coffee picking brigade, I learned a number of things. I learned that it was possible not just to oppose my country’s wars, but to support an alternative to war and capitalist exploitation. I learned that patriotism is not a dirty word because Nicaraguans were rightfully proud of the New Nicaragua that they were struggling to build. I learned that Nicaraguan peasants living in the countryside knew more about what was happening in the world than did my friends and neighbors in the United States.

These, and other truths I have learned since made me an organizer for transformational change, a task I am still learning 27 years after I began. For me Nicaragua was a life-changing experience, as it was for many of the estimated 100,000 US citizens who visited Nicaragua in solidarity in the 1980s. We used to say “All Nicaragua is a school.” The composition of refugees crossing our border today demonstrates that that is as true today as it was in the 1980s.

Chuck Kaufman is National Co-Coordinator of the Nicaragua Network/Alliance for Global Justice.