The Des Moines Fire Department had to cut the four protesters from their concrete barriers, said Brian O’Keefe, a spokesman for the department. Firefighters gave the protesters facemasks and other protection from debris as the concrete was being cut, he said.

An organizer for the group of about 20 protesters is Frank Cordaro, a former Catholic priest affiliated with the Catholic Worker House.

Ultimately, Cordaro wants the Air Guard base to stop flying military drones, which he believes are killing innocent women and children overseas.

“We’re asking for attention to a moral issue that’s not being addressed,” he said. Cordaro, 66, has been protesting at the base with a small group regularly since May and has previously been arrested there for trespassing. 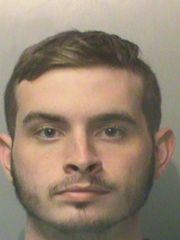 Iowa National Guard spokesman Col. Greg Hapgood said in a statement Tuesday that Guard members “serve proudly to uphold the free expression rights” of protesters, but added that contacting U.S. senators and representatives would be more effective in this case.

“Protesting here does nothing to effect change with respect to the national defense missions,” Hapgood wrote.

It was about 7:30 a.m. when airmen arriving for work and other drivers were stopped by protesters with signs and concrete barriers blocking McKinley Avenue, near the base entrance.

Several cars turned around, but some honked. One driver screamed profanities at the protesters before turning his car around.

Police officers, firefighters, ambulance medics and air guard personnel gathered as the protesters chanted slogans for more than an hour. 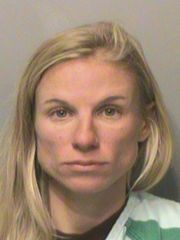 “Hey, hey, ho, ho, these killer drones have got to go,” the group chanted. They held signs that included the phrases “END WAR” and “End drone warfare.”

At about 8:25 a.m., police officers began speaking to individual protesters, saying they were violating the law by blocking the road. Officers also ordered journalists to move away from the immediate area. Police explained to protesters that if they did not voluntarily leave, they would be arrested.

Police and fire officials described the protest as peaceful. Several of the protesters repeatedly said that they are nonviolent and promote peace.

Cordaro said he was grateful for police, firefighters and journalists doing their jobs at the protest — but he wants a response from Des Moines’ religious leaders and other community members, who he says have ignored his concerns about military drones. 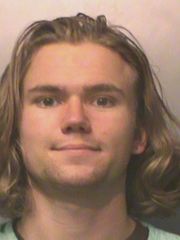 “This is what democracy looks like,” Cordaro said while surrounded by police officers, firefighters and fellow protesters. “If this gets that discussion going, we’ll be happy,”

Alex Cohen, 21, was among the protesters. He wasn’t arrested.

“I’m here because I don’t like war in general,” he said.

The road reopened shortly after 10 a.m.

O’Keefe explained that the protesters had built the concrete barriers by taking large plastic trash bins and cutting holes in the sides, inserting PVC pipe into the holes before adding the concrete, which filled in around the PVC pipe. Protesters then put their arms into the PVC pipe, he said. 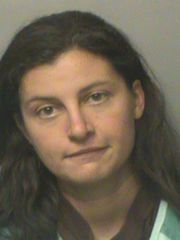 Firefighters safely cut the concrete away from the protesters’ arms, O’Keefe said. No one was hurt.

The 132nd Wing of the Iowa Air National Guard moved from F-16 aircraft to a remotely piloted aircraft in October 2013, Hapgood said. The unit remotely operates MQ-9 Reaper aircraft overseas from the Des Moines airbase, he said, adding that “the vast majority” of flight missions are focused on gathering intelligence and imagery about enemies