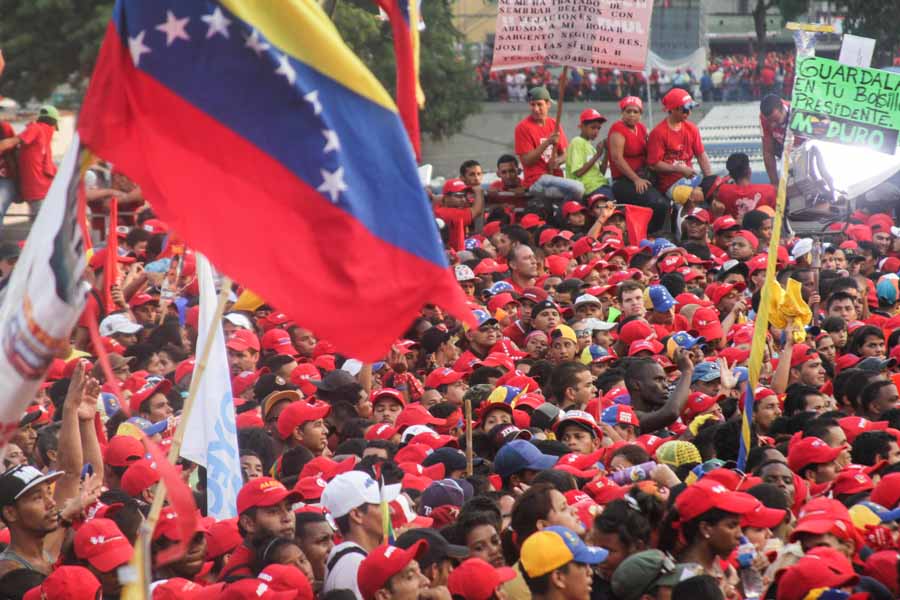 But since taking office in 2013, Maduro and the Bolivarian Revolution have faced non-stop attacks from Venezuela’s U.S.-backed right-wing opposition, making advancements difficult. Improving upon destabilization tactics used during Chavez’s administration, the opposition, it seems, has perfected the art of sabotage.

Mainstream media, falsely portraying the opposition as a peace-loving democratic movement, has used textbook examples of psychological projection to create a false narrative about Venezuela.

Under his administration, Venezuela expanded its free health care coverage to more than 60 percent of the population, according to the country’s Ministry of People’s Power for Health. The Venezuelan president has also made free health care available to people in historically impoverished departments like Amazonas, Bolivar and Delta Amacuro.

And last March, Maduro’s government announced a decree that increased salaries for all doctors working in the public health sector by 50 percent. The salary increase served to incentivize medical professionals to provide the best quality of treatment for patients.

The results of his investments in public healthcare are undeniable.

Earlier this year, the United Nations Program for Development placed Venezuela among the countries with the highest Human Development Index, surpassing most Latin American countries. Since 2013, Venezuela has also decreased infant mortality rates, heart disease HIV/AIDS rates, according to the World Health Organization.

Public housing for all Venezuelans has also been a mantra of Maduro’s administration.

Last January, he announced that his government reached its goal of delivering 1,400,000 homes to Venezuelans across the country. The public housing program is either free or low of cost, depending on the family’s means. The project aimed to involve Venezuelans in the process as much as possible, with homeowners responsible for 60 percent of town planning.

Since January, the Housing and Habitat Ministry has constructed thousands more public housing units in remote regions across the country.

Maduro, who actively supported Venezuela’s student movement against neoliberalism during the 1980s, has made important strides in public education since coming to power.

The Venezuelan president has significantly grown the country’s Canaima program, a computer literacy and technology education campaign established by Chavez in 2009. Maduro’s administration has provided more than 4,800,000 computers and over 100 million technology textbooks to students across the country.

Despite the country’s economic difficulties over the last three years, more than 20,000 schools have received new computer equipment.

Maduro has also pumped millions into free transportation, music, art, sports and culture programs at schools across the country.

Maduro’s progressive education policies have made Venezuela rank sixth in the world in terms of enrollment in primary education and has increased its coverage of secondary education to 73 percent of the population. His policies have also made Venezuela a country with the highest literacy rates in Latin America, with 95.4 percent of the population knowing how to read and write, the U.N. reports.

Maduro has also made tremendous advancements in improving the representation and civil rights of historically oppressed sectors of Venezuelan society, like women, Afro-Indigenous people and the LGBTQ community. Here are some examples.

Since 2013, Maduro has boosted funds for the Venezuelan Ministry for Women and Gender Equality, which provides resources such as child care, medical attention, job training and political education. And in 2014, he appointed Delcy Rodriguez, a politician and active member of Venezuela’s feminist movement, to head the country’s Ministry of Foreign Affairs.

Along with elevating members of Venezuela’s Black and Indigenous-descendant communities to important political positions, he has also created institutions like the Centre of African Knowledge and the Ministry of Popular Power for Indigenous Peoples.

Moreover, Maduro’s administration has also improved rights for LGBTQ people. In 2016, Venezuela’s Supreme Court declared that the state will provide protection without distinction to all families, including to children born into same-sex families. In the same year, Venezuela’s Public Ministry announced that transgender people may request a new identity card according to their gender identity.

Although many improvements for women, Afro-Indigenous people and the LGBTQ community remain to be carried out, Maduro’s improvement of civil rights in the country is undeniable.