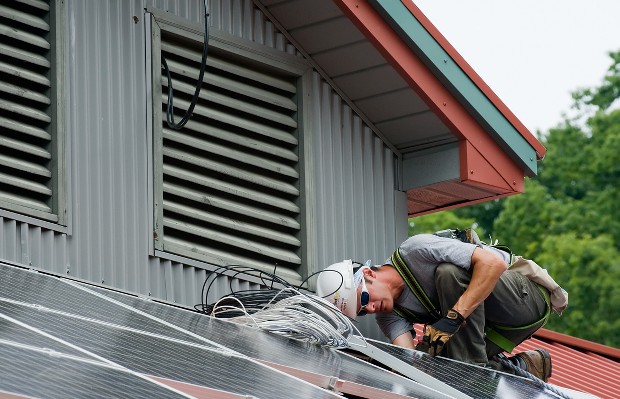 40% Of U.S. Electricity Could Come From Rooftop Solar

Above Photo: From care2.com

With rooftop solar arrays becoming more common, the Department of Energy decided to do some exploring to quantify exactly how much energy Americans could generate if they installed photovoltaic systems efficiently and extensively.

What they found was startling: The country could meet 39 percent of its energy needs through rooftop photovoltaics, and, surprisingly, small structures like private homes are likely to return the best results.

In a country still struggling for energy independence and looking for ways to reduce its carbon footprint, this is big news. The next step is to make it happen.

Researchers at the National Renewable Energy Laboratory took a look at data from 128 cities — accounting for almost a quarter of the buildings in the U.S. — and evaluated them for solar potential with the use of tools like light detection and ranging (LiDAR) to determine their energy potential.

They found that solar arrays could generate 1,432 terawatt hours of electricity annually if systems were installed correctly and efficiently.

Depending on where you live, you can even crunch the numbers for your own home using Google’s Project Sunroof, which uses your address to gather data about prevailing conditions and determine how much power you could generate. Compare your utility bill against the results to see if you could meet all or part of your energy needs — or even exceed them, allowing you to feed power back into the grid.

Solar energy is growing increasingly popular, and it’s definitely not an alternative energy outlier anymore. The government is heavily invested in making it more accessible through measures like the Rooftop Solar Challenge, a push to address affordability and other barriers to installation.

In addition to addressing affordability with investments and incentives, the government also helps with permitting and zoning, utility policies and other issues that can intersect with making rooftop solar accessible. They’re rolling out the program in major cities where it will have the most immediate impact, but the lessons learned will be valuable for small communities as well.

Photovoltaic arrays are indisputably becoming more affordable, which is a good sign. Typically, the more people adopt a product, the further down the price goes, as companies can invest in mass production and development that ultimately saves money across the board — just like buying in bulk is cheaper than picking up packaged versions of the same foods.

Such planning can include the use of financial and social incentives to encourage developers and homeowners to think solar from the start, and over time, solar could meet more and more of our energy needs — the study points out that it doesn’t even account for ground-based arrays, which would also cut down on the use of non-renewable sources.

Solar power offers a lot of advantages over other forms of electricity generation, including the fact that it can be relatively unobtrusive, a concern in some communities. Critics sometimes argue that both wind and wave power are disruptive because they’re not attractive, posing a serious barrier to widespread installation and maintenance of such systems.

Solar can quietly generate energy on roofs across the country, while large arrays can be replaced in more remote areas with ample sunlight to generate energy without altering views. Being realistic about the aesthetic shortcomings of some alternative energy generation tools is important, as people displeased with the look of things like windmills can raise substantial opposition and create unnecessary red tape that may delay installation for months or even years.

Solar, on the other hand, is easy and straightforward — and this study shows how advantageous it is as a frontrunner in the fight to drop coal and other polluting power sources.