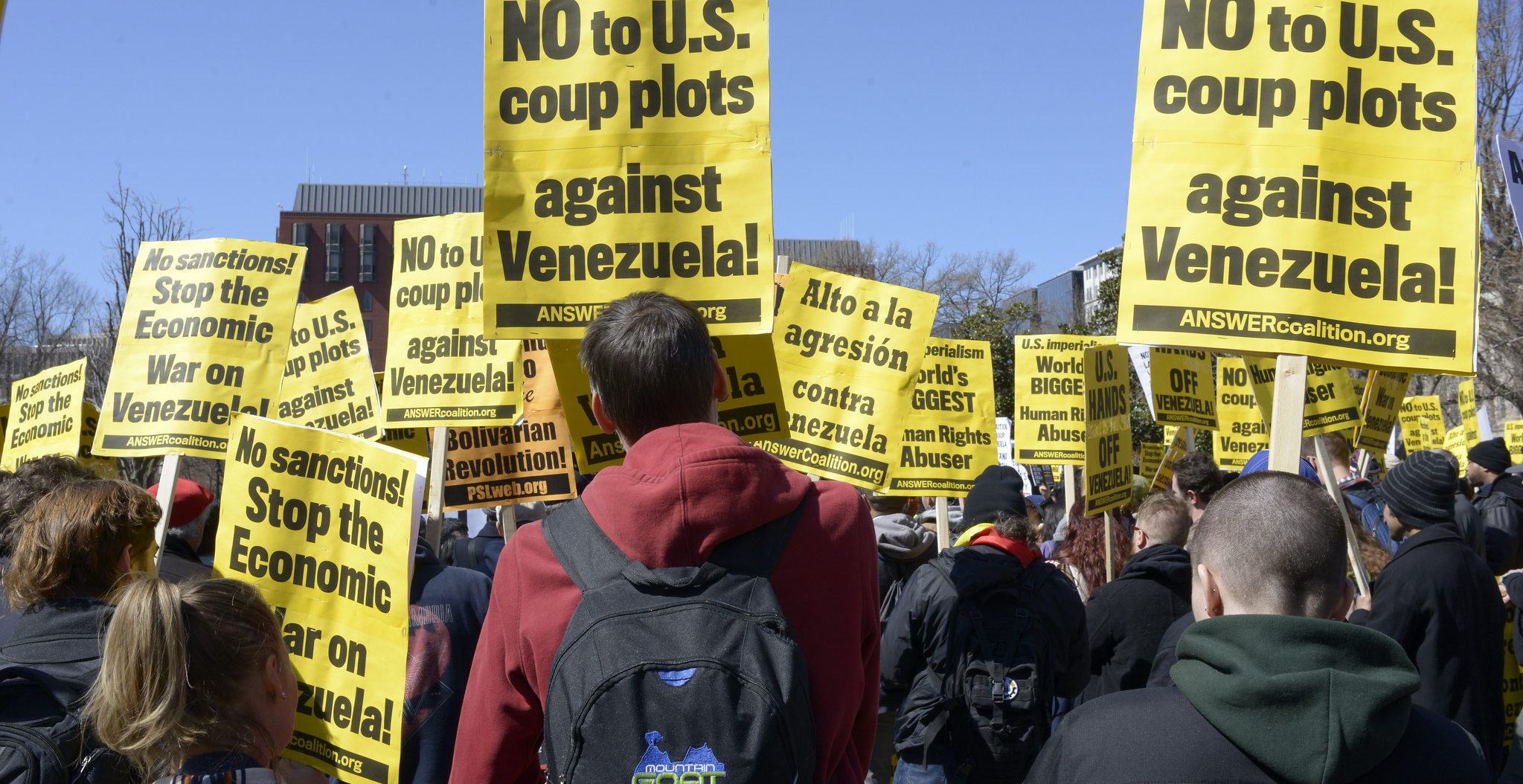 A new report on April 25 by a respected think tank has estimated that US sanctions imposed on Venezuela in August 2017 have caused around 40,000 deaths. This atrocity has been almost entirely blanked by the British ‘mainstream’ media, including BBC News. Additional sanctions imposed in January 2019 are likely to lead to tens of thousands of further deaths.

The report was co-authored by Mark Weisbrot and Jeffrey Sachs for the US-based Center for Economic and Policy Research. CEPR was founded in 1999 ‘to promote democratic debate on the most important economic and social issues that affect people’s lives.’ Its advisory board includes Nobel Laureate economists Robert Solow and Joseph Stiglitz.

Weisbrot is Co-Director of CEPR and his expertise encompasses economic growth, trade, international financial institutions, development and Latin America. Sachs is a world-renowned economist and senior UN advisor with considerable knowledge of policies related to sustainable development and combatting poverty. Their credentials are impressive and the title of their report is damning: ‘U.S. Sanctions on Venezuela Are Responsible for Tens of Thousands of Deaths’.

The Trump administration imposed sanctions on Venezuela in August 2017. These prohibited the Venezuelan government from borrowing in US markets, thus preventing the country from restructuring its foreign debt. As the report made clear:

It is important to emphasize that nearly all of the foreign exchange that is needed to import medicine, food, medical equipment, spare parts and equipment needed for electricity generation, water systems, or transportation, is received by the Venezuelan economy through the government’s revenue from the export of oil. Thus, any sanctions that reduce export earnings, and therefore government revenue, thereby reduce the imports of these essential and, in many cases, life-saving goods.

The sanctions reduced the public’s caloric intake, increased disease and mortality (for both adults and infants), and displaced millions of Venezuelans who fled the country as a result of the worsening economic depression and hyperinflation. They exacerbated Venezuela’s economic crisis and made it nearly impossible to stabilize the economy, contributing further to excess deaths. All of these impacts disproportionately harmed the poorest and most vulnerable Venezuelans.

In January 2019, additional US sanctions cut Venezuela off from its largest oil market – the United States. Washington also intervened to pressure other countries, including India, not to buy Venezuelan oil that had been previously imported by the US. The consequences have been catastrophic. Amongst the report’s findings were:

• More than 40,000 deaths from 2017–18;
• Sanctions have reduced the availability of food and medicine, and increased disease and mortality;
• The August 2017 sanctions contributed to a sharp decline in oil production, causing great harm to the civilian population;
• If US sanctions implemented in January 2019 continue, they will almost certainly result in tens of thousands more avoidable deaths;
• This finding is based on an estimated 80,000 people with HIV who have not had antiretroviral treatment since 2017, 16,000 people who need dialysis, 16,000 people with cancer, and 4 million with diabetes and hypertension (many of whom cannot obtain insulin or cardiovascular medicine);
• Since the January 2019 sanctions, oil production has fallen by 431,000 barrels per day or 36.4 per cent. This will greatly accelerate the humanitarian crisis. But the projected 67 per cent decline in oil production for the year, if the sanctions continue, would cause vastly more loss of human life.

Weisbrot spelled out the enormity of punitive US policy towards Venezuela:

The sanctions are depriving Venezuelans of lifesaving medicines, medical equipment, food, and other essential imports. This is illegal under U.S. and international law, and treaties that the U.S. has signed. Congress should move to stop it.

Just as the corporate media blamed Saddam Hussein for the devastating impact of US-UK sanctions on Iraq which led to the deaths of over one million Iraqis between 1990 and 2003, ‘our free press’ are united in blaming Nicolás Maduro, the Venezuelan president, for the country’s economic and humanitarian crisis. The new CEPR report refutes that propaganda framework. Sachs emphasised:

Venezuela’s economic crisis is routinely blamed all on Venezuela. But it is much more than that. American sanctions are deliberately aiming to wreck Venezuela’s economy and thereby lead to regime change [our emphasis]. It’s a fruitless, heartless, illegal, and failed policy, causing grave harm to the Venezuelan people.

The report highlights that:

The pain and suffering being inflicted upon the civilian population may not be collateral damage but actually part of the strategy to topple the government.

Indeed, Weisbrot and Sachs make the devastating point that sanctions:

would fit the definition of collective punishment of the civilian population as described in both the Geneva and Hague international conventions, to which the US is a signatory.

In a sane political and media world, this would be headline news.

So, what has been the media response to such a damning report by two authoritative experts? In fact, with a single exception, US and UK ‘mainstream’ newspapers have simply turned a blind eye. This lack of coverage is especially ironic in the case of the Guardian. As journalist John McEvoy, a regular contributor to The Canary, pointed out:

In an editorial [in 2008] the @guardian praised CEPR as a “a professional thorn in the side of orthodoxy” & claimed “in a world of Goliaths, CEPR makes a rather effective David”. Yet it has said nothing of CEPR’s recent study holding US sanctions responsible for 40,000 deaths in Venezuela.

We challenged BBC News via Twitter to cover the important new CEPR report implicating US policy in the deaths of over 40,000 Venezuelans:

What are the odds that @BBCNews will push this as their lead story, with major coverage on #BBCNewsTen from one of their big-name reporters? #Venezuela

There has been no BBC coverage, as far as we can see. Online, we found a brief mention in an article by the ‘mainstream’ press agency, Agence France-Presse: it was buried in the final three paragraphs of a 25-paragraph piece. Exceptions to the ‘norm’ of shameful, power-friendly silence were found in media outlets that we are supposed to ignore or disparage in the West: RT, Sputnik International, TeleSur English, Venezuela Analysis, amongst others.

Imagine if Russian policy had been responsible for a similar number of deaths in another country, with tens of thousands more lives at risk in the months to come. The headlines and in-depth coverage here would be incessant. The Russian ambassador in London would be given a stern dressing-down by the UK Foreign Secretary. There would be calls at Westminster from all parties to condemn Putin in the strongest possible terms. There would be global demands for the UN to intervene. The ideological discipline required to ignore such a major crime under Western policy is remarkable, but entirely standard in the corporate media system; as Noam Chomsky has long observed.

To be clear, this unforgivable atrocity rests predominantly on the shoulders of the Trump administration. […] Imagine if Trump deployed a barrage of Tomahawk missiles onto the most impoverished parts of a densely populated city in Venezuela, then hearing anyone say “Well Maduro actually exploded those people, because he wouldn’t do what we told him to do.” […] Sanctions are a slower and more gruelling weapon of war than bombs and missiles, but they’re vastly superior when it comes to the matter of keeping the public asleep through depraved acts of mass slaughter.

As ever, the corporate media is doing its required job of keeping the public in a state of ignorance, or acquiescence, regarding the crimes of the West. ‘When truth is replaced by silence,’ the Soviet dissident Yevgeny Yevtushenko once said, ‘the silence is a lie.’ As John Pilger noted in 2004, following the invasion and occupation of Iraq:

He might have been referring to the silence over the devastating effects of the embargo. It is a silence that casts journalists as accessories, just as their silence contributed to an illegal and unprovoked invasion of a defenceless country.