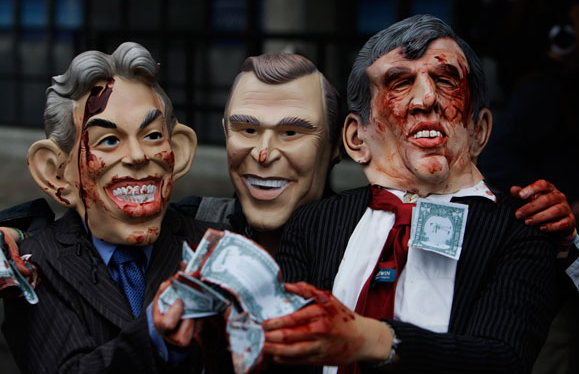 The Ghoulish Face Of Empire

The black-clad fighters of the Islamic State of Iraq and the Levant, sweeping a collapsing army and terrified Iraqis before them as they advance toward Baghdad, reflect back to us the ghoulish face of American empire. They are the specters of the hundreds of thousands of people we murdered in our deluded quest to remake the Middle East. They are ghosts from the innumerable roadsides and villages where U.S. soldiers and Marines, jolted by explosions of improvised explosive devices, responded with indiscriminate fire. They are the risen remains of the dismembered Iraqis left behind by blasts of Hellfire and cruise missiles, howitzers, grenade launchers and drone strikes. They are the avengers of the gruesome torture and the sexual debasement that often came with being detained by American troops. They are the final answer to the collective humiliation of an occupied country, the logical outcome of Shock and Awe, the Frankenstein monster stitched together from the body parts we left scattered on the ground. They are what we get for the $4 trillion we wasted on the Iraq War.

The language of violence engenders violence. The language of hate engenders hate. “I and the public know what all schoolchildren learn,” W.H. Auden wrote. “Those to whom evil is done do evil in return.” It is as old as the Bible.

There is no fight left in us. The war is over. We destroyed Iraq as a unified country. It will never be put back together. We are reduced—in what must be an act of divine justice decreed by the gods, whom we have discovered to our dismay are Islamic—to pleading with Iran for military assistance to shield the corrupt and despised U.S. protectorate led by Nouri al-Maliki. We are not, as we thought when we entered Iraq, the omnipotent superpower able in a swift and brutal stroke to bend a people to our will. We are something else. Fools and murderers. Blinded by hubris. Faded relics of the Cold War. And now, in the final act of the play, we are crawling away. Our empire is dying.

We should have heeded, while we had a chance, the wails of mothers and fathers. We should have listened to the cries of the wounded. We should have wept over the bodies of Iraqi children lined up in neat rows in the morgues. We should have honored grief so we could honor life. But the dance of death is intoxicating. Once it begins you whirl in an ecstatic frenzy. Death’s embrace, which feels at first like sexual lust, tightens and tightens until you suffocate. Now the music has stopped. All we have left are loss and pain.

And where are the voices of sanity? Why are the cheerleaders of slaughter, who have been wrong about Iraq since before the invasion, still urging us toward ruin? Why are those who destabilized Iraq and the region in the worst strategic blunder in American history still given a hearing? Why do we listen to simpletons and morons?

They bang their fists. They yell. They throw tantrums. They demand that the world conform to their childish vision. It is as if they have learned nothing from the 11 years of useless slaughter. As if they can dominate that which they never had the power to dominate.

I sat in a restaurant Thursday in Boston’s Kenmore Square with military historian Andrew Bacevich. You won’t hear his voice much on the airwaves. He is an apostate. He speaks of the world as it is, not the self-delusional world our empire builders expect it to be. He knows war with a painful intimacy, not only as a Vietnam combat veteran and a retired Army colonel but also as the father of a U.S. Army officer killed in a 2007 suicide bombing in Iraq.

“In the 1990s there was a considerable effort made in the military, but also in the larger community of national security experts scratching their heads and [asking] what are the implications of all this technology,” he said. “They conceived of something called the Revolution in Military Affairs—RMA. If you believed in the Revolution of Military Affairs you knew that nothing could stop the United States military when it engaged in a conflict. Victory was, for all practical purposes, a certainty. People like Donald Rumsfeld and Paul Wolfowitz, and I expect Dick Cheney also, bought this hook, line and sinker. You put yourself in their shoes in the wake of 9/11. An attack comes out of Afghanistan, a country frankly nobody cares about, and you conceive of this grand strategy of trying to transform the Islamic world. Where are we going to start? We are going to start by attacking a country [Iraq]—we had it under surveillance and sanctions for the past decade—where there is a bona fide bad guy to make a moral case and where we are confident we can make short work of this adversary, a further demonstration that the American military cannot be stopped. They utterly and totally miscalculated. Iraq is falling apart. And many of these people, either in government or outside of government, who were proponents of the war are now advocating for a resumption of the American war. Not one of them is willing to acknowledge the extent of that military miscalculation. Once you acknowledge it, then the whole project of militarizing U.S. policy towards the Greater Middle East collapses.”

Bacevich blames the concentration of power into the hands of the executive branch for the debacle. He said that since the Kennedy administration “the incoming president and his team, it does not matter which party, see the permanent government as a problem. If we [the new officials] are going to get done what we want to get done we have to find ways to marginalize the permanent government. This has led to the centralization of authority in the White House and means decisions are made by a very small number of people. The consultation becomes increasingly informal, to the point it is not even documented.”

“I do not think we even know when the decision to go to war with Iraq was actually made,” Bacevich said. “There is no documented meeting where [President George W.] Bush sat down with how many people—six, 10, 25—and said, ‘Let’s vote.’ The decision kind of emerged and therefore was implemented. Why would you operate that way? You would operate that way if you viewed the Army, the Navy, the Air Force, the CIA and the State Department as, in a sense, the enemy.”

“The invasion of Iraq was intended to be a catalyst,” he said. “It was supposed to be the catalyst that would enable us … to change the region. It turned out to be the catalyst that resulted in destabilization. The big question of the moment is not what can we do or is there anything we can do to salvage Iraq. The question is to what degree have our actions resulted in this larger regional mayhem. And to the extent they have, isn’t it time to rethink fundamentally our expectations of what American power, and particularly American military power, can achieve?”

“We need to take a radically different course,” Bacevich said. “There is an analogy to be made with Great Britain in the wake of World War I. It was in World War I that Britain and France collaborated to dismantle the Ottoman Empire to create the new Middle East. While on the one hand there was an awareness that Britain was in decline, at the level where policy was made there was not a willingness to consider the implications of that fact. It took World War II to drive it home—that the [British] empire was doomed. I think that is where we are.”

Out of this decline, Bacevich said, is emerging a multipolar order. The United States will no longer be able to operate as an unchallenged superpower. But, he said, similar to the condition that existed as the British Empire took its last gasps, “there is very little willingness in Washington or in policy circles to take on board the implications multipolarity would call for in terms of adjusting our policy.”

The inability to adjust to our declining power means that the United States will continue to squander its resources, its money and its military.

“By squandering power we forfeit our influence because we look stupid and we bankrupt ourselves,” Bacevich said. “We will spend $4 trillion, not dollars spent in the moment but dollars we will have spent the last time the last Afghanistan veteran gets his last VA check. That money is gone forever. It is concealed because in the Bush administration’s confidence that victory would be easily won the government did not bother to mobilize the country or increase our taxes. We weaken ourselves economically. People complain about our crappy infrastructure. Give me $4 trillion and I probably could have fixed a couple of bridges. And we must never forget the human cost. Lives lost, lives damaged. And in these two wars [Afghanistan and Iraq] there does seem to be this increase in PTSD that we don’t know what to do about. It is a squandering of human capital.”

Bacevich said the “military mind-set” has so infected the discourse of the power elite that when there is a foreign policy problem the usual response is to discuss “three different courses of military action. … Should it be airstrikes with drones? Should it be airstrikes with manned aircraft? Special operations forces? Or some combination of all three? And that’s what you get.” The press, he said, is an “echo chamber and reinforces the notion that those are the [only] options.”

The disintegration of Iraq is irreversible. At best, the Kurds, the Shiites and the Sunnis will carve out antagonistic enclaves. At worst, there will be a protracted civil war. This is what we have bequeathed to Iraq. The spread of our military through the region has inflamed jihadists across the Arab world. The resulting conflicts will continue until we end our occupation of the Middle East. The callous slaughter we deliver is no different from the callous slaughter we receive. Our jihadists—George W. Bush, Dick Cheney, Paul Wolfowitz, Donald Rumsfeld, Richard Perle, Thomas Friedman and Tommy Franks—who assured us that swift and overwhelming force in Iraq would transform the Middle East into an American outpost of progress, are no less demented than the jihadists approaching Baghdad. These two groups of killers mirror each other. This is what we have spawned. And this is what we deserve.