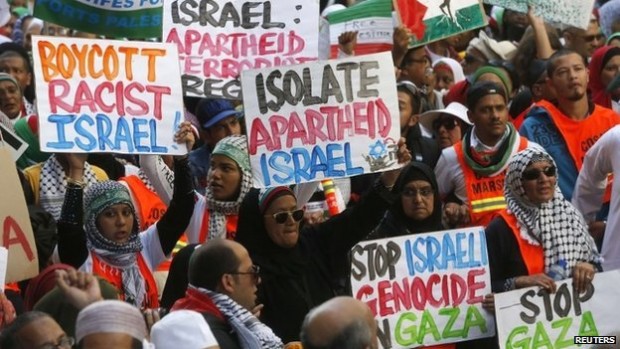 Congress Moving To Undermine Freedom of Speech When To Protect Israel, Israel Comes Before US Constitution

A bill that would criminalise boycotts against Israel has been signed by 45 US senators and 237 congressman.

The so-called “Israel Anti-Boycott Act” would impose fines of up to $250,000 (£192,000) on any US citizen “engaged in interstate or foreign commerce” who supports a boycott of Israeli goods and services.

The US has long defended Israel in territorial disputes in the Middle East, even as the Israeli military has expanded into areas assigned to the Palestinians by international law.

This position runs counter to that of the United Nations, which claims Israel’s settlements in occupied Palestinian territory have “no legal validity”, and “constitute flagrant violation of international law”.

In their new legislation, members of Congress claim the UN is considering a resolution to withhold assistance from – and prevent trade with – settlements in East Jerusalem, the West Bank, and the Golan Heights.

The Israel Anti-Boycott act would punish any American who supported such measures.

However, the American Civil Liberties Union (ACLU) has argued that the bill would “impose civil and criminal punishment on individuals solely because of their political beliefs  about Israel and its policies”, in a letter sent to members of the Senate.

“In short, the bill would punish businesses and individuals solely based on their point of view,” it wrote. “Such a penalty is in direct violation of the First Amendment.”

Israel: From independence to intifada

Conservatives like Senators Ted Cruz of Texas and Marco Rubio of Florida also support it.Even liberal-leaning senators like Kirsten Gillibrand of New York and Maria Cantwell of Washington, and representatives like Adam Schiff of Massachusetts, have signed on to the legislation.

When asked by The Intercept about this support, many legislators seemed unfamiliar with the details.

The American Revolution was founded on boycotts against British goods to protest excessive taxes.

Meanwhile, Senator Benjamin Cardin – the bill’s primary sponsor – said that he “doesn’t think” the bill criminalises participating in boycotts, as the ACLU has claimed.