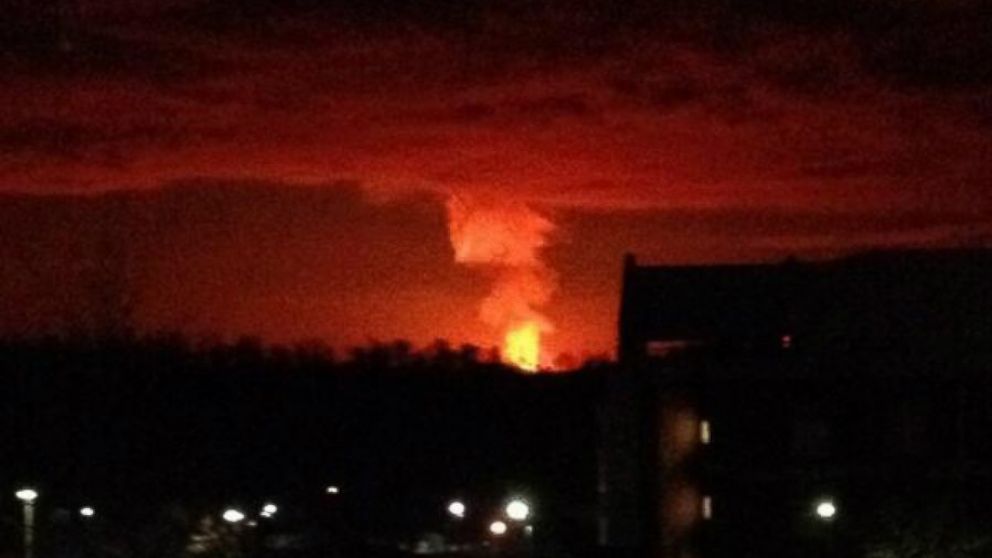 [Update: 1:08 PM EST — Just hours after this post was first published Thursday morning atrain carrying both crude oil and propane gas derailed in western Pennsylvania. The extent of the damage was not yet clear.

Earlier: A gas pipeline explosion in Kentucky early Thursday that sent at least two people to the hospital, destroyed three homes, two barns, numerous cars, and left a 60-foot crater in the ground is the fourth significant fossil fuel-related disaster in the U.S. in as many days.

According to media reports, the cause of the explosion and subsequent fires in the town of Knifley, Kentucky, about 90 miles south of Louisville, was not known but one witness said the blast lit up the sky “just as plain as day.” The section of the pipeline that exploded has been sealed off and an investigation is underway, authorities said.

The incident in Kentucky follows two fossil fuel disasters on Tuesday this week: a coal slurry spill in West Virginia that turned a local river “black” with toxic compounds and a dramatic explosion of a fracking well in western Pennsylvania. On Monday night, a similar explosion to what has happened in Kentucky occurred when a natural gas pipeline “ruptured and exploded” causing a massive fire in North Dakota.

In an email sent to Common Dreams, Jamie Henn, director of stratgey and communications for the climate group 350.org, said this week’s rash of accidents shows the inherent risks and dangers of a fossil fuel industry pushing the boundaries of its extraction and transportion activities.

“The fossil fuel industry is like a giant robot at the end of a horror movie—falling to pieces and lashing out as it strains for ever more resources,” wrote Henn.

“The latest string of disasters bolds and italicizes a basic fact: fossil fuels aren’t safe. Not for our communities, not for our environment, and certainly not for our climate,” he continued. “It’s time politicians to stand up and reject catastrophes like the Keystone XL pipeline and start promoting things that don’t blow up or leak, like solar panels and wind turbines.”