Five women blocked the doors of the Maryland Statehouse in Annapolis on Wednesday, demanding that Gov. Larry Hogan take immediate action to prevent construction of a gas pipeline and drilling under the Potomac River. Holding enlarged photos of their children and grandchildren, all five were arrested for trespassing after refusing to the vacate the entryway for nearly two hours.

Organizers called the civil disobedience action an “escalation” of their efforts to stop TransCanada’s Potomac Pipeline, formally called the Eastern Panhandle Expansion. If built, it would originate in Fulton County, Pa., cross a small slice of Maryland, then pass under the Potomac River and link to the Mountaineer Gas Pipeline, not yet under construction, in West Virginia

Unless Gov. Hogan directs his Secretary of the Environment, Ben Grumbles, to conduct a “401 certification” review process for the pipeline by a March 15 deadline, the state will approve the pipeline by default. At that point, the Maryland Department of the Environment (MDE) has handed over its regulatory powers to the Trump administration in the form of the U.S. Army Corps of Engineers.

For mid-March, it was a bitterly cold day in Annapolis, with temperatures barely reaching 40 degrees and wind gusts up to 30 mph. Small snowflakes even began to fall. At 12:45 pm, Capitol Police gave a first warning to disperse, then a second one 7 minutes later. At that point, those who refused to stop obstructing the doorway after a third warning would be subject to arrest. But police refrained from issuing that order, apparently assuming that if they waited long enough, the women would get cold and leave of their own accord. They persevered, however, singing songs.

In spite of the blockade at the front door, legislators and staff were able to enter and exit the Statehouse through a basement side door. Some, however, did not want to be inconvenienced. A plainclothes officer was not deterred and pushed his way through the line and entered. The women then decided to link arms. But shortly after, two legislators—Sen. Bob Cassily (R-34) and Sen. Steve Hershey (R-36)–shoved the women aside by force so they could exit the building. The activists and supporters shouted, “Shame!” Hershey repeatedly refused to identify himself, saying only, “They were in my way.” He is the Minority Whip in the Maryland State Senate. 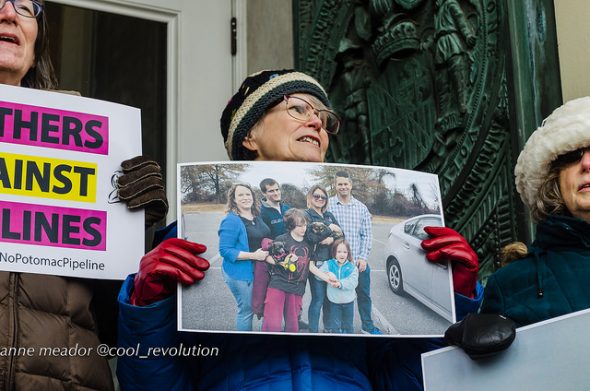 Jean Cushman stands with fellow mothers against the Potomac Pipeline./Photo by Anne Meador

“I love my children and grandchildren,” said Jean Cushman. “What will happen to our children when there is no clean air or clean water and more wildfires, droughts and floods? Governor Hogan can stop this pipeline, and that is why I risked arrest.” Cushman said she had undergone a traumatic brain injury and reflected on the consequences of climate change during her recovery.

Arrestee Liz Feighner had similar thoughts. “Here’s what keeps me awake at night: wondering what the world will look like when my children and then my grandchildren reach my age,” she said. “We need to stop fooling ourselves that fracked gas is a bridge fuel. We are out of time for half measures.”

Environmental organizations have accused MDE of “going through the motions” and pretending to take the public’s concerns seriously when the outcome of the permit process had actually been pre-determined. Much of the debate has focused on the potential hazards of drilling under the Potomac in an area of karst limestone geology, where accidents and blowouts of drilling fluids are more likely. And, the cumulative impacts of the pipeline remain to be evaluated, they say, when the Potomac Pipeline hasn’t been considered along with the connecting Mountaineer Gas Pipeline. 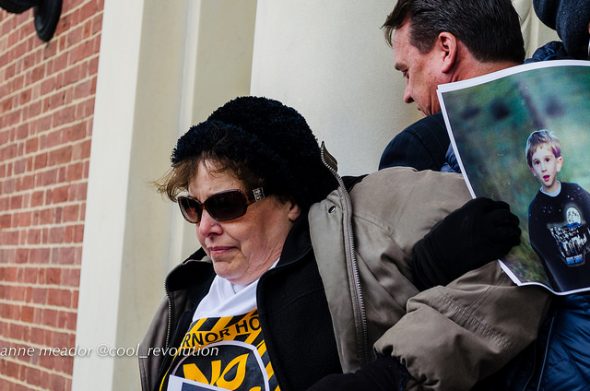 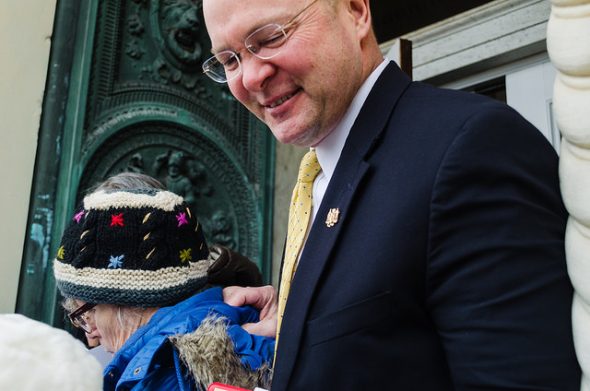 Sen. Bob Cassily pushes his way out of the Maryland Statehouse./Photo by Anne Meador