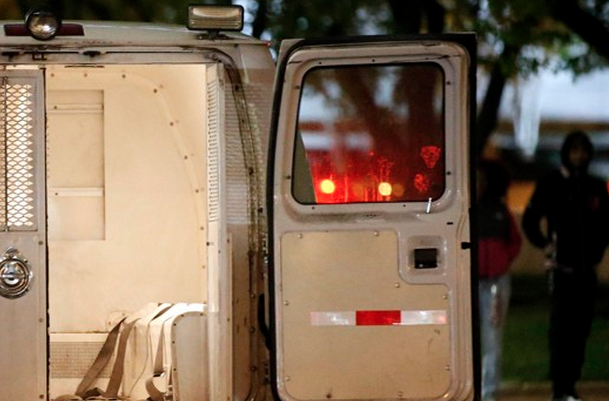 5 Things Everyone Needs To Know About Baltimore

Freddie Gray’s family says 80% of his spine was severed and his voice box was crushed. It’s believed that Gray was the victim of a “nickel ride,” a purposely rough ride designed to dole out “street justice” to suspects. As David Graham wrote in the Atlantic, “Once Gray was in the van, he was handcuffed. Apparently because he was “irate” during the ride, officers stopped and shackled his legs, too. The one thing they didn’t do was buckle his seat belt. Not only does that sound like common sense, it’s also department policy—and BPD admits it was violated.”

While news cameras have descended upon the city of Baltimore and knee-jerk analysis is being offered around the clock, it’s important to keep some things in mind.

1. The six officers connected to the Gray case are on desk duty: Lieutenant Brian Rice. Sgt. Alicia White, Officer Caesar Goodson, Officer William Porter, Officer Garrett Miller, and Officer Edward Nero have been suspended until the investigation concludes, but will continue to earn their salaries.

2. Baltimore has paid out almost $6 million in police brutality settlements since 2011: Over 100 people have won court settlements against the Baltimore Police Department for excessive force, false arrest, or false imprisonment and the city has faced 317 lawsuits. An investigation by the Baltimore Sun told the story of Venus Green, an 87-year-old woman who asked for a warrant after police showed up at her house. Officers had responded because Green’s grandson had been shot in the leg and a white officer insisted he had been shot inside Green’s house. Green insisted that he hadn’t and worried that her two dogs would attack if the house were searched. According to Green, the officer entered the house anyway, pushed her against a wall, and declared, “Bitch, you ain’t no better than any of the other old black bitches I have locked up.”

“He pulled me up, pushed me in the dining room over the couch, put his knees in my back, twisted my arms and wrist and put handcuffs on my hands and threw me face down on the couch,” Green told the paper. Green reached a settlement with the department in 2012. Many other victims of police brutality were unable to be interviewed for the story because of a clause in the city’s agreement saying that victims can’t talk about the incident that prompted their lawsuit. If they do, city lawyers are allowed to sue and potentially take back half of their total settlement.

3. Baltimore cops are sowing distrust in the community with claims that are likely false: The Baltimore Police Department claimed it had a “credible threat” of gangs uniting in order to “take out” police officers. However, the Bloods and Crips have seemingly brokered a truce so that they can protest police brutality. Do the cops simply assume this involves taking them out? Is it simply an excuse to inflict more violence? A man claiming to be a gang member told a local TV station, “We’ve been out here all day trying to prevent people from breaking the stores, (but) they hit us with a bomb, they burned my shirt, they ripped it and we were still standing right there, but we came right back there holding hands together and we march together, we’re still holding strong, and we want them to stop hurting us so we can just live our life and keep going.”

As Michelle Alexander wrote on her Facebook page, “During the past few days, the mainstream media has (a) either ignored the fact that the Crips and Bloods in Baltimore entered a truce so they could march united in their demands for justice for Freddie Gray or (b) has repeated the sensational claims of law enforcement that the truce merely reflects some grand conspiracy to kill cops.”

4. There have been multiple eyewitness accounts of cops terrifying young children and leaving them stranded:

5. At least 109 people have been killed by Baltimore police since 2010:Forty percent of those people were unarmed. Almost 70% of them were black. Less than 2% of the officers in these cases were criminally charged.