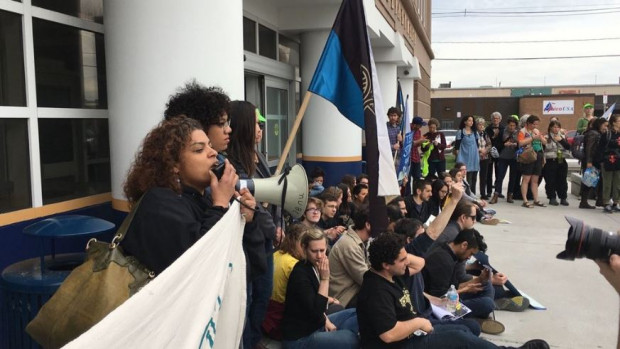 Above Sit-in at ICE office in Boston, May 24, 2017 by Movimiento Cosecha‏. From @CosechaMovement on Twitter.

Margaret Flowers and Kevin Zeese interviewed Movimiento Cosecha Boston volunteer organizer, Sergio Hurtado, about the Boston protest and the build-up to the May 1 national “Day Without Immigrants” strike. May Day will involve hundreds of thousands of people striking across the country. Sergio explains they focused on the Boston ICE Center because they were targeting activists and describes the organizing that is leading up to May 1st. This is all part of a much longer campaign and Cosecha plains to continue to organize even larger mass days of protests as well as longer term multi-day strikes involving millions of people in the future.  Listen to the interview on Clearing The FOG Radio.

The demonstration is part of national wave of direct action leading up to May 1st “Day Without Immigrants” strike. The civil disobedience in Boston follows the detention of three immigrant rights activists from Vermont.

Boston- On Monday people from across Greater Boston launched a wave of escalated against the deportation system in Massachusetts and around the country, to show the immigrant community that they will stand with them on May 1st.

The demonstrators, called for Immigration and Customs Enforcement (I.C.E) cease the detention and deportation of undocumented people and the intimidation of those who speak up for themselves and the immigrant community. Clergy, students and allies who participated in the action called for people of conscience across the country to stand with immigrants who will be striking, boycotting and marching for the May 1st “Day Without Immigrants”.

Demonstrators are calling for people across the country to pledge to support for workers who will be striking on May 1st. “We need the public to pledge to boycott any business that would fire workers who strike on May 1st, and show employers that strikers have the support of the community,” said Brenda Valladares a spokesperson for Cosecha.  “Monday is Yom HaShoah, Holocaust Remembrance Day. On this mournful day, standing with Cosecha against the xenophobic policies of ICE and this Administration–this is where I, as a rabbi, have to be, alongside so many who yearn for dignity and protection in America,” said Rabbi Matt Soffer of Temple Israel.

The sit in a the South Bay detention center in Boston comes in response to the detention of three immigrant rights activists from Justicia Migrante in Burlington, VT: Jose Enrique “Kike” Balcazar, Zully Victoria Palacios, and Cesar Alexis Carrillo Sanchez. ICE has been specifically targeting immigrant rights activists in what appears to be blatant political retaliation for advocating publicly for the rights of immigrants and dairy workers.

“While the realities of raids, repression, and deportations are nothing new for our people, they’ve reached an unbearable boiling point,” said Rodrigo Saavedra, a Cosecha organizer. “The time has come for immigrants to transform the political weather. Cosecha is planning what could be the largest immigrant strike since the 2006 megamarches on May 1. It will be a Day Without Immigrants: We won’t work; we won’t buy; we won’t go to school. Instead, we will rise together, we will march together and, in the absence of our labor and consumption, we will be recognized.”

The demonstration follows a series of recent actions by Cosecha groups around the country, including a highway takeover in Grand Rapids, Michigan in which three demonstrators were arrested in act of civil disobedience.