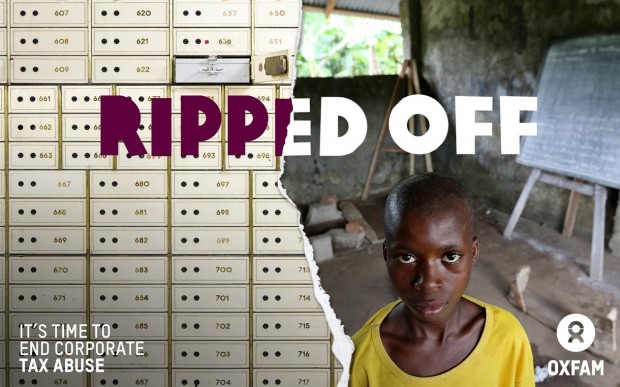 As Americans are finalizing their tax returns, corporations are hiding trillions in offshore tax havens and dodging billions in tax payments in the US and around the world—payments that should go to schools, roads, and health care.

Oxfam’s recently released “Broken at the Top” report outlines how the top 50 US companies use offshore tax havens and other aggressive and secretive schemes to stash profits and dramatically lower their corporate tax rates in the United States. The companies, which made nearly $4 trillion in profits globally between 2008 and 2014, paid an average effective tax rate of just 26.5 percent— well below the statutory tax rate of 35 percent in the US and also well below the tax rate of an average US worker of 31.5 percent.

Oxfam’s report comes days after the International Consortium of Investigative Journalists released its report on thePanama Papers, which details a massive web of offshore tax havens and shell companies helping the world’s wealthiest individuals avoid taxes. These revelations, combined with data on global companies in Oxfam’s report, reveal a system that concentrates wealth into fewer and fewer hands, puts the tax burden unfairly on those least able to pay, and deprives the world of billions in revenues countries need to fight poverty.

US taxpayers would have to shell out another $760 each in order to cover the $100 billion gap that tax dodging costs the US government.

The report reveals the same corporations dodging taxes are among the largest beneficiaries of US taxpayer-funded support, receiving a staggering $11 trillion in federal loans, loan guarantees, and bailout assistance from 2008 to 2014. Oxfam calculated that during this period, these 50 companies collectively received approximately $27 in loan support for every $1 they paid in federal taxes.

Oxfam’s new interactive website brings exposure to global corporate tax dodging, allowing you to calculate how much you would pay in taxes if you were a corporate tax dodger and then to sign a petition calling on Congress to pass the Stop Tax Haven Abuse Act, legislation designed to close the corporate tax loopholes here in the US while increasing transparency to fight tax dodging abroad.

“When corporations don’t pay their fair share of taxes, governments–rich and poor–are forced to cut services or make up the shortfall from working families and small businesses. Neither is acceptable,” said Ray Offenheiser, president of Oxfam America.

Learn more about how corporations are dodging taxes that could be helping people around the world—and take action to stop it.