50 Years After The Kerner Commission

The year 1968 was a watershed in American history and black America’s ongoing fight for equality. In April of that year, Martin Luther King Jr. was assassinated in Memphis and riots broke out in cities around the country. Rising against this tragedy, the Civil Rights Act of 1968 outlawing housing discrimination was signed into law. Tommie Smith and John Carlos raised their fists in a black power salute as they received their medals at the 1968 Summer Olympics in Mexico City. Arthur Ashe became the first African American to win the U.S. Open singles title, and Shirley Chisholm became the first African American woman elected to the House of Representatives.

The same year, the National Advisory Commission on Civil Disorders, better known as the Kerner Commission, delivered a report to President Johnson examining the causes of civil unrest in African American communities. The report named “white racism”—leading to “pervasive discrimination in employment, education and housing”—as the culprit, and the report’s authors called for a commitment to “the realization of common opportunities for all within a single [racially undivided] society.”1 The Kerner Commission report pulled together a comprehensive array of data to assess the specific economic and social inequities confronting African Americans in 1968.

Following are some of the key findings:

The large increase in high school completion rates helped to close the gap relative to whites. In 1968, African Americans trailed whites by more than 20 percentage points (75.0 percent of whites had completed high school, compared with 54.4 percent of blacks). In the most recent data, the gap is just 3.3 percentage points (95.6 percent for whites versus 92.3 percent for African Americans).

Over the same period, however, college completion expanded for whites at a similar pace, rising from 16.2 percent in 1968 to 42.1 percent today, leaving the relative situation of African Americans basically unchanged: in 1968 blacks were just over half (56.0 percent) as likely as whites to have a college degree, a situation that is essentially the same today (54.2 percent).2

We would expect that these kinds of increases in the absolute levels of formal education would translate into large improvements in economic and related outcomes for African Americans. The rest of our indicators test the validity of this assumption.

The unemployment data for these two years, almost 50 years apart, demonstrate a longstanding and unfortunate economic regularity: the unemployment rate for black workers is consistently about twice as high as it is for white workers.

Hourly wages. The inflation-adjusted hourly wage of the typical black worker rose 30.5 percent between 1968 and 2016, or about 0.6 percent per year. This slow rate of growth is particularly disappointing given the large increase in educational attainment among African Americans over these decades.

Even slower real wage growth (about 0.2 percent per year) for the typical white worker—albeit starting from a higher initial wage—meant that African Americans did modestly close the racial wage gap over the last five decades. But, in 2016, by the hourly wage measure used here, the typical black worker still only made 82.5 cents on every dollar earned by the typical white worker.4

The typical black family had almost no wealth in 1968 ($2,467; data refer to 19637). Today, that figure is about six times larger ($17,409), but it is still not that far from zero when you consider that families typically draw on their wealth for larger expenses, such as meeting basic needs over the course of retirement, paying for their children’s college education, putting a down payment on a house, or coping with a job loss or medical crisis.

Homeownership. One of the most important forms of wealth for working and middle-class families is home equity. Yet, the share of black households that owned their own home remained virtually unchanged between 1968 (41.1 percent) and today (41.2 percent). Over the same period, homeownership for white households increased 5.2 percentage points to 71.1 percent, about 30 percentage points higher than the ownership rate for black households.9

Infant mortality. Over the last five decades, African Americans have experienced enormous improvements in infant mortality rates. The number of deaths per 1,000 live births has fallen from 34.9 in 1968 to 11.4 in the most recent data. Over the same period, whites have also seen dramatic reductions in infant mortality, with rates falling from 18.8 to 4.9 by the same measure.

In relative terms, however, African Americans have fallen behind. In 1968, black infants were about 1.9 times as likely to die as white infants. Today, the rate is 2.3 times higher for African Americans.10

Life expectancy. African Americans’ life expectancy at birth has also increased substantially (up 11.5 years) between 1968 and today, outpacing the increase for whites (up 7.5 years). But an African American born today can, on average, still expect to live about 3.5 fewer years than a white person born on the same day.11 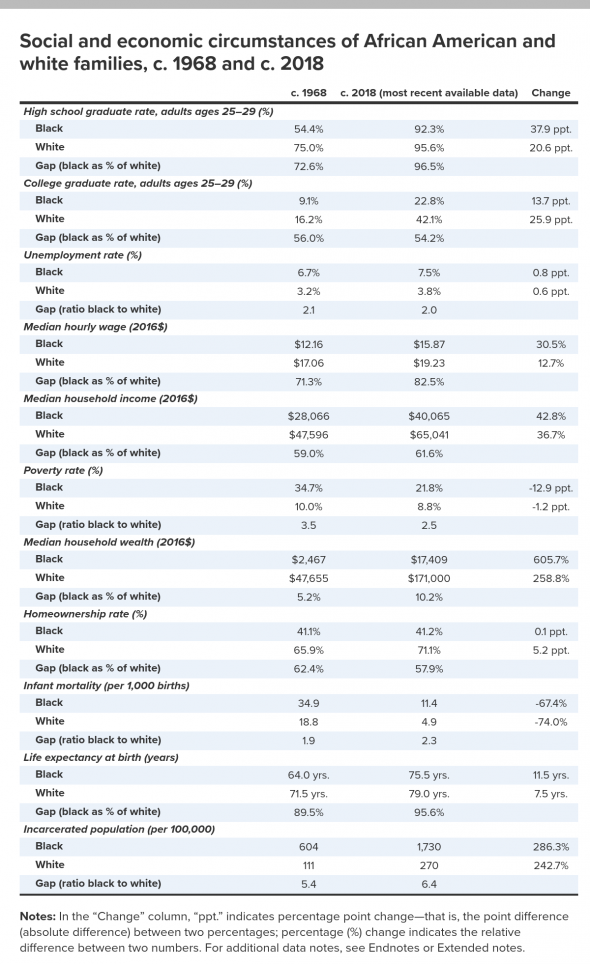 Making comparisons over five decades is challenging. Data sources collected across so many years are not always directly comparable. One issue is that most government data in the 1960s grouped the population into only two groups: “white” and “nonwhite.” Following the Kerner Commission and other researchers, our figures here use the “nonwhite” data as a proxy for the circumstances of African Americans at the time. We are confident that the “nonwhite” data do a reasonably good job capturing the experience of African Americans. The 1970 census, which included more detailed information on race than most government data in the 1960s, estimates that people from races other than white and African American (primarily Native Americans and Asians) constituted only about 1.4 percent of the U.S. population at the time. The 1980 census allowed respondents of any race to identify themselves as Hispanic, and in that year only about 7 percent did so.

A second issue is that data specifically for 1968 are not always available. In these cases, we either use data for the closest available year, or we use data for years before and after 1968 (usually 1960 and 1970) and interpolate. Our data for “2018” are the most recent data available for each of the indicators we examine, typically either 2015, 2016, or 2017 data.

4. Median hourly wage data are from EPI analysis of March Current Population Survey data for calendar years 1968 and 2016. Data for 1968 are converted to 2016 dollars using the CPI-U-RS chained to the CPI-U-X1.

5. Median household income data are from the U.S. Census Bureau, “Table H-5. Race and Hispanic Origin of Householder—Households by Median and Mean Income: 1967 to 2016,” Historical Income Tables, accessed February 4, 2018, at www.census.gov. The most recent year is 2016. Data for 1968 are converted to 2016 dollars using the CPI-U-RS chained to the CPI-U-X1.

7. As noted in the appendix, data for 1968 are not always available. In this case, we use data for the closest available year, 1963.

8. Median household wealth data are from an Urban Institute analysis of Survey of Consumer Finances data, presented in “Chart 3: Average Family Wealth by Race/Ethnicity, 1963–2016,” in Nine Charts about Wealth Inequality in America, updated October 24, 2017. Data refer to 1963 and 2016. Data for 1963 are converted to 2016 dollars.

12. Incarcerated population data are from the authors’ calculations based on unpublished tabulations by Kris Warner of the Center for Economic and Policy Research, using Bureau of Justice Statistics and U.S. Census Bureau data.