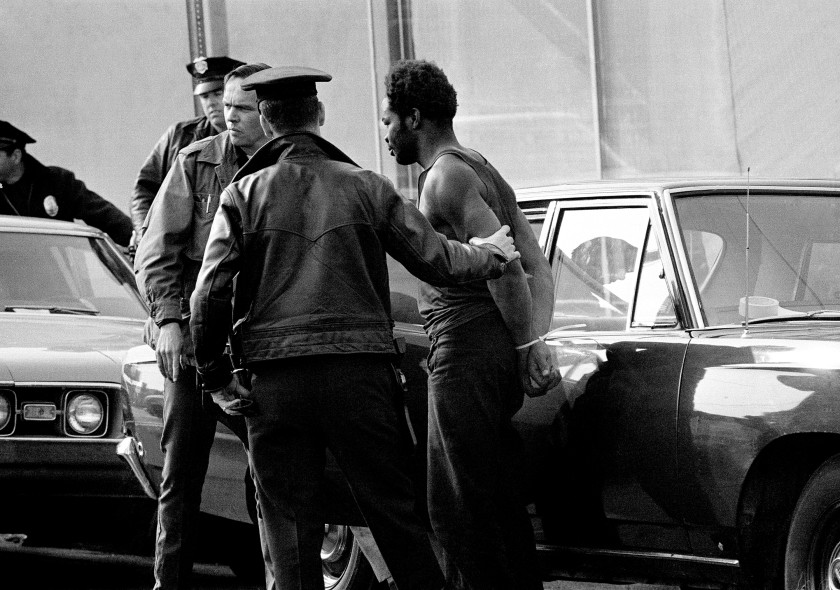 Above Photo: A Black Panther surrenders to police after a four-hour confrontation at the party headquarters in Los Angeles, Dec. 9, 1969. (Wally Fong / Associated Press)

Militarized police teams have been targeting black communities ever since

In the early morning hours of Dec. 8, 1969, Bernard Arafat awoke to explosions rocking the library of the Black Panthers’ 41st and Central Avenue headquarters in Los Angeles. Above him, footsteps stomped across the roof. Then gunfire erupted.

Arafat wasn’t a seasoned Panther. He was a 17-year-old runaway from juvenile hall whose parents had both died when he was 13. After years of committing small-time crimes, Arafat was taken in by the Panthers and gained a sense of purpose. He helped with the organization’s breakfast program, feeding hungry kids on their way to school.

Arafat had never fired a gun. But as he listened to the sound of bullets and heard the screams of his fellow Panthers, he made a decision.

“I found an automatic shotgun and defended myself.”

Arafat didn’t know it then, but he was part of an experiment in policing. On that morning 50 years ago, the Panthers became the targets of the world’s first major raid by a Special Weapons and Tactics, or SWAT, team. More than 350 officers took on 13 Panthers, ostensibly to execute arrest warrants. The group they battled included three women and five teenagers.

Before the day was over, police would detonate explosives on the Panthers’ roof and call in a tank for reinforcements. Six Panthers were wounded, as were four SWAT officers, before the men and women in the house surrendered. Combined, the two sides exchanged more than 5,000 rounds of ammunition.

Miraculously, no one was killed.

For one of the most dramatic moments in American policing, the raid on the Panthers headquarters is a relatively small historical footnote. But in the years since, SWAT has become a mainstay of modern policing. Between 2000 and 2008, more than 9,000 of the nation’s roughly 15,000 law enforcement agencies employed a SWAT unit. Thanks to the Pentagon’s controversial “1033 program,” even small-town police departments across the country have stocked up on military-grade hardware, including armored vehicles built to withstand roadside bombs and rocket-propelled grenades. SWAT deployments increased by more than 1,500% nationwide between 1980 and 2000.

The LAPD’s official history says the department created the nation’s first SWAT team out of concern that officers couldn’t handle sniper and hostage incidents, such as those they encountered during the Watts riots of 1965. Darryl F. Gates, then a young inspector in the department, green-lighted the concept, which he called “Special Weapons Assault Team” until leveler heads at LAPD thought better of the optics.

Former SWAT Sgt. Patrick McKinley cut his teeth in the LAPD during the Watts riots. His most vivid memory from the unrest was seeing an old woman in pajamas calling to her cat in the front yard of her bullet-ridden home, shortly after the National Guard had shot up the property in an attempt to stop a shooter holed up in her neighbor’s place.

McKinley was on the SWAT team from the start, but early on, it didn’t figure heavily among his duties. Extreme tactical situations such as hostage taking or sniper fire, it turned out, were fairly rare. Using the SWAT team to serve the Panther arrest warrants was not only its first major deployment, it was a deviation in the unit’s original mission.

Yes, the Panthers were armed and certainly might be dangerous if provoked. But that hadn’t stopped the LAPD from detaining or arresting any number of them over the preceding several months. There were no hostages at 41st and Central Avenue, and the Panthers weren’t barricaded in. The wanted members had to leave the building at some point, where waiting officers could arrest them.

Across the country at the time, police antipathy toward the Panthers was rising, in part fueled by dirty tricks from the FBI’s conintelpro unit. As McKinley, who participated in the raid, said: “We had to take them out.”

The Panther raid also has to be looked at in the context of the department’s racial history. Until just a few years before the raid, the LAPD had been headed by William Parker, who once complained during a television news interview that an influx of African Americans moving to L.A. to escape the Jim Crow South had “flooded a community that wasn’t prepared to meet them. We didn’t ask these people to come here.” For most of his tenure he refused to hire black officers to police their own communities and instead sought white recruits from across the country.

In its Panther deployment, SWAT was transformed from a tool of surgical precision into a blunt-force battering ram, and that’s ultimately how it would find its calling in police departments across the country — especially in African American communities.

Last year, Princeton assistant professor of politics and public affairs Jonathan Mummolo published a data-driven analysis of militarized policing in the United States. He found that less than 5% of SWAT raids involved the kind of high-risk scenarios they were intended for, such as terrorist attacks, hostage situations or active shooters.

“These are really rare events in the day-to-day scenarios of police departments,” says Mummolo. “So these teams have been adapted to handle more mundane situations.”

In Maryland, where Mummolo conducted most of his research, more than 90% of SWAT deployments were in service of a search warrant, and black communities were overwhelmingly on the receiving end of these non-emergency militarized raids.

Mummolo further found that these types of raids neither reduced crime nor made police officers safer. But they did erode public trust in police.

Peter Kraska, professor of police studies at Eastern Kentucky University, has studied the militarization of American policing for more than two decades. He says LAPD’s SWAT team “unequivocally served as the model for the rest of the country,” which hasn’t been positive.

“SWAT uses Navy SEAL techniques to go on fishing expeditions,” says Kraska. “They bust down the door, throw flash grenades, handcuff everyone inside, ransack the place and leave. And these techniques are predominately used on communities made up of racial minorities.”

The SWAT Panther raid in Los Angeles was just such an expedition. It resulted in 13 arrests and a total of 72 criminal counts being filed. But at trial, the Panthers’ attorneys, including a young Johnnie Cochran, argued that the group had acted in self-defense. SWAT had entered the building unannounced with guns blazing.

A mixed-race jury agreed, finding the Panther defendants not guilty on almost all charges, including the most serious ones of assault with a deadly weapon and conspiracy to murder policemen. Arafat, who had skipped bail and fled underground to Puerto Rico, returned to Los Angeles.

For SWAT, the whole incident was, in many ways, a spectacular fiasco. The raid failed to produce the kind of convictions prosecutors had envisioned; it was also a failure of mission. A unit created for the explicit purpose of preventing uncontrollable armed conflict instead initiated a full-on battle in a crowded urban setting, played out before the entire nation.

But that lesson didn’t take hold across the country. Instead, in the years since, law enforcement has increased its reliance on militarized policing, especially in communities of color, sabotaging community relations and making no one safer.

Fifty years after waking up a target in SWAT’s crosshairs, Arafat believes this was all part of the design.

“SWAT evolved as a way to control people, places and things. It started with us. Now it’s everywhere.”