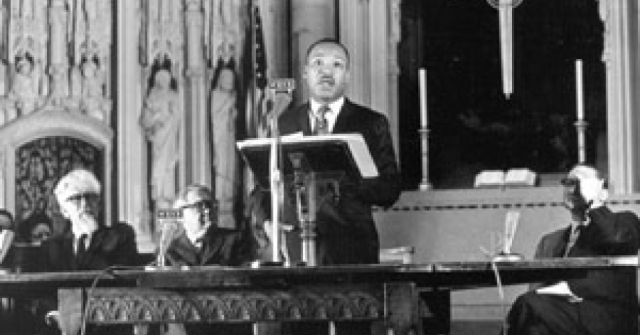 50 Years Later We Still Must Reject US Wars

Above: The Rev. Dr. Martin Luther King, Jr. speaking on April 4, 2007 at the Riverside Church in New York City, giving his Beyond Vietnam speech.

Note: Distinguished human rights activist and 2016 Green party Vice-Presidential nominee Ajamu Baraka today announced the formation of the Black Alliance for Peace, an organization that will oppose U.S. militarism and its devastating effects on poor and working-class communities both domestically and globally. The rationale for BAP is described in the article below.

Through educational activities and organizing, and drawing from the black-led pro-democracy and social justice struggles in the South during the civil rights movement in the 1960s and ‘70s, The Black Alliance for Peace will forge this connection into an agenda for change. “By linking the issues of state violence and militarism, BAP will concentrate its efforts on opposing both the U.S. global military agenda as well as the war and repression being waged on black and brown communities domestically,” Mr. Baraka says.

Mr. Baraka has embarked on a Power to the People national tour that will continue through May 12 and will be speaking about the Black Alliance for Peace as well as other human rights issues that he spotlighted during the 2016 presidential campaign.

The full BAP announcement can be found here. For more information on Ajamu Baraka please visithttps://www.ajamubaraka.com/. 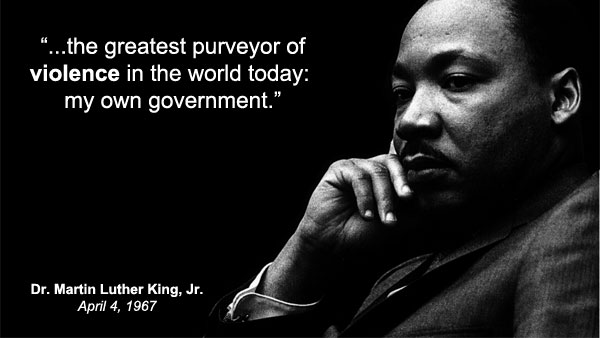 On 50th Anniversary of King’s Beyond Vietnam Speech, Let Us Rededicate Ourselves to Building a Movement That Rejects the Dehumanizing Effects of War

Fifty years ago, on April 4, 1967, Dr. Martin Luther King reconnected with the radical black tradition by adding his voice of opposition to the murderous U.S. war machine unleashed on the people of Vietnam. For Dr. King, his silence on the war in Vietnam had become an irreconcilable moral contradiction. He declared that it was hypocritical for him to proclaim the superior value of non-violence as a life principle in the U.S. and remain silent as the U.S. government engaged in genocidal violence against a people whose only crime was to believe that they could escape the clutches of French and then U.S. colonialism.

“As I have walked among the desperate, rejected, and angry young men, I have told them that Molotov cocktails and rifles would not solve their problems,” Dr. King said. “I have tried to offer them my deepest compassion while maintaining my conviction that social change comes most meaningfully through nonviolent action. But they asked, and rightly so, ‘What about Vietnam?’ They asked if our own nation wasn’t using massive doses of violence to solve its problems, to bring about the changes it wanted. Their questions hit home, and I knew that I could never again raise my voice against the violence of the oppressed in the ghettos without having first spoken clearly to the greatest purveyor of violence in the world today: my own government.”

In his speech at Riverside Church, King not only criticized U.S. actions in Vietnam but identified the cultural pathologies at the center of U.S. society. “I am convinced that if we are to get on to the right side of the world revolution, we as a nation must undergo a radical revolution of values,” he said. “We must rapidly begin the shift from a thing-oriented society to a person-oriented society. When machines and computers, profit motives and property rights are considered more important than people, the giant triplets of racism, extreme materialism, and militarism are incapable of being conquered.”

50 years later, what rational person can honestly argue against the position that the U.S. is still the greatest purveyor of violence on the planet?

But what existed in 1967 that helped put moral and political pressure on King was a militant anti-war and anti-imperialist movement; a movement that in many respects was born out of the black-led pro-democracy and social justice struggles and organizing in the South. Many of the young white activists who took up opposition to the war and built such organizations as Students for a Democratic Society (SDS) cut their activist teeth while working with black activists in the South. From the Student Non-Violent Coordinating Committee and the Revolutionary Action Movement (RAM) to the Northern-based Black Panther party, the cutting edge of the Black liberation movement took an early and resolute oppositional stance against the war on Vietnam.

After almost three decades of pro-war conditioning by both corporate parties and the corporate media coupled with cultural desensitization from almost two decades of unrelenting war, opposition to militarism and war is negligible among the general population. The black public has not been immune to these cultural and political changes. And with the ascendancy of the corporatist President Barack Obama, during whose tenure the U.S. continued its militaristic bent unabated and in fact ratcheted up its aggressive posturing in some parts of the globe, particularly in the Middle East, there was a decidedly rightward shift in the consciousness of the black public and a significantly dampened anti-war sentiment among black people.

Politically the result has been disastrous for the society and for the U.S. anti-war movement. The bi-partisan warmongering over the last two decades has met very little opposition, and the traditional anti-war stance of the black population has almost disappeared.

But once again we are seeing opposition to militarism, violence and war developing among young people. And once again we are seeing young black voices making the connections between opposition to domestic state violence and the moral necessity to be in opposition to the U.S. war machine reflected in the policy statements from the Movement for Black Lives, BYP 100 and the Black Lives Matter network. Those positions are supported by the Black Left Unity Network, the Black is Back Coalition and other black formations. What is needed at this historical moment is for those forces to be galvanized and given more strategic focus.

What is needed is a Black Alliance for Peace (BAP).

The BAP must be a people(s)-centered human rights project against War, Repression, and imperialism that seeks to recapture and redevelop the historic anti-war, anti-imperialist, and pro-peace positions of the radical black movement. So, on April 4, we are calling for a new alliance to help revive the black anti-war and peace movement in the black community as an essential component of a revived broader anti-war and pro-peace movement. Moreover, this new movement is even clearer on the connection between state violence and repression and the global war-mongering of the U.S. The pivot to Asia, the rotating of NATO troops on the borders of Russia, the destabilization of the U.S. African Command (AFRICOM), continued support for apartheid Israel, police executions and impunity in the U.S. and mass incarceration are all understood to be part of one oppressive, desperate structure of global white supremacy.

Dr. King also called upon the nation to understand the link between the unfulfilled economic needs of the majority of the population ground down by the ravages of an unforgiving racialized capitalism and the ruling class commitment to direct public funds toward militarism. His call for a poor people’s campaign was the human rights foundation of his anti-war position.

Militarism has a direct impact on working people and the poor. Even Republican president Dwight Eisenhower understood this when he issued what in today’s right-wing U.S. culture would read as a radical statement:

“Every gun that is made, every warship launched, every rocket fired signifies, in the final sense, a theft from those who hunger and are not fed, those who are cold and are not clothed. This world in arms is not spending money alone. It is spending the sweat of its laborers, the genius of its scientists, the hopes of its children.”

There must be an alternative to the neoliberalism of the Democrats and the nationalist-populism of Trump. We need an independent movement to address both the economic needs of poor and working people and the escalating attacks on the Black community, immigrants, women, unions, the LGBTQ community, refugees, Muslims, the physically and mentally challenged, youth, students, the elderly, Mother Earth – all of us. We need a new movement to end the wars on black people and people around the world. The BAP is a significant step toward helping to revive the anti-war, anti-imperialist and anti-state-repression movement in the U.S. Let us on this 50th anniversary re-dedicate ourselves to building a movement for social justice that rejects the de-humanizing effects of war on everyone.