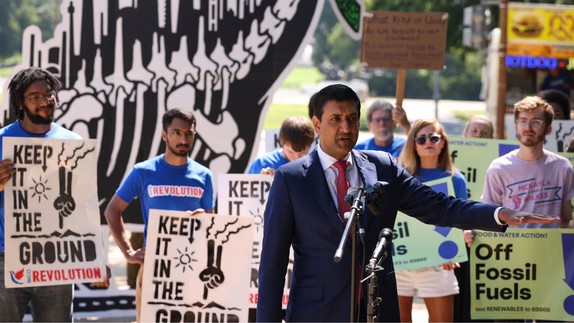 The U.S. movement for climate justice continued a series of actions planned for the nation’s capital this week with a Tuesday morning rally focused on ending fossil fuel subsidies.

As high temperatures persisted in both the Northeast and Pacific Northwest—which experts and activists have connected to the climate emergency—campaigners with hundreds of progressive and green groups joined Reps. Nanette Barragán (D-Calif.), Earl Blumenauer (D-Ore.), Ro Khanna (D-Calif.), and Ilhan Omar (D-Minn.) for the rally in Washington, D.C.

“I can’t believe we’re still talking about this,” declared Lukas Ross, Climate & Energy Program manager at Friends of the Earth U.S., one of more than 500 groups behind the live-streamed event and a related letter (pdf) to Democratic leadership.

“For over a hundred years, fossil fuel corporations have cashed in on tax cuts and other shameless giveaways,” Ross said. “Leaving these gimmicks on the books would be a monumental failure of climate leadership.”

The organizations’ letter to House Speaker Nancy Pelosi (D-Calif.) and Senate Majority Leader Chuck Schumer (D-N.Y.) calls for “the elimination of fossil fuel subsidies and other giveaways in any infrastructure, economic recovery, and/or reconciliation legislative package.”

The groups express appreciation for their “past and ongoing support on this crucial issue,” referencing speeches the Democratic leaders have given that “highlighted the injustice and destructiveness of these giveaways to an industry” that have fueled the climate and ecological crisis.

“As you noted, fossil fuels are outdated energy sources that produce enormous levels of pollution that harm our communities, natural areas, and climate,” the letter says. “These impacts fall hardest on historically marginalized communities, including Black and Indigenous communities in particular.

“Ten years later, climate impacts are mounting but more than $15 billion in annual wasteful and destructive federal giveaways to the fossil fuel industry remain on the books,” the groups continue, noting that President Joe Biden recently proposed a set of subsidy repeals estimated at $121 billion of tax expenditures over the next decade.

The letter adds that “it is past time to remove the burden of dirty energy support from the public and instead turn the efforts of the government to supporting clean energy and the jobs it generates. Action taken now will help us protect our climate, promote a more equitable, clean energy economy for America, and strengthen international leadership.”

The rally and letter come as congressional leaders and Biden are sorting out infrastructure legislation. Currently, Democrats are taking a two-track approach, pushing for a reconciliation bill to address “human infrastructure” provisions left out of a $579 billion bipartisan deal that the president and centrist lawmakers announced late last week.

“As discussions around infrastructure and budget reconciliation heat up, we are going to make our voice heard—one red line for progressives is making sure we end fossil fuel subsidies, period,” Joseph Geevarghese of rally organizer Our Revolution told The Independent ahead of Tuesday’s event.

“For far too long, the federal government has provided subsidies to oil and gas companies that no other industry gets while polluting our air and water and damaging the health of our children,” he added. “We must stop taxpayer dollars from contributing to the destruction of our health and our planet, that is what tomorrow’s demonstration is all about.”

At the rally, Greenpeace USA chief operating officer Ebony Martin said that “giving any amount of taxpayer money to an industry that poisons our kids, our planet, and our democracy is outrageous.”

“We are fighting for a world beyond fossil fuels in which everyday people’s well-being, health, and families come first,” Martin added. “It’s time for President Biden and Congress to act now by shifting our money away from the fossil fuel industry and towards a clean, just energy system of the future.”

“Using taxpayer money and government resources to support the burning of fossil fuels is helping industry harm us,” asserted Sujatha Bergen, senior adviser to the NRDC Action Fund. “It is well past time to end taxpayer support for these wasteful and outdated technologies that are so destructive to communities and nature.”

The fossil fuel subsidies rally follows a series of actions by the youth-led Sunrise Movement on Monday that led to arrests outside the White House. Those campaigners were sending Biden and Congress a message on evolving infrastructure legislation: “No Climate, No Deal.”

The Indigenous Environmental Network, in collaboration with other climate groups, is planning a protest for Wednesday morning that will include blockades of White House entrances to demand the president and federal lawmakers “cease all fossil fuel infrastructure running through affected communities, like Line 3 pipeline, and the Mountain Valley Pipeline.”