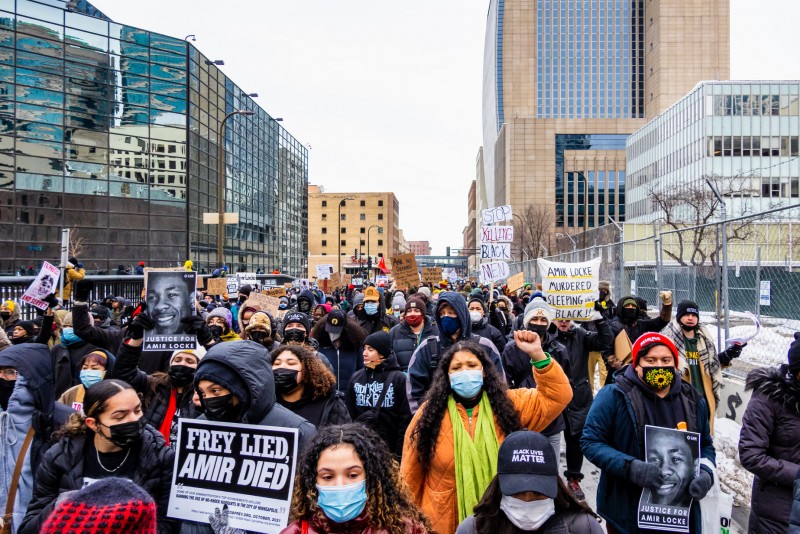 Minneapolis, MN – Around 5000 people marched in protest here February 5, to demand justice for Amir Locke, a 22-year-old Black man murdered by police on February 2. Police were carrying out a no-knock search warrant on the apartment where Locke was sleeping and shot him three times, nine seconds after they snuck open the door. Protesters demand jail, prosecution and murder charges for the officer who shot Amir and those who planned the raid; an end to no-knock warrants; and the resignation of the Minneapolis Police Chief Huffington and Mayor Frey.

There have been multiple protests since the murder of Amir Locke, including a 100-plus vehicle car caravan through downtown, organized by CAIR-MN the night before Saturday’s protest.

The February 5 protest was initiated by the Twin Cities Coalition for Justice 4 Jamar (TCC4J), endorsed by over a dozen groups. Amir’s father Andre Locke and other family member were the featured speakers.

Demonstrators have traveled through Minneapolis in a car caravan to demand change after the killing of a young African-American man during a botched raid on his apartment.

The caravan, which was organized by several police accountability groups, including Communities United Against Police Brutality and the Racial Justice Network, met at 6 p.m. at the Target store at 2500 E. Lake Street.

An hour later, some in the caravan that gathered outside a Cedar-Isles-Dean location believed to be the home of interim Police Chief Amelia Huffman, chanted the names of Amir Locke and Breonna Taylor, a Black woman who was killed by Kentucky police during a no-knock warrant in 2020.

The participants also demanded the resignation of Huffman. “We’re asking for her job,” said activist Toussaint Morrison over a microphone outside the home.

While he was speaking, flameless candles flickered in the snow, illuminating white crosses that bore Locke’s name.

Locke was shot Wednesday by officers carrying out a search warrant on the apartment in the northern US city, where the police killing of George Floyd in 2020 sparked nationwide protests against racism and police brutality.

Video of the incident shows an officer using a key to unlock the door and then a SWAT team entering the apartment while shouting, “Police, search warrant!” They open fire as soon as Locke, sleeping on a couch, starts to rise from beneath a blanket, with a gun in his hand.

The total time between the officers’ entrance and the shots fired was less than ten seconds. Locke died from his wounds in hospital. An incident report said he had two wounds in the chest and one in the right wrist.

The latest protest comes after hundreds of protesters held a demonstration in downtown Minneapolis on Saturday demanding justice over Locke’s death.